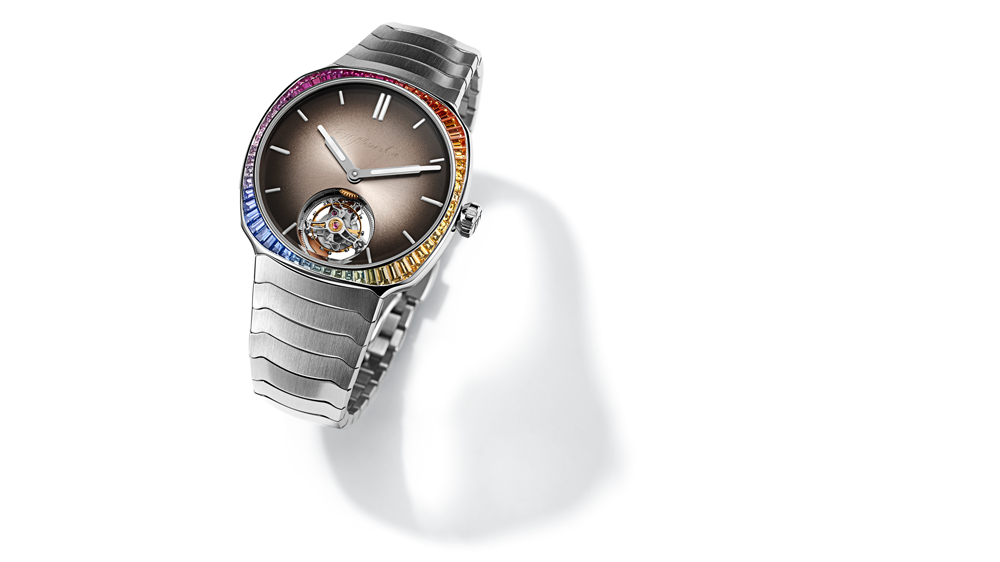 If anyone can make a tourbillon with a rainbow sapphire bezel look minimalist, it’s H. Moser & Cie.

The 40 mm Streamliner Tourbillon Rainbow pairs what may be watchmaking’s two most extroverted elements with a minimalist dial—subtle indexes, no logo, hands only—and the result is a very streamlined Streamliner. The hugely popular rainbow trend involves setting a gradient of multi-colored fancy sapphires into the bezel, in either round or baguette cuts. Selecting the right color stones for the setting is a serious undertaking and if one isn’t careful, it can look a bit neon. But in Moser’s hands the halo of brightly hued gems encircling the Vantablack dial executes the right amount of glow. Vantablack is the name given to Moser dials with super-black coatings, rated as the world’s darkest material. The name is a combination of the acronym VANTA (vertically aligned nanotube arrays) and the color black. Set in 5N red gold, this rainbow offers all the warmth and richness one would want from this kind of showpiece while maintaining a certain level of elegance.

But Moser didn’t forgo the chance to highlight its other claim to fame, its well-known fumé dial. The effect is that it starts out light in the center and gradually darkens at the edges, which seems like a perfect pairing for a graduated bezel. This dial treatment is offered on the steel version—a more subtle take for those that shy away from a fully gold bracelet timepiece.

The hour and minute hands on both versions are filled with Globolight inserts, a ceramic-based material that contains Super-LumiNova which Moser pioneered for use on watch hands. In case it isn’t already obvious that this is pure Moser (the brand is known for its playful modern attitude), the fumé dial on the steel version has an invisible logo that appears and reappears according to the light.

But what makes the dials pop of course are the sapphires, which are cut as tapered baguettes. Each gem is cut differently to fit the space between the cushion-shaped case and the round dial. The bezel is set with 60 red, orange, yellow, blue and purple sapphires—the pinks and greens that are present in most rainbow bezels are left out here, which makes for a cleaner, less glaring result. The gems are also more gradient than most assortments. One hue flows seamlessly and gradually into the next, creating an ombré effect that is quite understated.

The other star of the show, the escapement, is a one-minute flying tourbillon, so there is no upper bridge to dominate or take space on the dial. The automatic HMC 804 caliber is equipped with a double hairspring designed and produced in-house by H. Moser & Cie.’s sister company Precision Engineering. It improves accuracy and isochronism, which makes the watch more reliable and energy efficient. It has a three-day power reserve. The red gold version is priced at $175,000 and the steel, at $119,900.