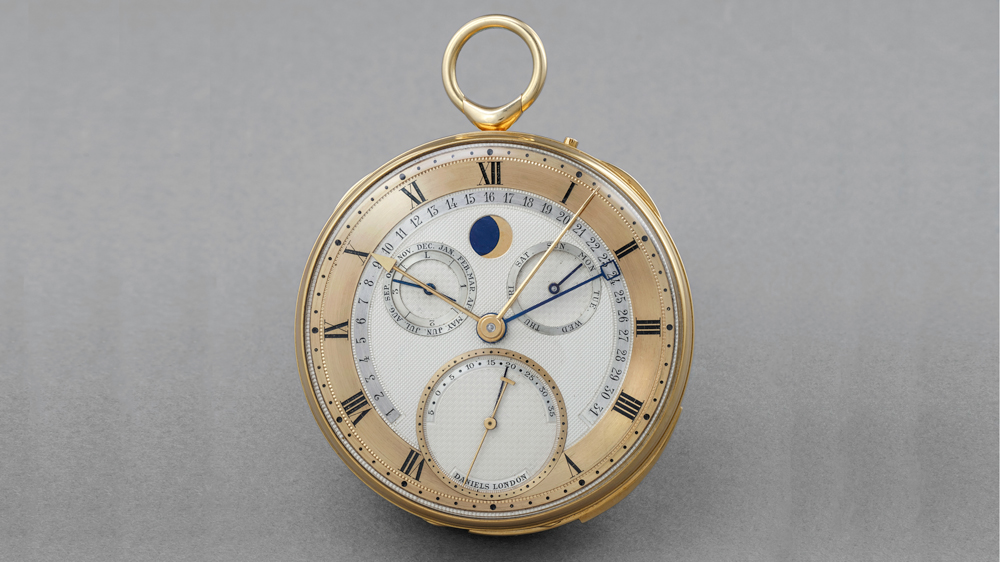 Photo: Courtesy of Phillips in Association with Bacs & Russo

One of the most important pocket watches in modern horology is coming up for sale. The most complicated timepiece ever made by the late master George Daniels—who passed away in 2011 and is largely considered the most important watchmaker of his time—is hitting the block this May at Phillips. The pocket watch will be part of the Phillips Geneva Watch Auction: Nine on May 11 and 12 and has an estimate in excess of 1.5 million CHF (approximately $1.5 million at current exchange). It will likely go well above that number—a George Daniels Space Traveller pocket watch sold at Sotheby’s in London in 2017 for $4.3 million (having doubled in value since its last sale at auction in 2012). The Daniels Grand Complication pocket watch from Phillips is important not only because of its level of complication; it’s also hugely significant in provenance: It was a timepiece Daniels valued enough to keep for himself.

The self-taught genius made only 23 pocket watches and four wristwatches in his lifetime (not counting some wristwatches made in his later years with his apprentice, Roger Smith). Each timepiece was made by hand—a feat which cannot be underestimated in modern times, when most of the elite watchmakers cannot lay claim to making every single component themselves. Daniels’s watches are simple and elegant masterworks of technical accomplishment.

The Daniels Grand Complication is part of Phillips’s initiative to feature independents. “In our past two sales, we’ve had sections devoted to independent watchmakers, these little artisans making a complicated watch a year, who are up against the big companies,” says Phillips watch specialist and head of sales at Phillips in Geneva Alexandre Ghotbi. As a result of their rarity, they are becoming more and more popular.

George Daniels is perhaps the demigod of the independents. Born in Britain in 1926, he had a problematic relationship with his father, but he can thank him for one thing: As a child, Daniels opened the case of his father’s pocket watch, marveled at the inner workings, “and fell in love with it,” Ghotbi says. “He started to teach himself how to take things apart and put them back together again.” He was only 5 years old.

Without any formal training, Daniels could fix his friends’ watches, a hobby he developed as a teenager during his stint in the British army. Upon leaving the armed services at 22, he took his £50 stipend to buy tools and set up his own watch repair shop. “He was skilled with anything mechanical—he would repair bicycles, movie projectors, cars,” Ghotbi said. In fact, it was through his work repairing and restoring cars that Daniels met Cecil Clutton, a wealthy petrol head who introduced Daniels to the world of master watchmakers that came before him, like Britain’s Thomas Tompion and John Harrison and, especially, Switzerland’s Abraham-Louis Breguet.

“He wanted to surpass Breguet, the greatest watchmaker of all time, who invented everything,” says Ghotbi, whether that was improving upon Breguet’s tourbillons or his guillochage techniques. So Daniels created his first watch, totally by hand, “the dial, the case, the chain, every wheel and cog.” He began in 1968, and it took him two years.

More watches followed, never made on commission but as exercises for Daniels to work out different complications. He was especially entranced with escapements, and each of the watches has a different version of one. The most famous was the coaxial escapement with a tourbillon, which reduces the friction of parts that transmit energy to the other components of the watch, reducing the need for servicing the movement and providing greater accuracy and stability over time. Incredibly, Daniels developed this complication in the midst of the quartz crisis of the 1970s. Ghotbi calls it “the greatest horological invention of the last 200 years.” It would take Daniels two and a half decades before he sold his invention to Omega in 1999, and it has been used in some of their high complication watches ever since.

The Daniels Grand Complication includes a coaxial escapement with a tourbillon, but on top of that feat it also includes an array of other difficult complications to create—even more so when you consider every element was handcrafted by the master himself. The watch is also equipped with an instantaneous perpetual calendar (his first) with a retrograde date, a minute repeater (another first for him), a thermometer, an equation of time, and a power reserve indicator.

“For any lover of independent watches, this is the ultimate,” Ghotbi says. “Once you have this, what else is there?”