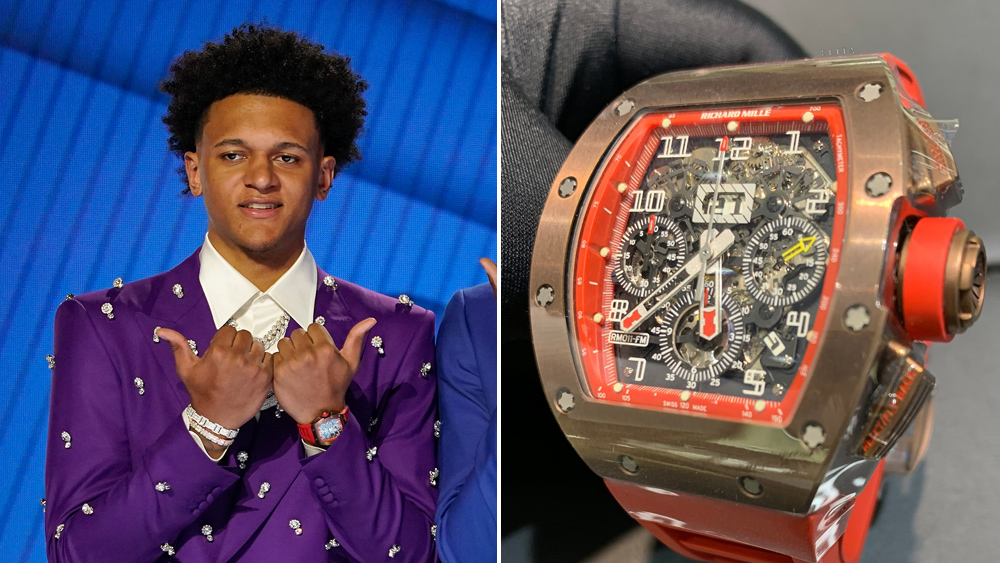 Paolo Banchero may be new to the NBA, but he’s already dressing like a superstar.

The 19-year-old power forward, whom the Orlando Magic picked first during the league’s draft on Thursday night, showed up wearing one of the evening’s boldest looks. His purple Dolce & Gabbana suit adorned with rhinestones may have grabbed all the headlines, but what really caught our eyes was the Richard Mille on his wrist.

There are few better ways to illustrate the way Banchero’s life changed over the last 24 hours than by looking at his watch, which was first spotted by Nick Gould on Instagram. Like most Duke basketball players, we imagine he lived a pretty charmed life during his year on campus, even if it ended with a heartbreaking loss to the school’s arch-rivals, the University of North Carolina Tar Heels. Still, he probably didn’t spend much time wearing a watch that carries a six-figure price tag.

Banchero didn’t specifically mention his watch while talking about his outfit on the red carpet before the annual event, but it looks remarkably similar to a limited-edition RM 011 FM from 2013. That watch was designed in collaboration with Brazilian Formula 1 racer Felipe Massa. It has a tonneau-shaped 40 mm by 50 mm case made of titanium that’s been coated in bronze ADLC and a red rubber strap. Its dial is bordered by a red tachymetric scale and features white Arabic numerals, skeletonized hands, a running seconds indicator at 3 o’clock, a 12-hour chrono register at 6 o’clock, 60-minute countdown timer at 9 o’clock and a double date indicator at 12 o’clock. The timepiece is powered by the watchmaker’s calibre RMAC1 automatic winding movement, which has 68 jewels and a power reserve of 55 hours.

The exclusive RM 011 FM is one of just 30. Because it’s been off the market for nearly a decade, the only way to score one is on the secondary market. The James Edition currently has one up for sale, but you’ll have to reach out to the seller for a price. A similar example is available from Luxury Watches USA for $285,000. While that may have been out of Banchero’s reach last year, it’s not anymore. The rookie will likely make around $10 million during his first season in the league.