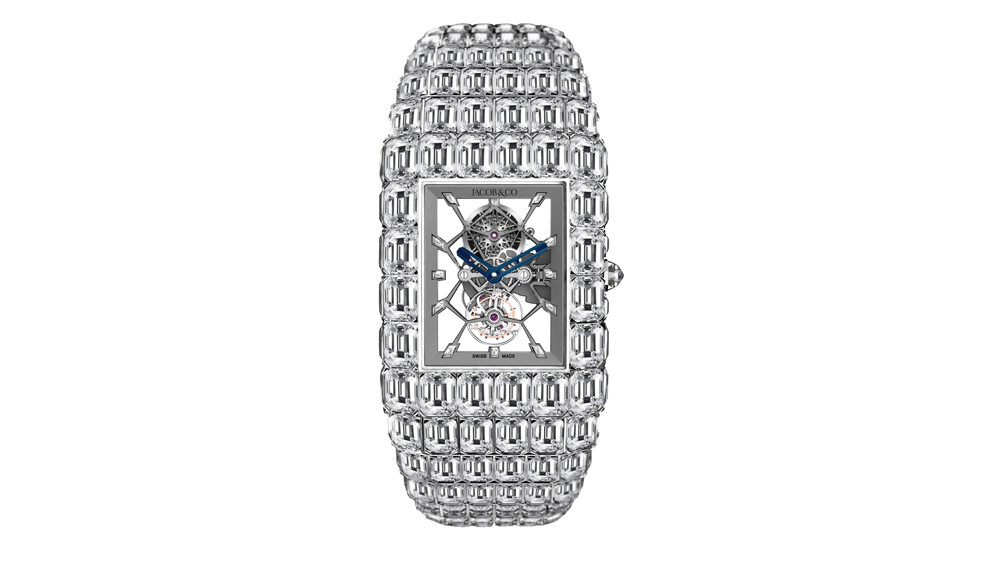 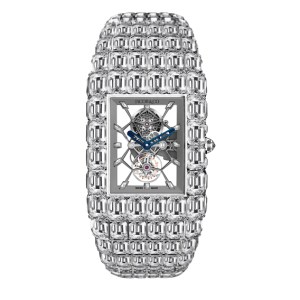 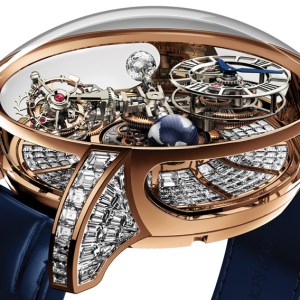 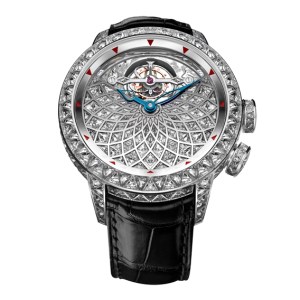 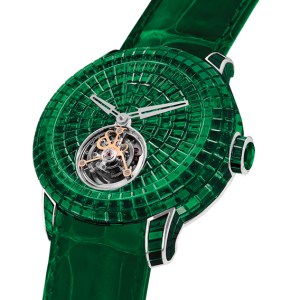 Immortalized in hit songs by Kanye West and Jay Z, hip-hop’s horologist extraordinaire, Jacob Arabo (via his company Jacob & Co.) has created five new over-the-top timepieces for the High Jewelry Masterpiece Collection. Each of the one-off watches is a testament to Arabo’s intricate artistry, as well as to why many in the music industry have nicknamed him “Jacob the Jeweler.”

Arabo’s Astronomia Tourbillon Baguette is an homage to the orbital precision of our solar system. Under a sapphire dome and set against a backdrop of 342 white baguette diamonds, the triple-axis tourbillon sits in fixed rotation alongside a seemingly floating dial, a hand-painted titanium Earth, and a moon made from one Jacob Cut, 288-facet spherical diamond that turns every 60 seconds on an independent axis. All four components make a full rotation every 20 minutes.

Celebrating heavenly bodies of another kind, the Caligula Tourbillon Baguette takes its inspiration from the erotically themed timepieces of the 17th century. With a filigree that is meant to suggest fishnet stockings, the 18-karat, white-gold case and face are textured with triangular baguette diamonds. A rather graphic scene painted by artist André Martinez is exposed only when the wearer turns the crown positioned at 4 o’clock. When the scene is hidden from view, a Côtes de Genève–finished tourbillon is visible.

Sure to make others green with envy, the Caviar Emerald Tourbillon is the culmination of a two-year search for its gems, followed by another year to set them. The watch’s dial is set with 140 baguette-cut emeralds while an additional 232 grace the 18-karat, white-gold case. Not to be left out, the strap’s tang buckle carries another 36 baguette emeralds of its own. With its flying tourbillon set on the face at 6 o’clock, the rest of the manual watch’s movement—which carries a 100-hour power reserve—is visible through a sapphire crystal caseback.

The Brilliant Art Deco D-Flawless is a tribute to an architectural style that, like Arabo himself, is known for ornate design. The 18-karat, white-gold case is adorned with 267 D-Color Internally Flawless diamonds, while the movement’s bridges have been set with 178 brilliant-cut Fancy Intense Pink diamonds. To top it off, a rose-cut diamond sits atop the crown, and 20 baguette diamonds adorn the alligator strap.

Priced at $18 million, the aptly named Billionaire is one of the most expensive watches ever sold at retail. The result of Arabo’s collaboration with Flavio Briatore of Formula 1 fame—as well as the founder of Billionaire Italian Couture—the tony timepiece’s jewel-bedecked design reflects the extravagance of the early 1920s. The exterior is covered in 260 carats of emerald-cut diamonds—some weighing up to three carats apiece—that have been individually mounted on 18-karat, white-gold beads that match the 18-karat, white-gold case. The watch’s skeletonized tourbillon movement has a sandblasted finish and a 72-hour power reserve. Aside from the latter watch, prices for the other models are available upon request. (jacobandco.com)