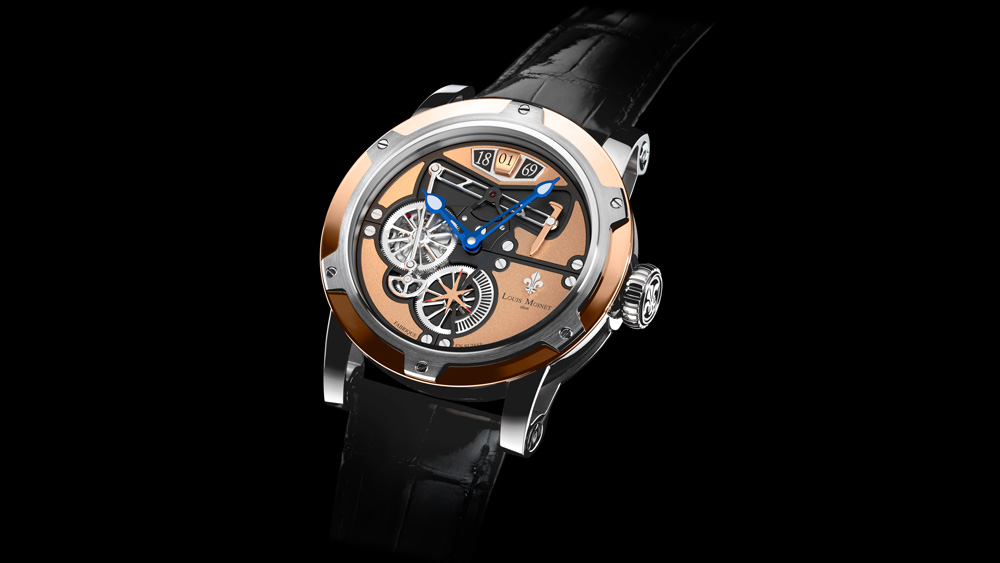 The story of how the first transcontinental railroad was built is among the defining moments of American history: As the Civil War raged on, the Union Pacific and Central Pacific companies laid tracks from Sacramento, Calif., and Omaha, Neb., respectively, finally meeting at Utah’s Promontory Summit on May 10, 1869. The six-year effort connected the West coast to the burgeoning nation’s existing railroad network, signaling the dawn of a new era in American expansion.

All of which makes the Transcontinental timepiece by Swiss watch brand Louis Moinet all the more interesting. Dedicated to the pioneers who helped break boundaries as well as modern-day heroes, the model is available through pre-order between now and Sept. 10.

Although Louis Moinet was a French watchmaker, scholar and astronomer who died 16 years before the railroad was complete, Jean-Marie Schaller, the CEO and creative director of the contemporary brand inspired by Moinet’s inventive approach to watchmaking, felt that paying tribute to American ingenuity was in line with the brand’s commitment to celebrate the spirit of human adventure.

“Louis Moinet was made of the same vein, and our homage is due to this common DNA,” Schaller says. “Recently, we manufactured a watch bearing the name of Alexey Leonov, the first spacewalker. When you listen to a hero and discover the amount of courage it took him to perform his feat, I find it very moving.”

The Transcontinental by Louis Moinet features a unique symbol to mark the coupling of the two locomotives at Promontory Summit: An automaton that reproduces the Golden Spike used to designate the point where the last bits of track were laid.

The rose-gold-colored dial, bearing a more saturated color thanks to its high copper content, features a frosted finish and a contrasting black plate. At 12 o’clock, the engraved model number is framed by the year 1869.

The commemorative watch, which is scheduled to deliver this fall in a special box designed to mimic the piping of a steam locomotive, comes in two limited editions: 18 pieces in rose gold and 69 in steel and rose gold. Those who pre-order will be invited to select a custom number (on a first come, first served basis) and will further benefit from lower pricing: The rose gold model is available for $57,500 and the steel and rose gold for $38,500. “It should be born in mind that the retail price fixed after the pre-order period will be higher,” according to Schaller.