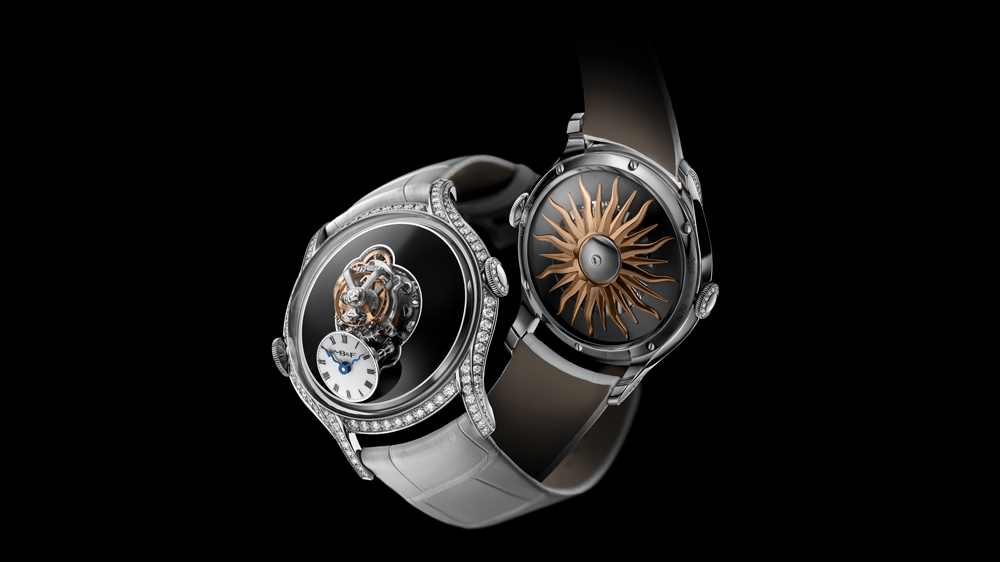 “Men don’t understand women, so I thought, ‘How am I going to do this?'” said MB&F founder Maximilian Büsser when he showed Robb Report a sneak peek of his first women’s timepiece  last year. The independent watchmaking company is known for turning out technologically advanced and wildly unconventional timepieces that sit like spaceships on the wrist. They draw serious male watch enthusiasts that want something outside the mainstream. But after 14 years of business, Büsser decided to step outside of his comfort zone. “I’ve been creating pieces only for myself the last 15 years,” said Busser. “It’s been great, but at some point I thought, ‘How am I going to create for somebody else?’ I’m surrounded by women in so many ways —my mom, my wife, my two daughters—I wanted to do something that they would be proud of so I decided to take an enormous risk and create my first timepiece for a woman.” Turns out Büsser understands women better than he thinks.

The new Legacy Machine Flying T is every bit as inventive and visually appealing as his men’s creations, but Büsser managed to boil down his technical and imaginative creation into 38.5 mm by 20 mm which resulted in a surprisingly cool, yet still elegant ladies watch that looks unlike anything else on the market. Innovation, however, does not come easy. Büsser said that initially he went all over the board, whipping up a flurry of creative designs, but every time he took them to his engineers they came back with monster-size prototypes that Büsser said even he couldn’t wear. “I finally stripped it down to something as elegant as I could while being 3D and so this is the baby,” said Büsser. And that baby is a beauty. Even traditionalists will be hard-pressed not to like it.

Set within domed sapphire crystal glass and a white gold case set with diamonds is flying tourbillon beating at 2.5Hz at the heart of the timepiece. It sits perched high above the “engine” of the watch, which has 100 hours of power reserve, in a column that stops just sort of its glass ceiling. A single large diamond rotates simultaneously with the flying tourbillon. The actual dial, which comes in either black or white lacquer, sits at a 50-degree tilt at 7 o’clock and features blued gold serpentine hands for the hours and minutes. That position has a purpose other than a cool design—it’s placed at an angle so that only its wearer can read the time. Büsser describes the 3D construction as “a little city” and, indeed, it looks like a tiny metropolis for the wrist. The little city rests on a dial plate that can come in either a black lacquer ($115,000), brilliant-cut diamonds ($145,000), or baguette-cut diamonds ($315,000). The latter version comes with baguette-cut diamonds on the case as well.

Beneath the 3D architecture, the automatic watch is wound via a rotor fashioned like a 17th-century Louis XIV-style sun. Always drawing references well beyond the confines of traditional watchmaking (previous men’s pieces have taken inspiration from jellyfish to aliens), the sun rotor and the column construction of the 280-part movement are more than just technical architecture, they represent the power of womanhood—life-giving and support.