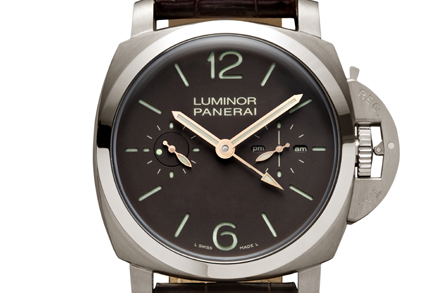 The 140-year-old Italian watchmaker Panerai will open its first New York boutique in early December at 545 Madison Avenue. It’s the latest in a series of store openings worldwide that includes Portofino, Florence, Hong Kong, and Shanghai. Known for its sleek, sporty styling, the watchmaker will emphasize its signature Manifattura timepieces, which feature Panerai’s own movements. Featured in the collection is the Luminor 1950 Titanium Tourbillon GMT, shown, which has a P.2005 caliber executed entirely by Panerai. (www.panerai.com)