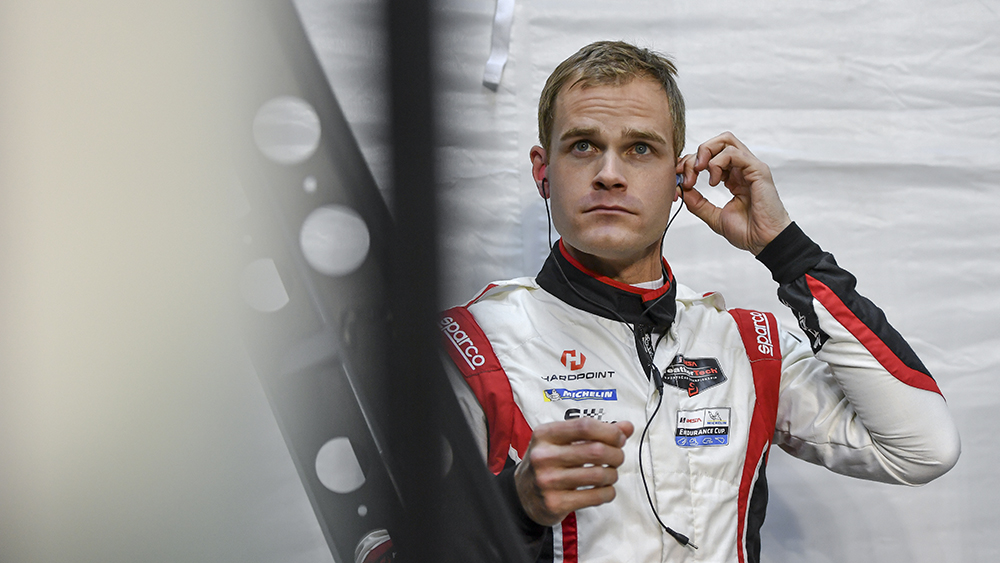 As a second-generation jeweler, 33-year-old Nick Boulle, president of De Boulle Diamond & Jewelry, splits his time between his family’s sprawling 13,600-square-foot retail empire in Dallas, just off the city’s prestigious Preston Road, and its recently opened second, 3,500-square-foot store in Houston’s posh River Oaks District. The retailer is known for exceptional diamonds and watches—Patek Philippe and Rolex have dedicated showrooms in the Houston location—and both boutiques have become go-to destinations.

When he’s not working the floor and acting as gatekeeper to De Boulle’s coveted inventory, Boulle can be found strapping in behind the wheel at professional racecar competitions such as the Rolex 24 at Daytona and 24 Hours of Le Mans in France. Not surprisingly, both his vault and his garage keep pace with his life in the fast lane. Here’s how he rolls.

Boulle in his Dallas showroom with the current Indy 500 lap record holder that was driven by Eddie Cheever Jr.  Jennifer Boomer

A good friend of mine who was in the Marines started a charity called Ride for Your Flag. It’s a 2,226-mile motorcycle ride, attended primarily by military veterans, from Texas to Montana. He lent me a Ducati 1200 Hypermotard, and I went along with the crew and helped raise money.

The ability to be in two places at once… or maybe three or four places.

My dad and I love old cars. Most cars nowadays have an electric fuel pump. On vintage cars, you have to prime the fuel pump: Pull the choke, pump the throttle five or six times, let it turn over. The engine runs and runs and runs, and then it comes to life.

I’m not much of a shopper. I do have a pair of pants from Brunello Cucinelli that have lasted five or six years. And I run four to five miles a day, so I’m always buying new running shoes. I like a lot of what [Zurich-based brand] On has done.

When I’m in a racecar, that’s when nothing else is coming in. And another time was when my fiancée and I went to Aspen. I love horses, so I booked us for a four-hour horseback ride. When we got on the trail, we had no cell service. We ended up out there for six hours.

Cap Juluca in Anguilla. That was probably the best experience I’ve ever had at a hotel.

I bought myself a stainless-steel Rolex Sky-Dweller for my 30th birthday.

How many watches do you own?

I think I have seven. I have a couple of Rolexes. I have a Tudor that was a limited edition of 25 that we did for sponsors when we went to Le Mans. I have a Girard-Perregaux. It’s one of the OG Laureatos made in cooperation with Ferrari, so it has the outline of the F40 on the back. I’m working toward a Patek. My dad and I share his Patek Philippe Ref. 5204 in rose gold and a Ref. 5712/1A. Those are two of my favorites, especially the movement on the 5204.

What watch are you wearing right now?

My steel-and-gold Daytona that I won at the 24 Hours of Daytona.

I like to read before going to bed. It helps me switch off. I just finished Billion Dollar Whale. Earlier this year, I read Extreme Ownership. That was an interesting book.

What are your regular tables in London, New York and LA? And let’s throw Dallas and Houston in there.

Can I throw Paris in there, too? My favorite restaurant in Paris is L’Avenue. In New York, I like the small Cipriani [on West Broadway]. In London, Chiltern Firehouse. In Houston, I love the food at Le Colonial and Bludorn. And in both Dallas and New York, I like Le Bilboquet.

What is the car you’re most attached to?

Our Porsche 911 Speedster—a 2019 GT3. You’re never going to take it to the racetrack, but it’s just fun everywhere.

I write thank-you notes by hand, and I save all of the notes that people give me. When is an appropriate time to throw away a note that someone gave you for a special occasion?

What was your last streaming binge?

What’s your wine of choice?

My racing helmets. When you’re in a car, that’s your identity. Yellow is our corporate color, so one of my helmets has a pearl-white ring and it’s in De Boulle yellow. I spent, and I’m not exaggerating, seven months determining exactly how I wanted it to be.

Boulle and his wife, Allison, in Aspen.  Courtesy of Nick Boulle

What was your favorite children’s book growing up?

What are you afraid of?

What music makes you smile?

I’m a big fan of Maroon 5 and things like Kygo and chill house music.