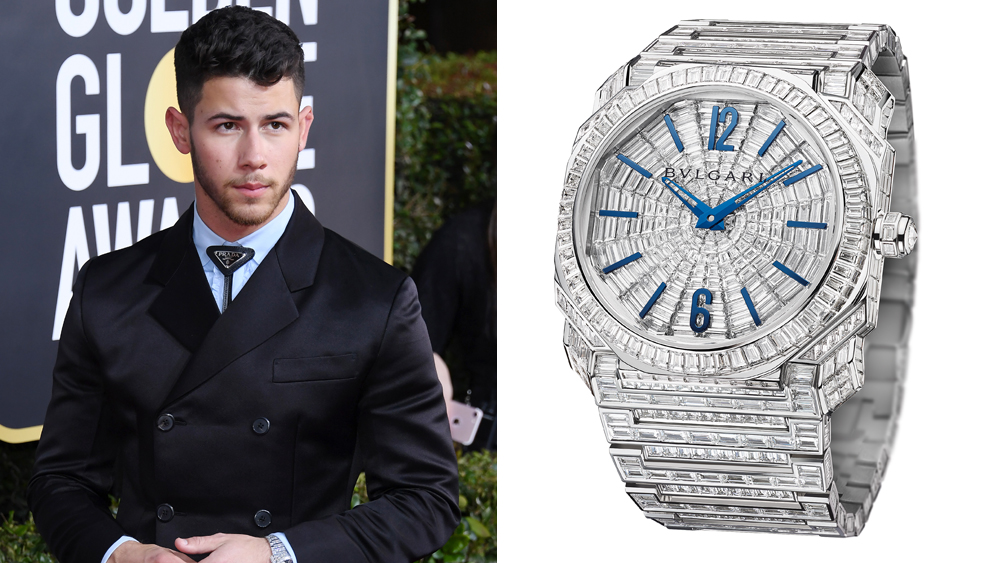 We’re only a few days into 2020, but if the past couple of weeks have been any indication, it’ll be a very good year for all the watch aficionados amongst us. Just when we thought things couldn’t get any more luxe than the diamond-studded Rolex Cristiano Ronaldo wore to a sports conference in Dubai, Nick Jonas decided to nudge the gilded bar just a bit higher with his own timepiece at the Golden Globes.

Besides the Western-inspired Prada tie that Jonas donned to accessorize his double-breasted tailored satin look, the truly standout addition was the Bulgari Octo L’Originale Blue Full Baguette Diamonds watch wrapped around his wrist. As its name suggests, this particular style has a hefty dose of diamonds—so many, in fact, that its price tag exceeds $1 million.

With 1,172 twinkling white baguette diamonds weighing 50.25 carats—radiating from the center of its face, around its case and running the full length of its bracelet—the watch is a true stunner that veers confidently into the realm of fine jewelry. And all of those precious stones are set into 18K white gold––though it is minimally visible beneath all those gems.

Despite its awe-inspiring faceted surface, this model has a remarkably clean silhouette created through a clever design approach. Fabrizio Buonamassa Stigliani, Bulgari’s head of watch design, told Hodinkee that instead of altering the silhouette of the watch to fit the stones, he and his team chose to fit the stones to the existing case. Stigliani noted that this was especially difficult as he chose to only use baguette diamonds for the design, which had to be incredibly small near the center of the face and grow gradually larger all while maintaining consistent geometry. Only one round stone was used, and it was set into the crown.

The watch’s over-the-top, diamond-studded design lends the piece a kind of Roaring ’20s flare. Though perfectly suited to modern times, it’s not difficult to imagine Jay Gatsby wearing one alongside his favorite tuxedo. So, at the very least, you’re in good company, Nick.