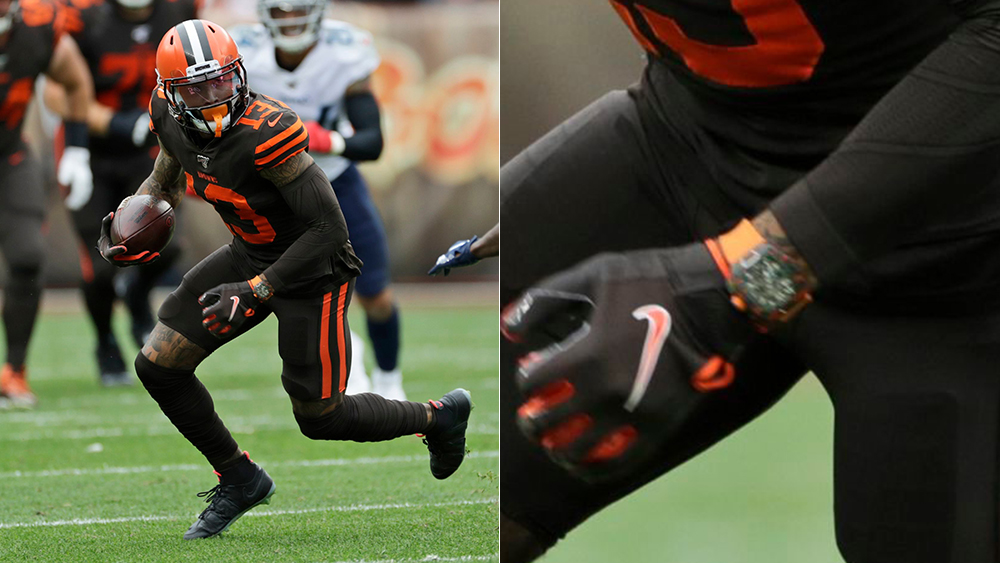 Wearing a Richard Mille watch while taking in a sporting event from the best seat in the house is quite the flex, but wearing one while actually playing in the game? That’s on a completely different level. So leave it to Odell Beckham Jr., the NFL’s reigning fashion superstar, to show off his favorite timepiece while playing in the Cleveland Browns’ season opener.

The wide receiver sent the internet into a tizzy after fans realized he was sporting a watch while hauling in his first seven receptions for the Browns against the Tennessee Titans on Sunday afternoon. But even more rare than an athlete wearing a watch while playing a contact sport was the timepiece OBJ decided to show off—a Richard Mille RM 11-03 McLaren Automatic Flyback Chronograph.

The result of a collaboration between the Swiss watchmaker and British automaker McLaren, the RM 11-03 McLaren Automatic Flyback Chronograph made its debut at the 2018 Geneva International Motor Show. Referred to by the company as its “take on the Gran Turismo,” the flyback chronograph was designed with McLaren’s “attitude in mind,” and features a unique Carbon TPT and orange Quartz TPT case that matches the Browns’ colors perfectly. Beckham Jr. has been seen wearing the RM 11-03 several times since the New York Giants traded him to the Browns in March, including at the ESPYs, on the cover of Sports Illustrated’s 2019 NFL preview and during drills before a pre-season game last month.

Other features of the watch include a skeletonized, automatic winding RMAC3 caliber movement, a variable geometry rotor with 18-karat white gold weight segment, variable inertia balance, baseplate and bridges made from ultra-strong grade-5 titanium, an oversized date display and a 55-hour power reserve (or 45 when the chronograph’s running). With features like that, it’s easy to see why the receiver thought it could withstand the rigors of a full-speed NFL game.

Unfortunately for Beckham Jr., his daring timepiece choice didn’t translate to success on the field. While he caught seven passes, he only totaled 71 yards and failed to reach the end zone. His team fared even worse, with the Browns, a trendy pick in the NFL coming into this season, falling 43-13 to the unheralded Titans. But don’t blame his Richard Mille for that. Rafael Nadal was wearing one of the company’s watches—his signature model, actually—when he won his fourth US Open, and 19th Grand Slam title overall, later that night.