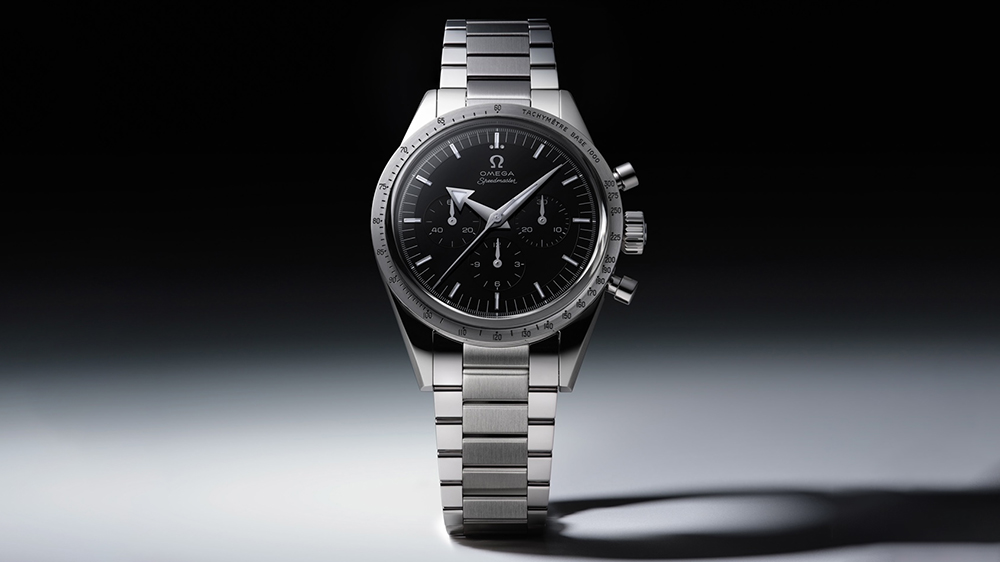 To celebrate the 65th anniversary of its most famous watch, Omega has released a very special new edition of the Speedmaster for collectors with spending power to match their eye for style. The 38.6 mm piece is crafted from an proprietary 18-karat white-gold alloy that includes platinum, rhodium and palladium, termed Canopus Gold. Part of Omega’s Calibre 321 series (more on that later), the watch’s black onyx dial stands out amidst the precious metal displaying its vintage Omega logo and typography of an oval “O” (a detail used for the first Speedmaster models). There are also 18-karat white-gold hands, indexes with Canopus Gold PVE treatment, and of course the three classic Speedmaster subdials.

Something interesting has happened to the bezel which, as you may know, usually features a tachymeter scale, originally designed for racing drivers to time average speeds on the track (the Speedmaster was the first watch in the world to feature the scale in this way). For this 321 iteration, the numerals on the bezel are filled with black “Grand Feu” enamel, an arduous process of fusing glass powder to metal. Omega fans will spot two other nods to the original model, known as CK2915-1—the dot over the number 90 and a dot diagonal to seventy.

So back to that Calibre 321 movement used in the 1957 model and famous for powering the watches worn during the Apollo missions—in other words, all six moon landings. Omega brought the calibre back into production in 2019 with much fanfare and its original specs. The manual-winding chronograph movement features a column-wheel mechanism, a Bregeut balance spring, and a 18-karat SednaTM gold PVD-coated finish. This Speedmaster also offers a 55-hour power reserve and water resistance of up to 200 feet.

Through the model’s open caseback, you’ll spot an engraving of the Omega hippocampus, which has been commonly used as an icon by the watchmaker since its first Speedy. For this edition, the creature has a blue sapphire eye—a traditional jewel choice for 65-year celebrations, so we’re told.

Priced at $81,000, the watch comes in a wooden box inspired by the original Speedmaster containers. Not a limited edition, it will, however, only be available in Omega boutiques by June. Visit Omega.com for more information.