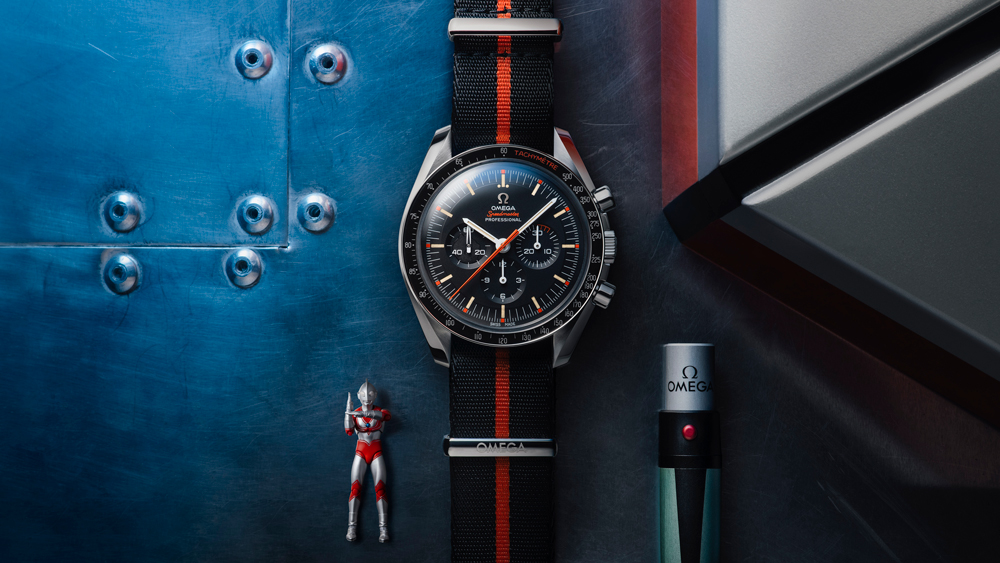 Omega launched its second “#SpeedyTuesday” timepiece exclusively on the brand’s Instagram this morning—which marks its second collaboration with Fratello Watches. The 42 mm Speedmaster Limited Edition Ultraman ($7,100), limited to 2,012 pieces, sold out within just two hours of the post. The new model is named after a Japanese science fiction TV series entitled, The Return of Ultraman, originally released in 1971. The show, which belongs to a Japanese genre called Kaiju (the Japanese name for giant monster), focused on a race car driver who bonds with a giant hero to battle alien threats.

The Omega Speedmaster Ultraman, a descendant of the watchmaker’s 1967 Moonwatch, which stood out for its orange seconds hand, was forever cemented in the TV show’s history when the watch, thanks to its coloration, was chosen to accent the suits of the heroic Monster Attack Team. The new Ultraman version of this Speedmaster also uses the same orange coloring on its seconds hand and added orange hour markers, and a black and orange tachymetric bezel in anodized aluminum. And since Ultraman was only able to stay in superhero mode for up to 3 minutes, the minute subdial at 3 o’clock features the first 3 minute markers in orange. On the second subdial at 9 o’clock, a secret hidden silhouette of Ultraman’s profile is revealed only through the use of a special UV light tool included with the watch. The word “Speedmaster” is also in orange, while the Omega logo has been done in its original, now vintage, design. The watch comes on either a black and orange NATO strap or a spare black leather strap.

The second #SpeedyTuesday release was formulated as part of the second series of Omega’s partnership with Fratello Watches, which began as a result of the recurring Speedmaster series posted on Fratellowatches.com every Tuesday. The first #SpeedyTuesday timepiece was released in 2017.

For hardcore vintage Speedmaster enthusiasts, the dot on the bezel positioned over number 90 used on pre-1970 Speedmasters is an added bonus.