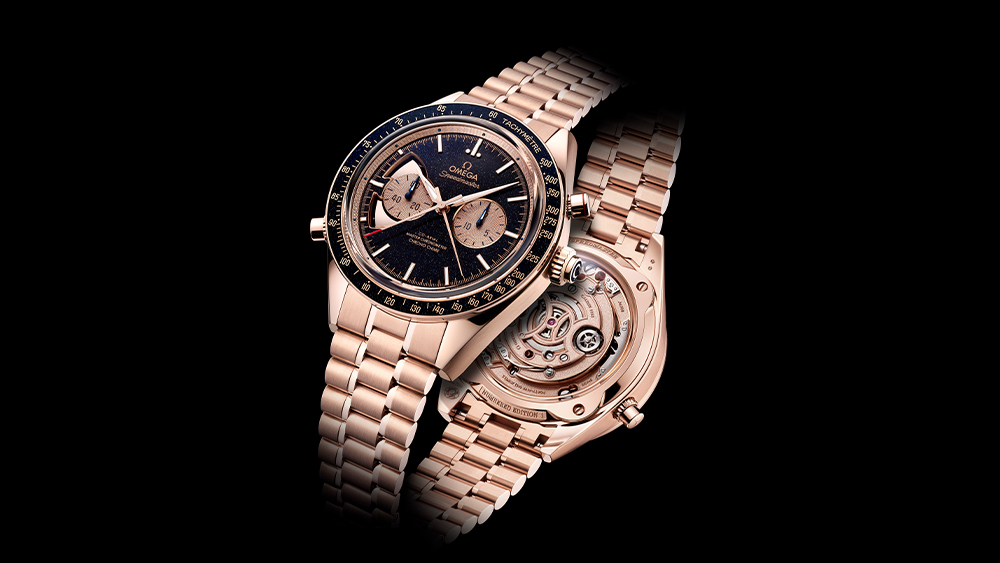 If you’ve been around the watch world long enough, you’re no doubt familiar with some of the more esoteric complications, such as split-seconds chronographs and minute repeaters. The former, for the uninitiated, features two seconds hands and is used to time successive events, while the latter incorporates tiny gongs and hammers to audibly chime the time. Each is difficult to execute — especially the minute repeater — and each is part of the catalog of most of the high-end Swiss watchmakers.

Omega has long been a master of both of these complications: Its first minute repeater was an enamel-dialed beauty from way back in 1895, and it created split-seconds chronographs to time the 1932 Olympics in Los Angeles. These days, of course, the brand is known mostly for its “tool watches” such as the Speedmaster and the Seamaster. But Raynald Aeschlimann, Omega’s president and CEO, was hardly keen to rest on those laurels. Six years ago, he began pushing the Swatch Group’s flagship watchmaker into bolder territory, challenging Omega to delve into previously uncharted waters with an entirely new complication.

Well, here you have it: The appropriately titled Co-Axial Master Chronometer Calibre 1932. This incredible new caliber—the result of a single Omega watchmaker’s efforts—is beyond anything the maison has ever designed and built before, with respect both to conception and engineering. The 1932 is a split-seconds chronograph that audibly chimes elapsed time, and it does so using a METAS-certified movement that runs at 5 Hz, which is the territory of high-beat movements such as Zenith’s famed El Primero. It utilizes a mind-blowing 575 components without counting those for the gongs, and required the filing of 13 patents. (Four more were necessary for the case of one of the watches into which the movement is fitted—more on that in a moment.)

As it wasn’t possible to simply re-engineer another Omega movement to run at 5 Hz and include this new complication, the brand’s engineers had to begin from scratch, resulting in the most complicated Omega caliber ever produced. Working with Blancpain—Omega’s sister company within the Swatch Group—the brand was able to develop a sort of mechanical computer to seamlessly mesh the chronograph and minute repeater functions together.

Having it run at 5 Hz was essential, as the watch needed to display 1/10ths of a second, like the split-seconds chronograph stopwatches from the 1932 Olympic Games. Additionally, Omega’s team needed to add a chiming section with a security function that would prevent the wearer from accidentally repressing the wrong actuator. Without such a safety system, it could potentially damage such a delicate movement.

But there’s more. In order to achieve Master Chronometer status, Omega had to use 50 non-ferrous components, replacing typical metal parts with silicon and other alternatives. The manufacture managed all this, and with flying colors: The finished movement is beautiful to behold, and unlike anything the brand—or any other brand, frankly—has released before. It features both satin brushing and mirror-polished textures, as well as nearly 50 grams of gold. And it sounds like a dream, with three separate gong sequences that ring the time. (A low gong sounds the minutes, a double-gong sounds 1/6th-minutes, i.e. 40 seconds, and a high gong sounds the seconds.)

But enough about a movement. Where does this caliber fit into the greater Omega catalog? The answer is actually two different watches: The first is the Olympic 1932 Chrono Chime, which combines elements of Omega’s 19th-century minute repeater and its 1932 split-seconds chronographs. Housed in an 18-karat Sedna Gold case, it has the look of an antique pocket watch conversion/early wristwatch—but upon careful inspection, the Calibre 1932 pokes through. Take a look at 5 o’clock and you’ll notice a chime pusher protruding from the case that’s used to actuate the repeater function, while a separate pusher at 11 o’clock controls the split-seconds function.

A “Grand Feu” enamel dial features a handmade, silver guilloché bezel and subdials in a unique “acoustic wave” pattern inspired by sound waves, while a 15-minute counter is situated at 12 o’clock, a 60-second counter is featured at 6 o’clock, and the watch’s dual hammers are visible in a cutout at 5 and 6 o’clock. Thoughtful touches include an 8th note motif on the chime pusher, a color-coordinated split-seconds hand and pusher, and the elegant Arabic typography and red Omega wordmark and logo of the late 19th and early 20th century.

When actuated, the watch’s dual hammers strike Sedna Gold gongs connected to the case body—this in turn produces the audible chime that corresponds to the time read on the chronograph display. (Pretty. Freakin. Cool.) Flip the watch over, and through the sapphire caseback, you can easily view the movement ticking away within. Paired with a brown leather strap with an 18-karat Sedna Gold buckle and a new, patented quick-change system, the Chrono Chime ships in a special, acoustically tuned walnut presentation box with an additional strap and two leather cords that allow it to also be worn as a pocket watch, or as a stopwatch around the neck.

If all this sounds too esoteric, there’s also the new Speedmaster Chrono Chime. The brand took the 1932 and fit it into a special Speedmaster case, meaning you can chime the time with a more modern-looking watch on your wrist—albeit one made of solid gold. Housed in a 45 mm 18-karat Sedna Gold case molded after the second-generation CK-2998 Speedmaster, which debuted 60 years ago in 1962, this Speedy features a blue aventurine “Grand Feu” enamel dial that sparkles like the night sky.

With inner bezels and sundials in 18-karat Sedna Gold “acoustic waves” patterns, it features diamond-polished, gold indexes and hands, blued CVD sundial hands, and a red-tipped split-seconds hand. The movement has been rotated 45 degrees from that of its Olympics-themed cousin, resulting in the two hammers being visible at 9 o’clock. Paired with a matching 18-karat Sedna Gold bracelet, the Speedy also features its own walnut presentation box with a special resonance plate and a sapphire display caseback.

Folks will inevitably ask themselves who the end customer is for such a watch, and it’s a fair question. Omega will only be able to complete roughly five movements per year, and the retail for each watch is “upon request”—read: multiple hundreds of thousands of dollars. Of course, such timepieces aren’t conceptualized and built merely to satisfy the most diehard Omega collectors, though certainly, they’ll have first dibs. Rather, they’re constructed in order to prove the watchmaker’s horological prowess.

“I’ve been with Omega for 26 years,” Aeschlimann said. “I remember that there was a moment where we had to reconstruct some of the [product] lines, work on new developments and also, at the same time, think about, ‘What is Omega?’ What is it? And not making just another [vintage-inspired] watch—I would not have accepted making a one-to-one copy of the minute repeater of 1895. It was, for me, creating this incredible magic that you can have with Omega by linking that [history]. That was part of the pressure and part of the discussion…because the mission was clearly Chrono Chime, or nothing.”

Indeed, the company has conceptualized and executed a completely new complication and the results speak for themselves. The resulting watches housing the movement are an exciting testament to Omega’s watchmaking expertise and an interesting new take on its history through an entirely new lens.