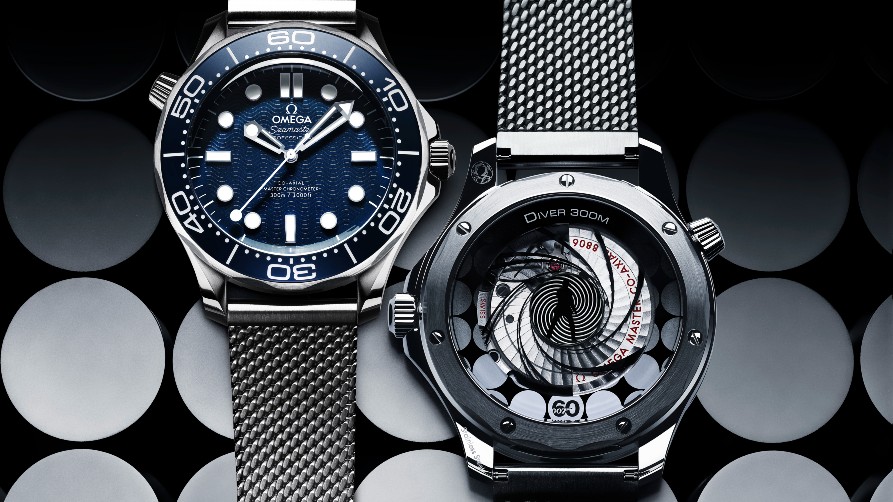 There’s no film character whose watches are quite as iconic as James Bond. More than just an accessory, his timepieces have been a symbol of status, refinement and utility throughout the franchise’s decades-long run. The spy’s 60th anniversary, happening this year, certainly calls for celebration, and who better to start the festivities than Omega, the company that’s been the official watch of 007 since 1995’s GoldenEye. Today, the Swiss watchmaker launches its latest Bond collection to commemorate the icon’s legacy, including two new models—the Seamaster Diver 300M 60 Years of James Bond in stainless steel and Canopus Gold—plus sailing bracelets and a set of cufflinks.

“I was convinced that Commander Bond, a naval man, a diver and a discreet gentleman of the world would wear this watch,” says Lindy Hemming, the Oscar-winning costume designer who chose the Omega Seamaster 300M Quartz for GoldenEye. The Seamaster 300 initially debuted 1957 and was issued to military divers around the world. A decade later, a famous batch of second-generation Seamaster 300s was delivered to the Ministry of Defense for delivery to certain units. So, it’s entirely plausible that Bond would have been issued an Omega watch.

And it’s the iconic Seamaster 300 that serves as the foundation of the 60th-anniversary models. The first iteration in stainless steel is directly inspired by the watch from GoldenEye ,with nods to the film and modern upgrades. On the front, you get the classic Seamaster aesthetic with a rich blue dial and bezel made from oxalic-anodized aluminum. The dial features laser-engraved waves, and the bezel is home to a diving scale filled with white Super-LumiNova, with the traditional inverted triangle replaced by a commemorative “60.” Flip the watch over, and you’ll find an homage to the film’s opening sequence with Bond in silhouette and a spinning gun barrel design. The timepiece is complete with a mesh-style bracelet, the same as 007’s Omega watch in No Time To Die. Inside, you’ll find the brand’s Co-Axial Master Chronometer Caliber 8806.

The second 60th-anniversary model is a bit more unique. It’s rendered in Omega’s own 18-karat Canopus Gold, an exclusive white-gold alloy known for its brilliant shine and long-lasting effect. As a nod to Ian Fleming’s Jamaican home, the bezel showcases a tribute to the Jamaican flag with green- and yellow-treated natural diamonds in ten different shades. The gem-set piece frames a natural gray silicon dial and includes the same exhibition caseback as the stainless-steel version. Powering the Canopus Gold is the brand’s Co-Axial Master Chronometer Caliber 8807.

To enhance the look of these two commemorative watches, Omega has also designed a collection of sailing bracelets inspired by the NATO strap worn in No Time To Die and cufflinks inspired by Bond’s Omega in Quantum Of Solace.

Both watches are available today, with the stainless-steel version priced at $7,600 and the Canopus Gold priced upon request. For more information, visit Omega’s website or your nearest Omega boutique.