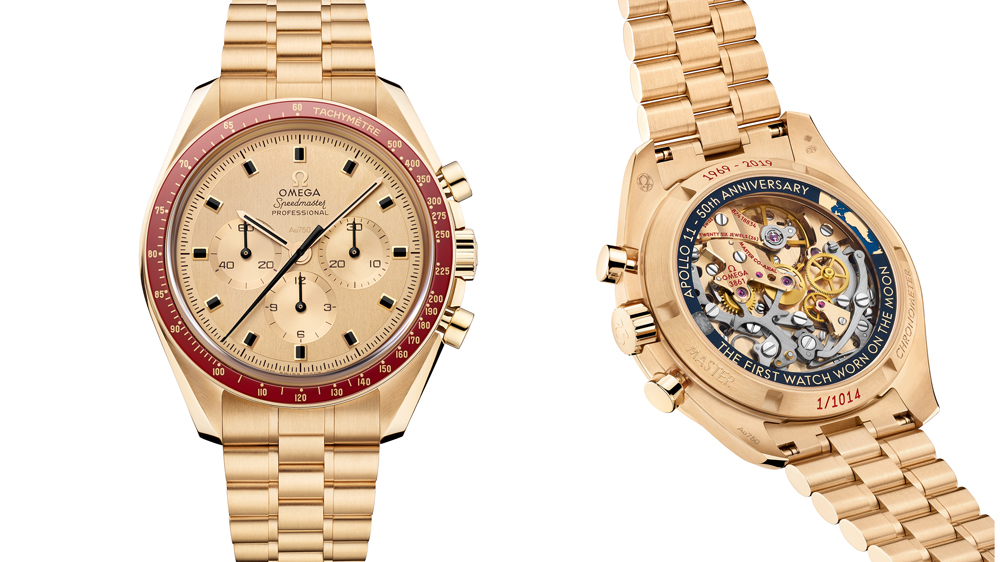 It is a very big year for Omega. Not only is 2019 the watchmaker’s 125th anniversary, but this July will also mark 50 years since its Speedmasters landed on the moon, adorning the wrists of astronauts Neil Armstrong and Buzz Aldrin, and forever claiming a place in the story of one of history’s greatest achievements. That moment—along with more NASA partnerships since—has lifted Omega’s image, propelling the brand’s almost meteoric rise. Sure, many watch brands can lay claim to impressive accomplishments in history (most have existed for well over a century), but only Omega was the first to touch down on another planet.

Omega has no intentions of bringing its Speedmaster back down to earth. The new 50th Anniversary Apollo 11 edition comes in solid 18-karat Moonshine gold. What, pray tell, is Moonshine Gold? The unique trademarked alloy is a paler hue than traditional yellow gold.  Still, that’s a bold move when current trends are swinging heavily towards steel and in precious metals like rose gold. While that may rule out some whose tastes now exclude all versions of yellow gold entirely, history enthusiasts will appreciate this timepiece for its likeness to a 1969 original. Plus, it has serious retro appeal and we’re willing to bet the style pendulum will swing back to yellow gold someday after steel has fully flooded the market.

The original ST.105.012 moon watch was, of course, in steel, but this watch harkens back to watches that were gifted at an “Astronaut Appreciation Dinner” on November 25th, 1969, in Houston to celebrate the moon landing. Those timepieces came in 18-karat yellow gold, and like the new Moonshine gold edition, the Speedmaster BA145.022 had a striking Burgundy tachymeter scale and bezel (this time in Ceragold and ceramic, respectively). Hardcore watch junkies will appreciate the fact that Omega took extra care to follow the first Speedmaster’s design, in the new anniversary edition, with a tachymeter scale that graduated to 500 units per hour and a marker dot above 90, known as the “Dot Over 90” or “DON.” The devil is in the details, folks.

The original BA145.022 housed the caliber 861 and the caseback read, “to mark man’s conquest of space with time, through time, on time.” It marked the first commemorative numbered edition from Omega and only 1,014 models were made from 1969 to 1973. The very first one was created for President Richard Nixon with the second allocated to Vice President Spiro Agnew. They were never worn on Nixon or Agnew’s wrists, however, due to the government’s strict policy against gifting. Models 3 through 28 were given to the NASA astronauts who attended the dinner. Three recipients, Virgil Grissom, Ed White, and Roger Chaffee, who died in a cabin fire in a launch rehearsal aboard Apollo 1, were gifted theirs posthumously. Watches 29 to 32 were offered to Swiss watch industry leaders and politicians but were not numbered. The remaining editions were offered to the public.

If you could get your hands on one of those babies (1 through 28), it would certainly be a collector’s item with bragging rights, but in the meantime, if you act fast, one of the new 50th Anniversary editions could be yours for $30,000. Only 1,014 of the 42 mm numbered timepieces have been produced, each delivered with a five-year warranty. It comes with a sapphire crystal caseback that shows off its Master Chronometer Calibre 3861 manual-winding movement with co-axial escapement, silicon Si14 balance spring, and a Moonshine gold-plated main plate, bridges, and burgundy markings. You’ll be removing this watch a lot, because this is the kind of thing you want to show off. Plus, the movement is encircled by a black matte PVD and laser-treated Moonshine gold ring with the inscription “Apollo 11-50th anniversary” and “The First Watch Worn on the Moon.” A matte-finished blue ocean with a partial world map that includes a glimpse of the lift-off site at Cape Canaveral is visible on the upper right-hand side of the ring. A lunar meteorite inlay is featured on the left of the ring.

So far, reactions across social media platforms have been polarizing, as predicted. The complaints have ranged from the coloring, the metal, disappointment in yet another limited timepiece, or the fact that it was once a gift for Nixon. But there was also approval in the form of fire emojis and adjectives like “dope” and “homerun.” If $30,000 is no big deal and you can get down with yellow gold, then we have to agree with the latter. This moon watch shines bright.