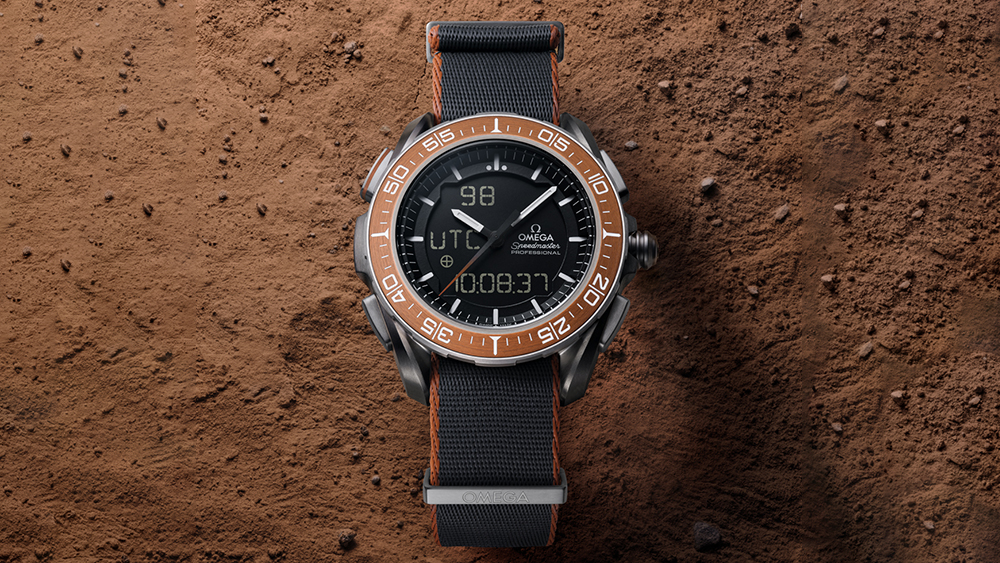 Dubbed the Speedmaster X-33 Marstimer, the latest effort from the Swiss watchmaker, which famously created the first watch ever worn on the moon, is the product of a collaboration with the European Space Agency. It was designed to help researchers studying space, but its suite of tools might catch the eye of those who have a hobbyist’s interest in the Red Planet.

The chronograph is housed in a 45 mm case made of grade-two titanium, and its contrasting black dial features both analog hour, minute and second hands as well as digital displays. Engage the pusher on the left side of the case and the digital display will switch between UTC and MTC, or Coordinated Mars TIme. (The function accounts for the fact that a day on Mars is 39 minutes longer than a day on Earth.) The watch also has a solar compass that will help you find true north on either planet.

The Marstimer also features an aluminum bezel ring dressed in a red hematite color reminiscent of dust on Mars. The shade is also present on the watch’s seconds hand, which features a black to red gradient.

The new Marstimer runs on the watchmaker’s 5622 Calibre, a thermo-compensated quartz movement with special functions that were developed and tested by the ESA. It’s made to seamlessly handle the watch’s digital and analog functions. Additionally, the watch borrows a number of functions from the Speedmaster Skywalker X33, including Mission Elapsed Time, Phase Elapsed Time, alarms and a perpetual calendar.

Flipping the Marstimer over reveals its closed titanium caseback. Omega’s signature Speedmaster word mark and Seahorse logo are embossed on its center, and encircled by the words “Speedmaster X-33 Marstimer, ESA Tested and Qualified.” Both details serve as a testimony to the legitimacy of the duo’s partnership and the integrity of the piece. If you want to switch out its titanium bracelet, the watch comes with a NATO strap and a tool that makes swapping the two a breeze.

“Anyone interested in space, or even science fiction, is obsessed with Mars,” says Omega president and CEO Raynald Aeschlimann in a statement. “To be here on Earth and able to track its movements, gives the term timepiece a whole new meaning. I’m thrilled with this new addition to the famous Speedmaster family.”