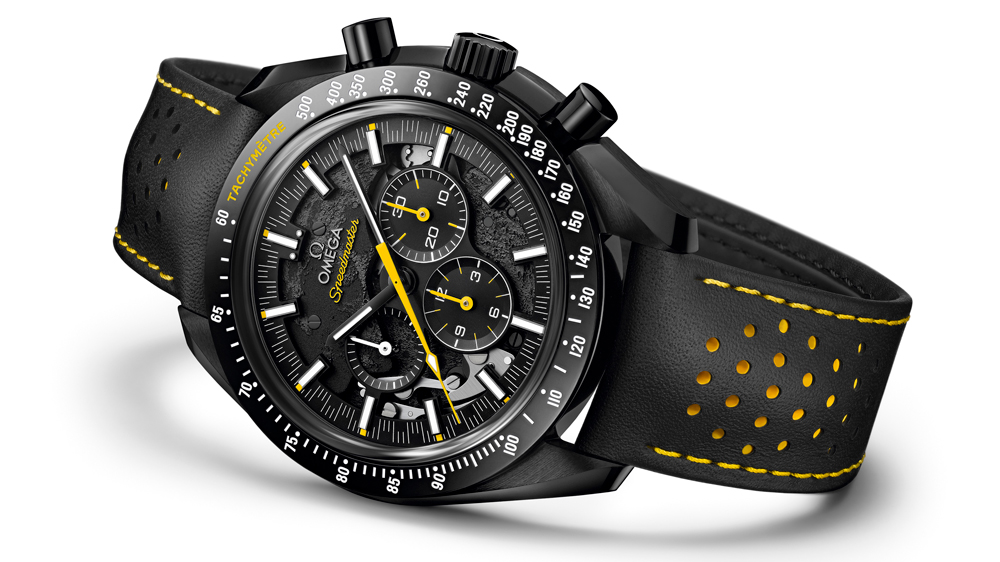 This year marks the 50th anniversary of the Apollo 8 lunar mission, which was the first manned spacecraft to leave Earth’s orbit and circle the Moon on December 21, 1968. To celebrate, Omega created the Apollo 8 Dark Side of the Moon featuring a special treatment on the movement that replicates the Moon’s surface. “We know that Apollo 8 did not land on the Moon but went behind the moon for the first time, which gave us an idea—on the bezel, we did two half spheres in brass, and we copied the moon’s surface,” said Jean-Claude Monachon, vice president and head of product development at Omega. “This is done with a laser ablation and after we put a black coating on it. You can even see the Moon’s Sea of Tranquility.”

The dial of the timepiece has been skeletonized to reveal the inner workings of the movement, which feature the same laser treatment on the bridges and mainplate. The decorative flourish is visible on both sides of the watch—the front side reflects how the Moon’s surface is visible from Earth, while the back side reflects the surface only seen by astronauts in orbit, aka the dark side of the moon.

Omega released its first Dark Side of the Moon timepiece in 2013. At the time, it was a special release as the first all-black, ceramic Speedmaster. Following Apollo 8’s orbit in 1968, a year later, Buzz Aldrin became the first man on the Moon wearing Omega’s Speedmaster. Like Aldrin’s Speedmaster and the 2013 Dark Side of the Moon, the new Apollo 8 timepiece is also a chronograph and features a Super-Luminova tachymeter scale and crown and varnished yellow hands for better visibility against its black silhouette. The straps carry the yellow motif around the wrist through a section of yellow rubber sandwiched between the black strap, revealed through micro perforations. “We’ll see you on the other side,” the words spoken by command module pilot Jim Lovell at the start of the crew’s orbit onboard Apollo 8, is engraved on the caseback.

For those that loved the original Dark Side of the Moon but felt that its 44.25 mm case was too large, the new Apollo 8 is slimmer by 2.5 mm. Omega was able to make the watch thinner by swapping out the automatic movement and getting rid of some of the sapphire crystal. “In the Dark Side of the Moon, we had two boxed sapphire crystals, and here we have only one because you don’t have the rotor,” said Monachon. The new manually wound timepiece features a blackened and decorated version of the 1861 caliber, which is now called the 1869 due to its modifications, the addition of a ruby in the movement, and its tribute to ’69—the year Aldrin landed on the moon.

This timepiece retails for $9,750 and is less expensive than the original Dark Side of the Moon thanks to some modifications like the sapphire boxed crystal—but it ultimately has more value due to the intricate decoration of the movement and dial. The Apollo 8 Dark Side of the Moon will be available later this year and is a reminder of Omega’s creativity in watchmaking and its incredible history in space.