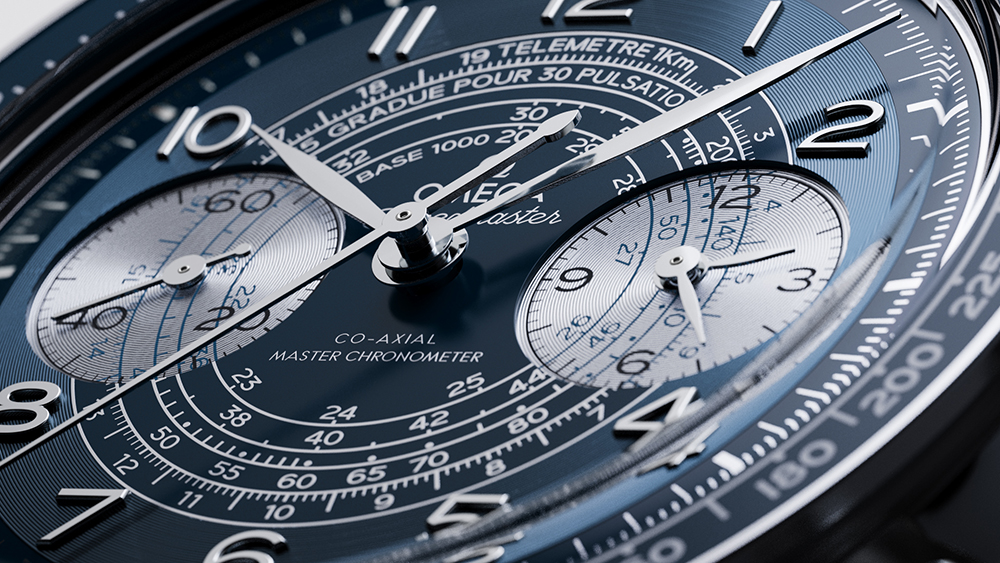 If you’re heading out into bad weather and you want to know how fast you’re going, when the storm will hit and how fast your heart is beating, then the Omega Speedmaster Chronoscope is the watch for you.

This triple scale chronograph is a telemeter, a tachymeter and pulsometer in one, with a spiral inner dial track that extends the ability to measure things. It is overlapped by a conventional chronograph hours counter in a subdial at 3 o’clock and small seconds at 9 o’clock. The multi-function colimaçon (snail-shaped) track on the dial is typical of Omega chronographs from the 1940s.

A closeup of the dial shows the tachymeter, telemeter and pulsometer tracks.  Omega

A tachymeter scale, which measures how fast you’re moving based on how far you have traveled, is a function that normally appears on the bezel or periphery of the dial, where it can time up to one minute. Here, it starts on the bezel, as per convention, but the inner track of the spiral index on the dial lengthens the scale, extending the length of time to be measured. On the outer periphery of the spiral scale is the telemeter, which is used to time how far away you are from an event you can see and hear—such as the difference between seeing lightning and hearing thunder, or seeing the flash of an artillery shell and hearing the explosion. The track just in from the telemeter is the pulsometer, which measures heart rate, graduated for 30 pulsations. For example, if you start the chronograph and run it for thirty pulses and the chrono stops at 60 on the scale, your heart is beating at 60 beats per minute.

The movement performing all of these tricks is the co-axial caliber 9908, a hand-wound version of the automatic caliber 9900. It has a Master Chronometer rating from METAS (the Swiss Federal Institute of Metrology), which means it has an accuracy rating of 0/+5 seconds per day maximum deviation. To improve the watch’s power reserve (it runs to 60 hours), Omega has included twin barrels with anti-wear DLC (diamond-like carbon) coating. The movement is decorated in arabesque (wavy) Geneva stripes, a first for Omega, that start from the balance wheel and fan out to the edge of the backplate.

The new watch is available in four references: three in steel and one in bronze gold.  Omega

There are six models in stainless steel: two with silver dials and blued hands; two with blue dials and rhodium-plated hands; and two with silver dials and “panda style” black subdials, with blackened hands. (They’ll set you back $8,300 on a strap and $8,650 on a bracelet.) They have anodized aluminum bezels in blue or black. There will also be an additional model in Omega’s proprietary bronze gold for $14,100. The alloy is 37.5 percent gold, with some silver to soften the color and some palladium to add strength and corrosion resistance. It has a polished brown ceramic bezel ring with a tachymeter scale in vintage-colored enamel, another design first for Omega. The leaf-shaped hands and Arabic numerals are coated with the same bronze gold case alloy, as is the buckle on the leather strap.  The case measures 43mm x 12.8mm.