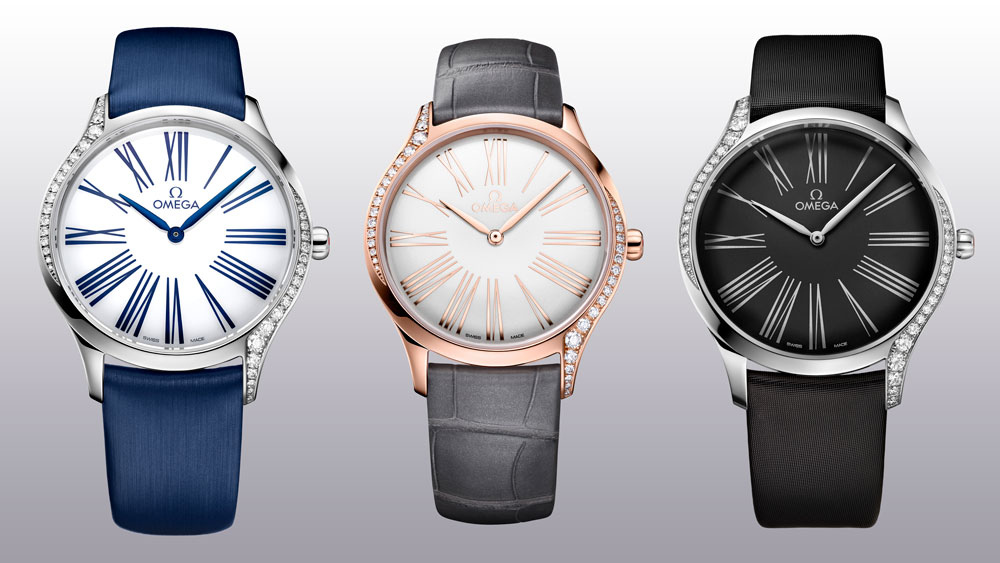 Omega’s new Trésor watch has been the best-selling item at its first-ever women’s pop-up boutique, Her Time, which sits next door to the Swiss watchmaker’s New York City flagship on Fifth Avenue. “Women’s watches have always allowed Omega to be so creative and luxurious with design, but many people don’t realize that this commitment to women goes back over 100 years,” said Raynald Aeschlimann, president and CEO of Omega. “So we really wanted to strengthen that message and give our women’s watches the visible platform they deserve.” The new Trésor features a design and price point that has been drawing in a younger customer looking for a versatile Swiss-made timepiece with style.

The new watch features a caliber 4061 quartz movement in either a slim case with diamond-accented bezels in stainless steel ($4,500–$5,600) or in Omega’s proprietary 18-karat Sedna gold ($8,600) with fabric or leather straps. Nine different models are available in six different dials, ranging from taupe brown and mother of pearl to opaline silver and black. According to Omega’s boutique manager, the 36 mm navy-blue model with matching alligator strap ($4,500) is the Trésor that’s flying off the shelves. But every piece—with their graphic, oversized Roman numerals and sleek appearance—offers an elegant day-to-night option that fits comfortably on the wrist.

First introduced by Omega in 1949, the Trésor was originally a men’s watch with a 30 mm caliber known for its precision and reliability, while the De Ville collection, introduced in 1960, was a direct descendant of Omega’s iconic Seamaster. The original Trésor had a thin golden case, which has been carried over into the new De Ville Trésor for women. This new version features a sizeable case with a noticeable thinness of 8.85 mm for the 36 mm watch and 9.75 mm for the 39 mm one. Subtle details like a red liquid ceramic flower with a diamond decorate the crown, and thoughtful novelty touches like a mirrored caseback were added without exaggerating the feminine message.

However, in its new boutique, Omega has gone above and beyond to target its female clientele. With serene off-white and gold decor, the storefront highlights its latest women’s pieces in stylish glass vitrines lining the walls, while an exhibition within the store offers a unique view into Omega’s history of women’s watchmaking. On display are rare Omegas, like its early “secret” jewelry watches—timepieces with hidden dials created during the eras when it was considered rude for a woman to check the time—to some of its best Art Deco timepieces and vintage advertising.

The first Her Time exhibition opened in Milan in 2015, but this is the first time the brand has opened a dedicated boutique to its women’s timepieces, allowing Omega to present its historical watches alongside its current collection in a retail setting. The boutique at 711 Fifth Avenue will be open through the end of March.