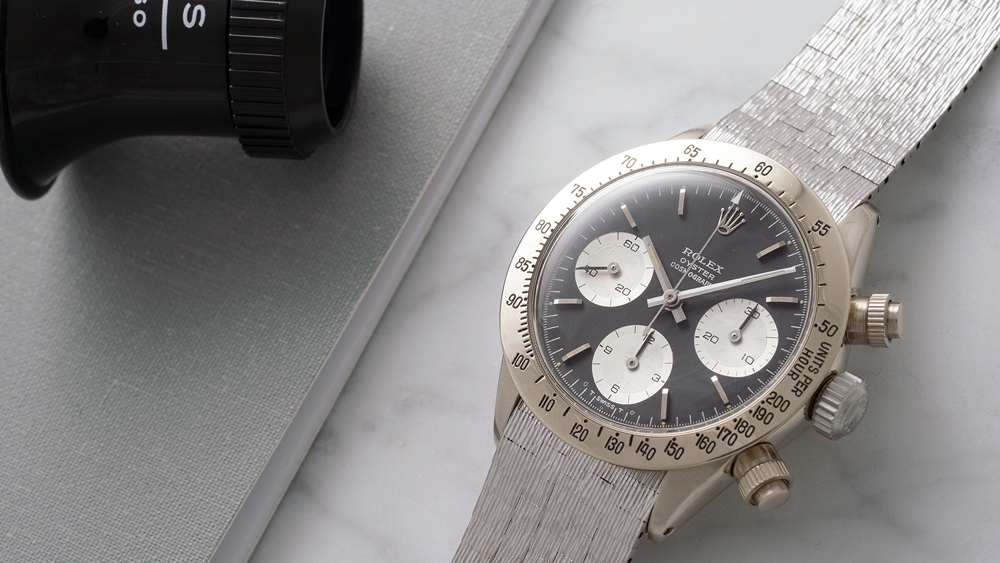 Phillips, in association with Bacs & Russo, has another extremely rare Rolex Daytona on its hands. Last year, its sale of Paul Newman’s Rolex Daytona for $17.7 million was a record-breaking achievement for the auction house. Now, it has unveiled a white-gold Rolex Cosmograph Daytona, thought to be the only one of its kind in the world. Rolex has typically only produced manually wound Daytonas in stainless steel or 18-karat yellow gold, with select 14-karat yellow-gold pieces for the American market. This unique white-gold reference 6265 Rolex was made by special order in Germany in 1970 and delivered to the client in 1971.

It remained private to the owner until just a decade ago, when it became known to watch insiders. The owner, John Goldberger, swore never to sell the piece. Goldberger is known in the watch world as a true “mega-collector” and has written books such as 100 Superlative Rolex Watches among other tomes on Patek Philippe, Omega, and Longines. His collection of timepieces is expansive and carefully curated. One of his Rolex timepieces, the reference 4113 split-seconds chronograph (the largest ever made by the watchmaker and the only rattrapante), is just one of 12 and is considered one of the pinnacles in Rolex collecting. A less enviable 4113 than Goldberger’s sold at Christie’s for $1.16 million in 2013.

Golberger decided to part with his covetable Daytona this year, and proceeds will benefit the nonprofit charity Children Action, a U.K.-based foundation that has been committed to aiding neglected children and adolescents and their families throughout the U.K. for the last 149 years.

The white-gold Cosmograph Daytona, which Phillips has dubbed “The Unicorn” for its rarity, has a starting estimate of upward of 3 million CHF (approximately $3.18 million at current exchange) and will be available in May as part of Phillips’ Daytona Ultimatum auction on May 12.