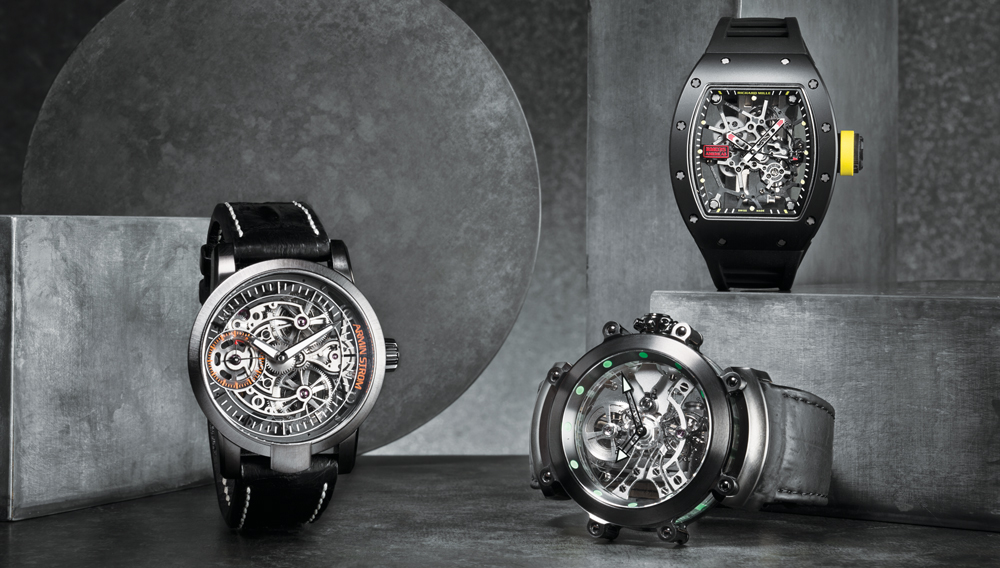 “Today, if you produce something mechanically interesting, you put it on the dial side,” observes Sébastien Chaulmontet, head of movement development at Arnold & Son. “People want to buy visible mechanics. It’s the modern taste.”

Like so many other present-day watchmaking trends, the practice of creating openwork watches—timepieces in which the movement becomes the face of the watch thanks to a partially or completely removed dial—is rooted in horological history. During watchmaking’s Enlightenment-era heyday, materials such as rock crystal (most famously used by Abraham-Louis Breguet in the complicated watch he created for Marie Antoinette) often provided views of timepieces’ mechanical inner workings. Then as now, the mechanism driving the device captured people’s imaginations and, naturally, demanded to be seen.

Current openwork designs share many characteristics with skeleton watches, and indeed, many companies make no distinction between the two. Originating in the 1920s and ’30s, skeletonization has evolved into a highly specialized art form, in which noncritical pieces of the movement are typically reduced in profile to an absolute minimum and then engraved. But whereas traditional skeleton watches can appear delicate and frilly, modern openwork models have embraced bolder, more technically inspired looks.

One crucial step in the emergence of the contemporary openwork watch was the founding of Richard Mille at the turn of the millennium. The brand’s eponymous owner (see “The Robb Reader: Richard Mille”) has an abiding passion for racecars that spurred two key developments: a movement specially built to echo automotive aesthetics and a case designed to display it. “I always found that it was a pity not to express the beauty of an awesome mechanism,” Mille says. “Having a case that curved in all directions—wide open to show the movement, but also tapering from thick in the middle to lower at the edges—brought another aspect into the formula: With the thicker middle section, I had even more space to work in for the movement layout.”

Richard Mille’s designs—as well as the designs of other overtly mechanical watches, such as Ulysse Nardin’s Freak—garnered sufficient attention to cause a stir in Switzerland’s technical offices. Even relatively staid companies began experimenting with modern styling and ways to highlight the mechanics of their movements. In 2003, at Zenith, the venerable Swiss chronograph manufacturer, the then CEO Thierry Nataf—who previously served as the company’s creative director—fitted the brand’s flagship El Primero chronograph with an aperture revealing its high-frequency escapement. The brand’s open models have since remained a central and successful part of its offerings.

Thanks in part to its relationship with the specialty movement maker Renaud & Papi, the firm that built  Mille’s first movements, Audemars Piguet brought an artistic touch to the openwork watch with a special series of Millenary examples that mixed off-center dials with intriguing component shapes and finishes. Eventually, these same elements appeared in the company’s standard Millenaries (including a women’s version released this year), which successfully demonstrate the versatility of the openwork format and its potential for pushing aesthetic boundaries.

The openwork genre’s influence on the venerable art of skeleton watches provides one measure of its pervasive appeal. Cartier was the first company to break away from the traditional skeleton-watch formula, with a 2004 Louis Cartier model from the Privée collection. By dispensing with the customary delicate engraving, the designers were free to incorporate the modern, technical elements associated with the skeleton’s openwork brethren.

The line between openwork and skeleton watches continues to blur today. Though the plates and the bridges of openwork watches are still cut away, unlike those of skeletons, their purpose is not to serve as decoration in themselves but to display the cleanly finished components that lie beneath. The same principle informs the design of a relatively recent hybrid: the Bell & Ross BR-X1 Carbone Forgé, which features a sapphire dial and rhodium-treated metal bridges that provide structural support while revealing the piece’s impeccably engineered heart. “You can see the quality of the movement, the quality of the finish, and a three-dimensional quality,” says Bruno Belamich, the designer of the X1. “This is the direction we want to go.”