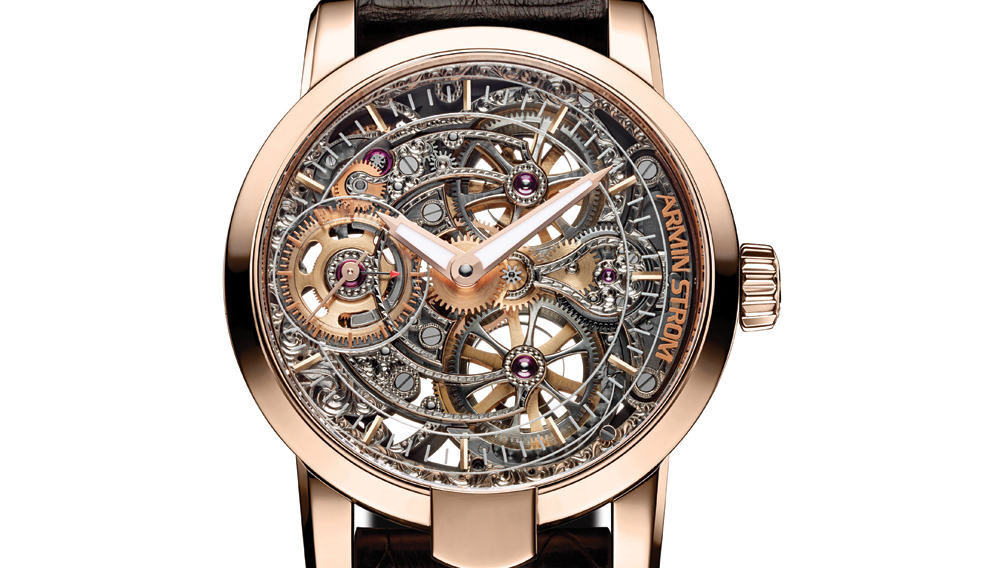 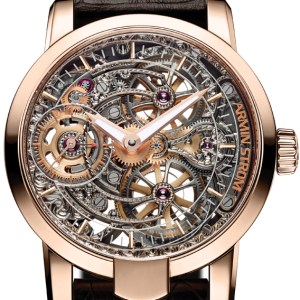 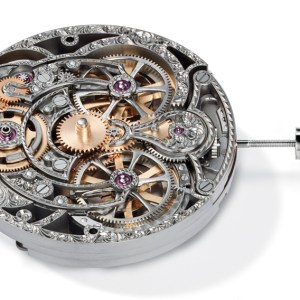 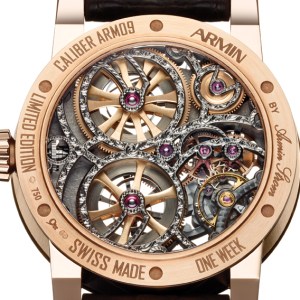 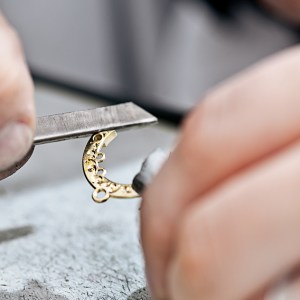 The tradition behind skeleton watches does not mean they have to be made by hand,” says Claude Greis­ler, director and chief horologist at Armin Strom. “Making skeleton watches is the tradition.” Greisler is the most recent link in a chain of skilled talent that dates back to company founder Armin Strom, who built a reputation for himself hand-sawing, filing, and refining skeleton watches in the 1960s and ’70s. But unlike Strom, now retired, Greisler is taking the art of skeleton watches into new territory, applying the CNC milling technology that is used to make most modern components to the 150-year-old specialty craft. Armin Strom’s ARM09-S movement is the first caliber purpose-built from the design stage and milled specifically for skeletonization in order to allow a greater degree of precision in hand-finishing than would be possible with older techniques.

“This is a step forward in the history of skeletonizing because this is a concept skeleton watch,” claims Greisler. Traditionally, a watch is skeletonized by hand-sawing as much material as possible away from the components before rendering them unstable, and then decorating every surface. For the One Week Skeleton, all the components were designed by CAD, with tolerances calculated in advance, and then milled in “cut out” form, ready for decorating. Even the beveling angle is factored in at the CNC stage.

This is all easier said than done. “We know which tolerances will work because of our years of experience in skeletonization, and because we made several prototypes,” says Greisler. “I was trained by Armin Strom himself when I joined the team, and he passed on the knowledge to me. But we still had to test everything. There was a lot of engineering behind these bridges.”

The process—in effect, cutting out the cutting-out phase—creates the false im-pression that the job of skeletonizing the timepiece has been drastically reduced. In fact, the time necessary to complete the One Week Skeleton is comparable to that of the conventional process. According to Greisler, the ultimate purpose of his method is to create more surfaces that can be decorated by hand, and ironically, only automation makes this possible. “The CNC machines can go where no hand saw can go, so we can engrave and finish to an extent never before done,” he says. “It’s much more precise, much more extreme. All the small openings in the mainplate, for example, you could never do with a saw. The wire of the CNC machine is 0.07 mm. The thinnest saw we have for skeletonized work is 0.2 mm.”

As in all skeleton watches, the dial consists of a mere ring surrounding sapphire crystal, allowing a full view of the movement and the open dual winding barrels that visibly tighten as you wind the watch. But the One Week Skeleton is not designed to be entirely transparent. “With most skeleton watches, the idea is to cut out as much as possible in order to see right through the watch, but some collectors don’t like this because you see your wrist, including the hair,” says Greis­ler. “The concept of this watch was always to have it as skeletonized as possible, but not transparent. Instead, it is multilayered, with each layer skeletonized and then arranged in such a way that you cannot see through to the back. We want the viewer to be able to dive into the movement and appreciate that three-dimensionality.”