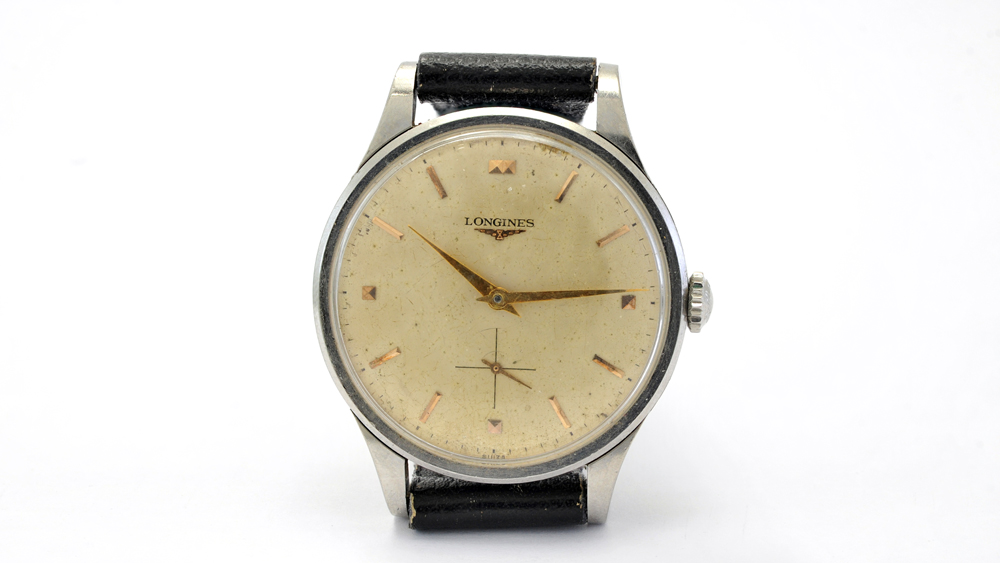 Time was not on the side of the six million jews that perished at the hands of the Nazis during WWII, but on Oskar Schindler’s watch almost 1,200 were saved from persecution. The German industrialist’s story was the basis for Steven Spielberg’s Oscar-winning 1993 film, Schindler’s List. On his wrist during those precarious years, in which he risked his life for others, Schindler wore a Longines timepiece that is now up for sale at RR Auction in Boston.

The ’40s-era watch bears the wear and tear of the era and it appears to be, in no way, restored. And that’s a good thing—for serious collectors, restoration can be damaging to the watch—and particularly for a watch of this provenance, the marks of its history have heightened meaning. The time-only watch features a steel case, with a faded and yellowed white dial and rose gold hour markers and hands. A small sub-seconds dial sits at 6 o’clock, marked by two thin black crossing lines. The 12.682 Caliber movement is visible through the caseback.

Included in the auction of the watch are some of Oskar Schindler’s other personal possessions: a 1938 Sudetenland Medal (an award given to all German officials and members of the Wehrmacht and SS who marched into Sudetenland), a compass manufactured by Beard/Gotthilf Lufft said to have been used by Schindler and his wife to flee Germany for American-occupied territory in 1945, two fountain pens in a hinged Parker case that was last owned by Schindler’s wife’s biographer Erika Rosenberg, and a business card belonging to Schindler from 1957. Included with the sale of the watch as a single lot, all of the items come from the estate of Emilie Schindler, his wife who survived him by 27 years until she passed away at the age of 94 in 2001.

There are currently only six bids for the timepiece at a top bid of $4,028. Bidding will end on March 6th.

RR Auction is known for selling rare documents, manuscripts, and historic artifacts. One of its record-setting watch sales was Dave Scott’s Apollo 15 Lunar Surface Chronograph watch, which sold for $1.625 million. Other top sales have included a pair of Bonnie and Clyde’s guns for over $500,000 and President Kennedy’s reporter diary from 1945 for $718,750.