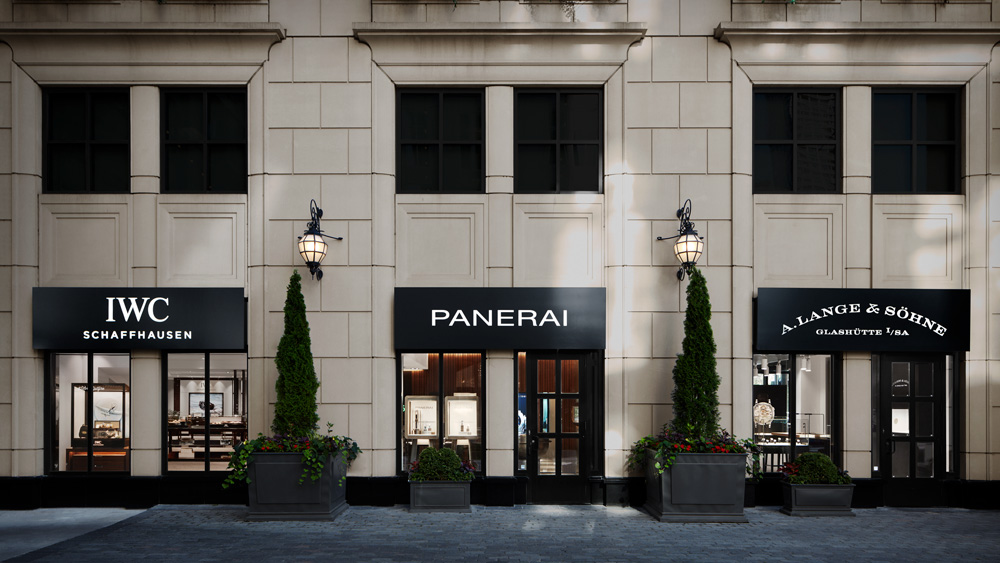 With nearly 2.7 million people, Chicago is the third-most populous city in the United States. Yet compared to metropolitan areas on the East and West coasts—in New York, Florida and California—it’s notably lacking in big brand watch boutiques.

Until now. Three Richemont-owned brands—IWC Schaffhausen, Panerai and A. Lange & Söhne—just announced the opening of adjacent boutiques in the Windy City’s historic Gold Coast neighborhood. Located at 11 East Walton Street, at the Waldorf Astoria hotel, the boutiques are operated by Burdeen’s Jewelry, a fixture on the Chicago luxury retail scene since 1980.

Beloved by locals and visitors alike, Chicago reportedly attracts some 35 million tourists a year. Gold Coast, the affluent district that borders Lake Michigan, just north of downtown, is one of the city’s biggest draws, not least for its shopping. North Michigan Avenue boasts some 900 stores packed into an eight-block stretch known as The Magnificent Mile. And it is here that the three new boutiques are located.

For A. Lange & Söhne, the boutique is its fifth in the U.S., after openings in New York, Miami, Palm Beach and Costa Mesa. “A boutique in Chicago has been at the top of our wish list for quite some time,” says A. Lange & Söhne brand president Rodolfo Chavez. “We are delighted that, together with our dedicated partner Burdeen’s, we can now offer the community of watch aficionados in the area a gathering place, where they can enjoy a comprehensive collection of our watches in a harmonious setting.” The Chicago location marks the German watchmaker’s first North American store featuring a new interior design concept, which relies on carefully crafted details to evoke the elaborate movements in its timepieces, such as glass cabinets with both angled and polished edges. Accents of natural stone throughout the store allude to the Ore Mountains in Glashütte, Germany, where Lange is based.

Fans of IWC will feel right at home in its Chicago boutique, its ninth in the U.S., thanks to design details—soft beige tones and dark wood accents, for example—that echo the brand’s elegant aesthetic.

Meanwhile, Panerai’s 180 square-foot boutique, its 15th in the U.S. and 85th worldwide. “Panerai expanding into Chicago was a natural fit given our long involvement with the city and strong local collector base,” says Panerai’s U.S. brand president Philippe Bonay. “Our central location at the Waldorf Astoria, in the heart of the city, will allow us to provide fans with a more accessible connection to the brand and community they love.”  It is the first one to be designed by the brand’s new creative director, Alvaro Magini, whose approach draws a clear line to the Florentine watchmaker’s heritage as a supplier to the Italian navy through the use of materials such as polished Calacatta marble from Tuscany, burnished brass, bronze, durmast oak and special reeded glass.