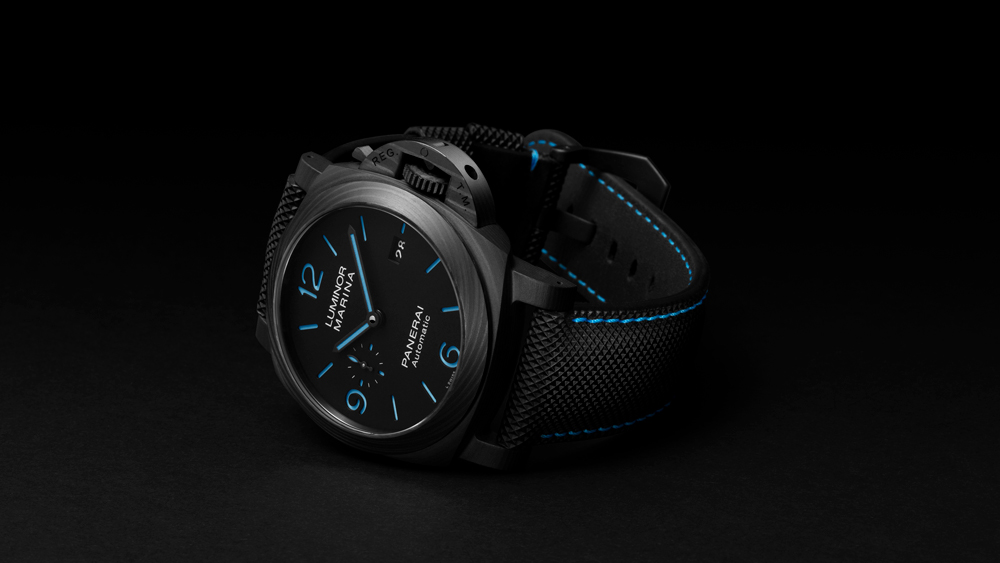 Panerai is reinforcing its position as the world’s foremost maker of tough-guy timepieces by expanding its offerings in Carbotech, a strong-but-light carbon material that the brand developed in-house. Carbotech has a few properties that make it ideal for large sports (or combat) watches. First, it feels like a feather on the wrist, because it is lighter than titanium, so it doesn’t hinder movement. Secondly, it is tougher than steel and completely scratch resistant. It is also highly shock resistant because it is constructed in bonded layers that give it inherent properties of resilience. It is formed using very thin sheets of carbon fiber that are compressed together using a polymer known as PEEK (Polyether Ether Ketone). This, combined with an Incabloc anti-shock device makes the Panerai Carbotech-cased watch one of the most shock-resistant sports watches out there.

As a bonus, Carbotech also looks good. It is composed of layers, which means it has a slight matrix running through it that makes each watch unique. The color is a combination of black and gray, with a matte, rather than a shiny surface. On the PAM 1661, the case, bezel and crown protector are made of Carbotech, while the caseback is DLC-coated titanium. The signature sandwich dial includes numerals and markers on the lower layer that are coated in blue Super-LumiNova, which will glow green in the dark, for high legibility underwater. Last year, two Carbotech-encased watches were introduced in the Submersible collection: the 47 mm PAM 1616 and the 42 mm PAM 0960. Back in 2015, Panerai introduced a 44 mm Luminor with a Carbotech case, but the markings were beige and the dial now constitutes an older design, with thicker hands and large dots rather than markers. All Carbotech models contain the same elite in-house movement, the automatic caliber P.9010, with a Glucydur balance, a hacking seconds and two spring barrels for a three-day power reserve (72 hours).

The PAM 1661 is water-resistant to 300 meters. The strap is Sportech nylon with black with blue stitching, and it comes with a second strap in black rubber that will fit over a wetsuit. It is priced at $12,800.