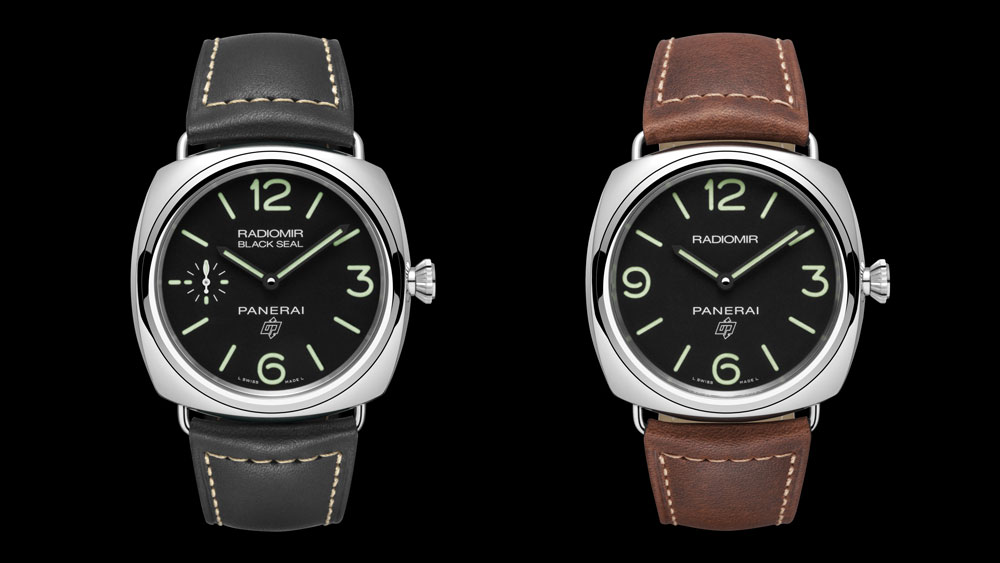 This year, Panerai has been focusing on its historic models. Earlier this summer, the watchmaker released new Panerai Luminor Logo timepieces that are exclusively available in the United States. The Luminor, which was created in 1949, used a self-luminous substance that replaced the patented radium-based powder Radiomir that the watchmaker had been using to illuminate its timepieces for the Royal Italian Navy. Both the Luminor and Radiomir have become flagship models since the brand ventured into commercial watchmaking in the ‘90s. Now the brand has released two new Radiomir models, the Radimoir Logo and the Radiomir Black Seal Logo, which has a small seconds counter at 9 o’clock.

Panerai first filed for a patent for its historic Radiomir material in 1916 but didn’t create a prototype for a Radiomir timepiece until 1936 on the eve of WWII. Ten prototypes were produced for the frogmen of the First Submarine Group Command of the Royal Italian Navy. The Radiomir substance allowed for high visibility and had excellent adhesive qualities under water, allowing for the timepieces to be worn over the frogmen’s diving suits. Actual production wouldn’t take place until 1938. Although it was ultimately superseded by the self-luminous Luminor 11 years later, it was used to create watches briefly for the Egyptian navy in 1956. In a tribute to the original Radiomir, Panerai released two special edition Radiomir 1940 models in 2012 that revived the original Royal Italian Navy design from the era.

The two new Radiomir timepieces released this year house Panerai’s latest in-house P.6000 caliber, a hand-wound movement with a power reserve of three days. Both the PAM 00753 Radiomir Logo and the PAM00754 Black Seal Logo are otherwise very simple reissues that feature an in-house caliber instead of the externally sourced calibers that were used in older models. The 45 mm timepieces, low on frills and built for function, come in stainless steel with a natural leather strap (light brown for the PAM00753 and dark brown for the PAM00754).