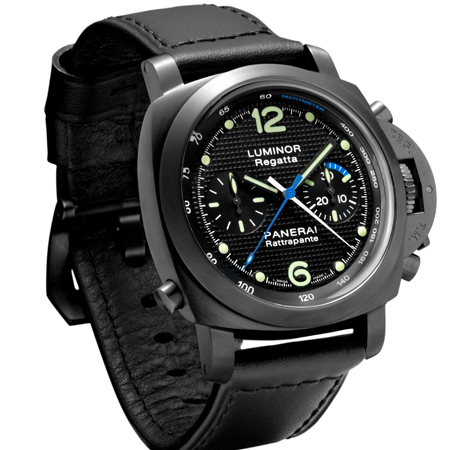 Each April, yachting enthusiasts gather for the Antigua Classic Yacht Regatta, a pageant that rewards not only speed but style. With the annual introduction of a limited-edition Regatta watch, event sponsor Panerai merges performance and design like the vintage vessels that sail in its Panerai Classic Yachts Challenge events held in the Caribbean, Mediterranean, and Atlantic from June through September. Limited to 500 pieces, this year’s Luminor 1950 Regatta Rattrapante ($17,000) marks an aesthetic departure from its predecessors with a matte black DLC (Diamond-Like-Carbon) coating, which makes the metal more resistant to corrosion and scratching. The rattrapante, or split-second, chronograph with double-column wheel construction (a hallmark of high quality) allows you to time two events that start at the same time with two hands that can be stopped independently. For hardcore sailors, the watch’s regatta function also counts down the five minutes before the start of a race—a feature that will come in handy for avid sailor and CEO Angelo Bonati, who, plans next year to sail on the brand’s newly restored Eilean, a 22-meter classic yacht that launched in 1937 and starred in Duran Duran’s 1982 “Rio” video. (www.panerai.com)