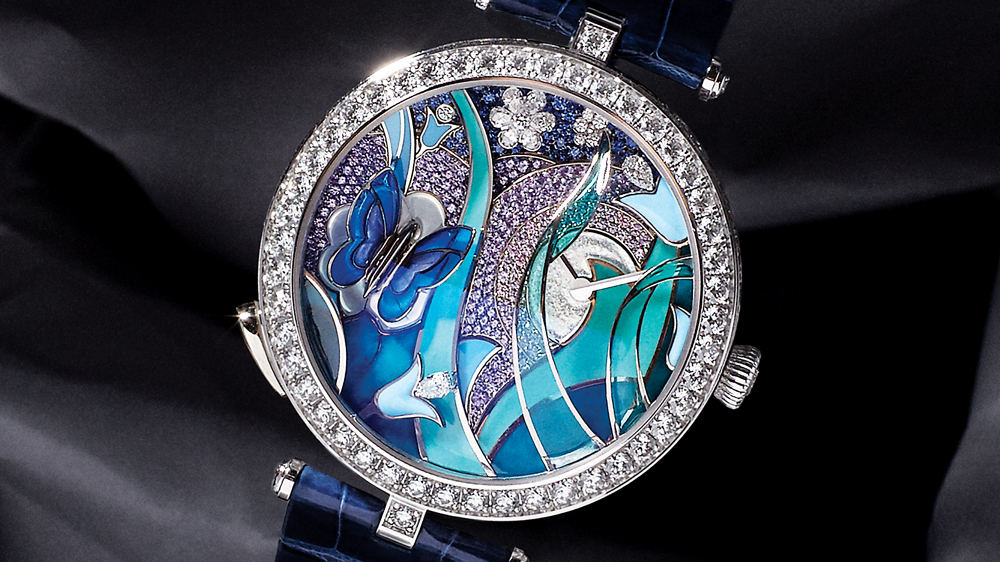 The notion that every seemingly new development in watchmaking has already been tried in the past is a popular, if rather jaded, view held within the watch industry. However, Van Cleef & Arpels’s latest complicated watch, the Papillon Automate, has a truly original function: the ability to adjust its level of activity to that of the wearer. A butterfly automaton on the dial, rendered in gold and plique-à-jour enamel, gently flaps its wings on command or seemingly at random. The higher the state of wind—and the more active the self-winding rotor becomes—the more frequently the butterfly will spring to life.

This prime example of horological innovation is driven by a clever system that uses an irregular 19-toothed trigger wheel attached to the winding system to produce the apparently random flutter of the butterfly wings. A cam rotating on one of the barrels detects the current wind level and, as the barrel stores more energy, increases the movements of the butterfly. Both the system and the fabulously crafted dial (decorated with diamonds and four kinds of enameling, including curved plique-à-jour) are made all the more impressive by the fact that they were developed largely in-house.

The most significant breakthrough resulting from the mechanics is that the Papillon Automate manages to connect itself with the personality of the wearer—an important achievement for any kind of watch. It is certainly the most advanced and successful example of the company’s “poetic complications,” its preferred nomenclature for its offbeat, artistic style of watchmaking. As the finished timepiece so artfully illustrates, it was only by throwing out the rule book—and the baggage—of Swiss watchmaking history that Van Cleef & Arpels was able to develop something truly new. 877.826.2533 (vancleefarpels​.com, $290,000)