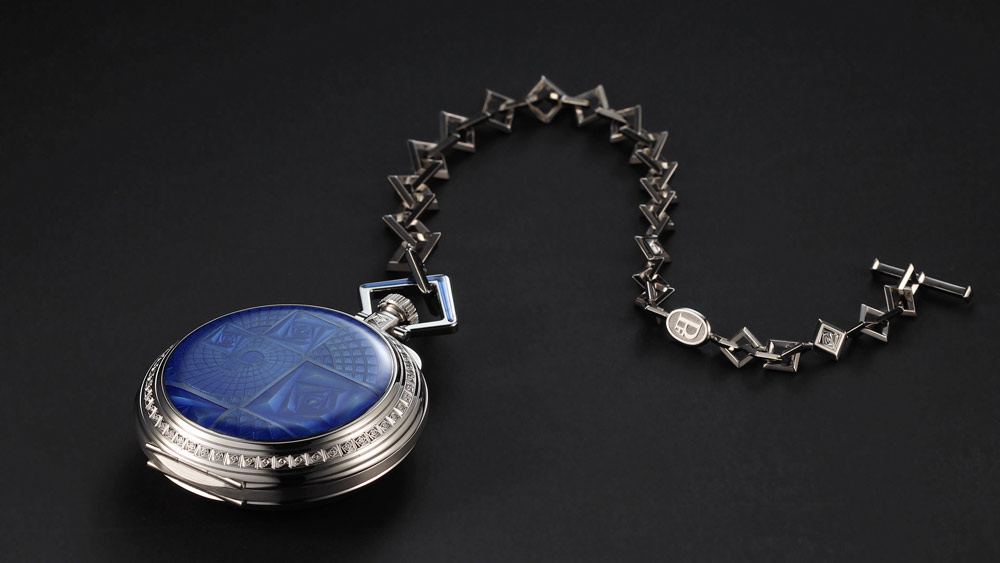 (Before founding his namesake brand, Parmigiani was, and still is, known for bringing life back to some of watchmaking’s most important historical pieces, mainly for the Sandoz Foundation’s important collection, but also for museums.) The release also coincides with Parmigiani’s 71st birthday with an embargo timed to his exact day and time of birth (December 2, 1950 at 7:08 a.m. in Couvet, Switzerland). Fans of astrology will know that makes him a Sagittarius—a sign known for qualities like independence, fair-mindedness, honesty and an intellectual mind. As one of the most revered independent living watchmakers and restorers of his time, he certainly fits the bill.

To celebrate his stellar career, Parmigiani’s newly minted CEO Guido Terreni, who took over the helm of the company’s business operations in January of this year, asked Parmigiani to “create something that summarizes your life,” Terrini told Robb Report. “[Michel] said, ‘Well, I have something that might be interesting. It’s a movement that I found. It’s a grand sonnerie from the end of the 1890s.'” I said, ‘Wow, well that’s a good start.'”

Parmigiani found the movement in an antique shop in the ’90s. Designed by Louis-Elisée Piguet, who is said to have made the first perpetual calendar module for a pocket watch, the raw caliber number 5802 was made sometime between 1898 and 1903. Parmigiani snapped it up after recognizing Piguet’s work and appreciating it as an important expression of watchmaking during that time. Since then, it has remained untouched in Parmigiani’s possession. It’s a grande sonnerie minute repeater with two hammers that has been carefully restored, and newly set in a 64 mm 18-karat white-gold case (when Parmigiani purchased the movement it was uncased) and topped off with a black onyx dial on the interior (with the engraved movement visible on the opposite side) and case covers made of three to four layers of blue grand feu enamel that has been hand-engraved.

“It was in very nice condition but, of course, it needed to be restored,” said Terreni. “Michel said, ‘We cannot replicate the Côtes de Genève [finishing] because if we do that we’re taking out the material and it will not be functional anymore. So we have to redo the bridges and the platine.’ It’s one thing to redo the parts for function but it’s another thing to change the chassis of the movement. So instead, we decided to engrave it.” It took no less than 10 of the best craftsmen in Switzerland, enlisted both within and outside of Parmigiani, to create the final piece. “These people are the best of the best at what they do,” said Terreni.

He added that he was particularly moved by enameler, Vanessa Lecci, who worked on the grand feu covers. Terreni met with her first to see the final results of her work, about half an hour before Michel Parmigiani arrived to inspect the craftsmanship. “She was very anxious when she came,” said Terreni. “She worked on the first cover which has a depth of engraving that is abnormal because the dimension of the piece [60 mm vs. 30 mm typical of a wristwatch] allowed her to work at a scale that was unconventional.” This is a particularly nail-biting challenge when working with grand feu enamel, which is notoriously difficult. Terreni noted that she had to get it right in just one shot…and then replicate it on the other side.

He said it took him an hour to understand the magnitude of what she had achieved but when Parmigiani arrived he exclaimed, “It’s magnificent!” It was the culmination of a lifetime of Lecci honing her craft. “You put your lifetime talent into one object and then it’s able to become your child,” said Terreni. “That, to me, is part of the beauty of luxury because luxury should be moving you towards excellence and pushing your boundaries.”

The engraver, Eddy Jacquet, who also recently worked on pieces for MB&F, was up against a monumental challenge working not only on the case, but also on the décor of the singular movement. One misstep and the unique piece could be ruined. “He completely underestimated the time,” said Terreni. The designs were first worked out on trial pieces and the movement was finished in July, just before Jacquet was set to go on vacation. But it was the covers that took the longest, about three times what he had estimated, according to Terreni. With a hard deadline set for September, in order for the pocket watch to be ready in timing with Parmigiani’s birthday, it was no small feat. “The covers arrived just two days before,” says Terreni.

His expertise is evident in the hand-engraved square roses set in a pattern that follows the Golden Spiral (one of Parmigiani’s favorite themes), which is a derivative of the Golden Ratio, a mathematical formula seen everywhere in nature. The geometrically shaped flowers follow a spiral meant to evoke the effect of a ripple on water. The engraving, on Lecci’s profound and dimensional blue grand feu is contrasted by a clean onyx dial on the interior with just the hour and minute hands, subtle index markers, and sub-seconds dial at 6 o’clock with the exceptional movement visible on the other side. “It’s a stone that is very difficult to cut because when you slice the Onyx, it has natural imperfections and inclusions, so there was only one slice of onyx of that dimension that was perfect,” said Terreni. “It’s like looking at a natural Vanta black. It has a darkness that is so deep, it’s like a hole. Your eyes are lost in it.” Not skipping any detail, even the interior of the case covers were considered with a mirrored-finish to offer another view of the movement and dial and the chain, made by Laurent Joilliet, said to be Switzerland’s last traditional chain maker, mimics the squares of the roses in an unconventional but striking presentation.

“We agreed that it had to be a pocket watch that was going to convey a masculine contemporary mood,” said Terreni. “It’s not a re-edition of a piece from the past. Usually, when you look at pieces from the end of the 19th-century, they are very Baroque with these finishings that are in the Breguet style. I said, ‘I don’t think anyone needs a re-edition from the past. If you want to do something that celebrates your craft, let’s do something that expresses a feeling that is contemporary on an object that is historic.”

For those in the know, with an appreciation and knowledge of this exceptional watchmaker, this will be a must-have piece for a collection. The signed pocket watch is priced upon request, of course, but you can imagine, with this level of craftsmanship on a one-of-a-kind piece with historical provenance, it will be reserved for one very deep pocket.