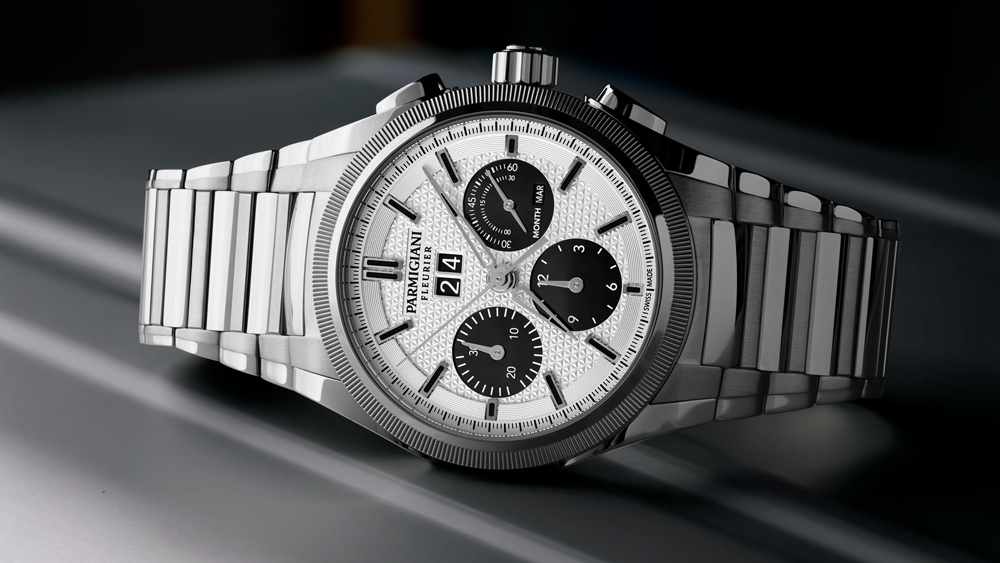 The Tondagraph GT Steel was launched last year to fill a gap in Parmigiani’s luxury Tonda line with a sporty, daily-wear model and jumping into the competitive field of luxury steel sports watches. Parmigiani describes it as “a value proposition relative to the larger Parmigiani Fleurier collection.” The debut model was monochrome black, with subdials blending into the background despite a contrasting finish. This year’s black-on-white panda configuration adds contrast and legibility, elevating the GT to true sports-watch functionality. There are two versions, one in stainless steel with the same chronograph/annual calendar PF043 movement that debuted in the model, and an 18-karat rose gold model, The Tondagraph GT Rose Gold Silver Black with the brand’s award-winning in-house chronograph caliber PF071.

The case, like all Parmigiani cases, is made according to the golden ratio of 1.618, considered to be the ultimate harmonious proportion. It also has the same coin-edge bezel that is signature to Parmigiani, along with the distinctive clou triangulaire guilloché finish and Delta-shaped hands. The GT is thus more authentically a “dress” sports watch than most. It is more like a luxury watch that has changed into its hiking clothes and eaten an energy bar, but it still qualifies for boardroom wear.

The movement in the 42 mm steel model is the in-house caliber PF043, introduced last year, with its rare horological pairing of a chronograph with an annual calendar. It has a 45-hour power reserve and a 22-karat gold rotor. There are subdials at 9 and 6 o’clock for the chronograph readouts. The 3 o’clock subdial serves two functions: a running seconds indicator with a unique short/long-hand on concentric tracks; and a month display spelled out in an abbreviated format. A big date appears prominently in a large double aperture at 12 o’clock. The rhodium-plated indexes are treated with black luminescent coating. Teardrop-shaped lugs were applied to the GT for increased ergonomics, along with an integrated bracelet in the same material and finish as the case. It is water-resistant to 100 meters and priced at $20,400 on a strap and  $21,500 on a steel bracelet.

The 18-karat gold version, the Tondagraph GT Rose Gold Silver Black, contains the in-house caliber PF071, a COSC chronometer-certified movement based on Parmigiani’s 2017 GPHG-award-winning caliber PF361. It’s a high-frequency movement—still a rare feature among sports watches—with a 36,000 vph oscillation speed, meaning the chronograph can measure intervals up to 1/10th of a second, all while maintaining a 65-hour power reserve. It uses a column wheel rather than a cam, for smoother operation, and a vertical clutch rather than a horizontal one, which increases accuracy by enabling the chronograph to start without an initial jolt. The PF071 does not have an annual calendar function, but it does have an integrated big date, also in a double aperture at 12 o’clock. As with any elite movement, it is decorated, with hand chamfering and polishing, sandblasted surfaces, a sunray pattern on the 22-karat gold rotor and hand-finished bridges. It is priced at $45,300 on a strap and $72,500 on a solid gold bracelet.