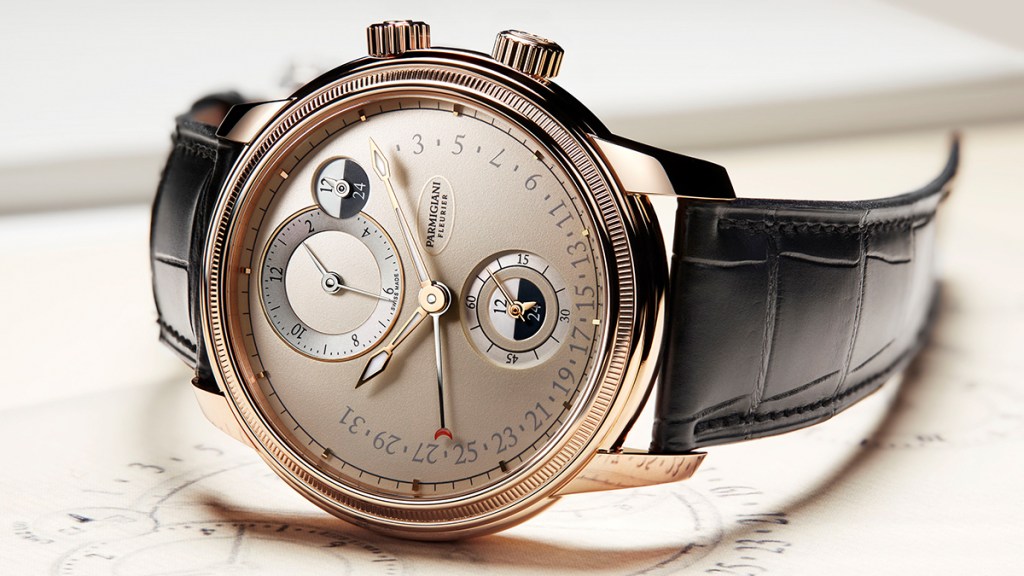 Hot on the heels of the launch of the Toric—a watch modeled after Michel Parmigiani’s first creation from 1996—the line has been expanded with the unveiling of the Toric Hémisphères Rétrograde. Offered in rose gold and priced at $29,500, Parmigiani’s latest dual time caliber—the PF317—is based off of their existing PF331 self-winding movement. It features a power reserve of 50 hours, supplied by a pair of series-coupled spring barrels.

A separate module indexed to the main movement takes care of its 2nd time zone function, adjusted via its crown at 2 o’clock. The second crown at 4 o’clock provides winding and setting function of the two synced time zones; it also delivers the retrograde date indication. According to Parmigiani, the 240-degree retrograde hand is activated by a significant spring tension, and its return-to-home sweep is so rapid that it cannot be seen by the naked eye.

With its added complication, this latest Toric model increases its case size to 42.8mm in diameter. Case thickness was not available at time of publishing, however we do know its movement is just under 2mm thicker than that of the Toric Chronomètre. Thus, we anticipate its case will be a touch over 10mm—still within reason. The same grained white dial finish carries forward from the first variant as well, which we were quite enamored with upon its unveiling. Parmigiani seems to be moving towards more conservative aesthetic codes than we’ve seen from the brand in years past, and we’re eager to see what else may be coming down the pipeline before 2017 comes to a close.