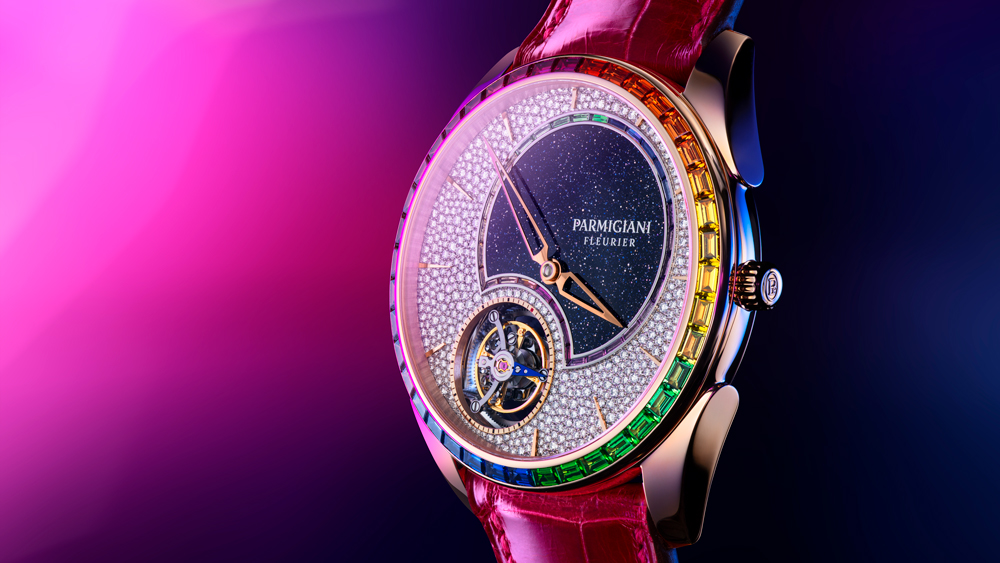 Parmigiani Fleurier has just released a wristwatch that’s the horological equivalent of the pot of gold at the end of the rainbow.

“A rainbow is generated by the rain, a recurring phenomenon in the Val-de-Travers,” says brand founder Michel Parmigiani, a master watchmaker and restorer. “Fleurier is surrounded by mountains and hills where the clouds play hide and seek. Clear and dark clouds play rainbow revelation. It’s very common in the area. The rainbow is the revelation of good weather after the storm.”

What’s more, the backdrop dial is snow-set with 572 brilliant-cut diamonds painstakingly set in different sizes to create the effect of glittering snow.

The Tonda 1950 Double Rainbow Flying Tourbillon owes its kaleidoscopic good looks and ingenious mechanism to four standout predecessors: The Tonda 1950 Clarity from 2016, which demonstrates Parmigiani’s expertise in diamond-setting; the Tonda 1950 Galaxy from 2018, which features an aventurine dial; the Tonda 1950 Rainbow, whose single row of multicolors gems paved the way for the new model’s double rainbow; and the Tonda 1950 Tourbillon, which is equipped with one of the world’s slimmest flying tourbillons.

Like its forerunner, the Tonda 1950 Double Rainbow Flying Tourbillon has its whirring device at the 7 o’clock position, a subtle reference to Michel Parmigiani’s birth time: 7:08 am on Dec. 2, 1950. That’s not all: The model’s Cotes de Genève-decorated caliber is integrated directly into the movement’s main plate and, as a result, measures just 3.4 mm thick.