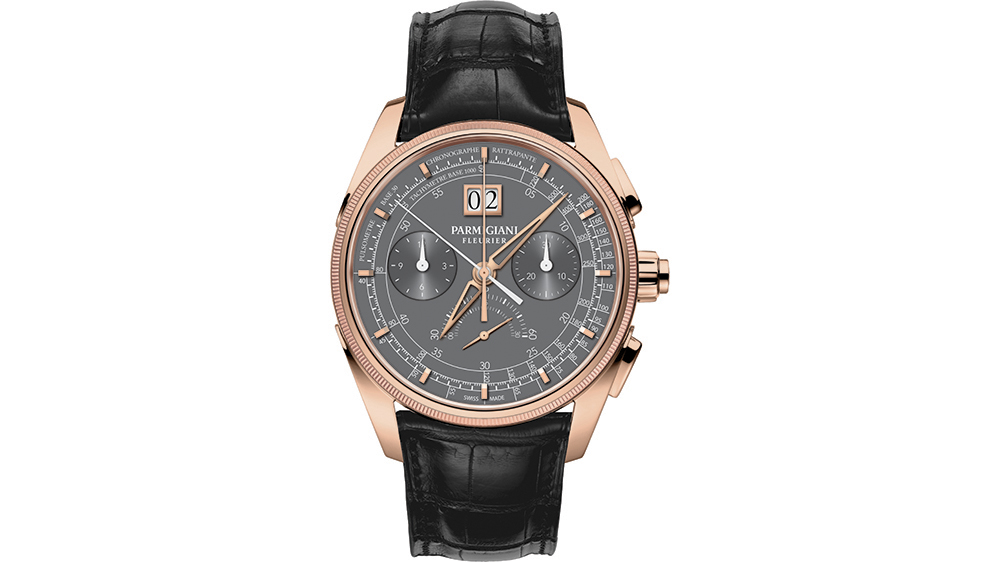 Parmigiani is no stranger to watchmaking feats: Michel Parmigiani is considered to be among the greatest living watchmakers. So it was no surprise when the brand wowed with its first integrated chronograph, to mark its 20th anniversary in 2016. The Tonda Chronor Anniversaire earned a top honor at the 2017 Grand Prix d’Horlogerie, Switzerland’s most esteemed awards ceremony for watchmaking.

The new version of the Tonda Chronor is made of striking 18-karat rose gold, with an opaline-finished slate dial, delta-shaped skeleton hands and a bezel that has a polished finish on its interior.

An integrated chronograph is a crowning achievement for all watch manufacturers, and since so few are able to produce one, it is also considered a holy grail for collectors. Parmigiani took six years to create the movement, and only a limited run of 25 for each of the four previous Tonda Chronor timepieces has been produced. “The PF361 movement is made in gold, and it’s incredibly well decorated with a hand-chamfered bridge,” says Parmigiani CEO Davide Traxler. “It’s very rare to add a flyback function, a split-seconds rattrapante and a big date on top of the integrated chronograph.”

Parmigiani went one step further by incorporating a vertical clutch, which activates the chronograph. A horizontal-clutch construction often causes the seconds hands to slightly delay its jump-off, whereas a vertical one has gears integrated into the wheel train, eliminating this effect for smoother, more accurate timekeeping. Adding to its precision, the timepiece has a high frequency of 36,000 VPH, or five hertz, meaning it can keep time to the nearest 10th of a second.

The rose-gold version will be the last iteration of the Tonda Chronor series, but at the Salon International de la Haute Horlogerie in April 2020, Parmigiani will present a new version of its gold chronograph movement, with a unique novelty complication that Trexler says has never been done before. Until then, you would do well to get your hands on one of the 25 versions of the last Tonda Chronor—and only eight will be delivered to the US. “It’s the most aesthetically remarkable piece in our collection of watches, in terms of movement decoration and conception,” says Traxler. “This may sound wrong, but it’s something that’s very easy to sell.” Translation: Call your authorized dealer ASAP.