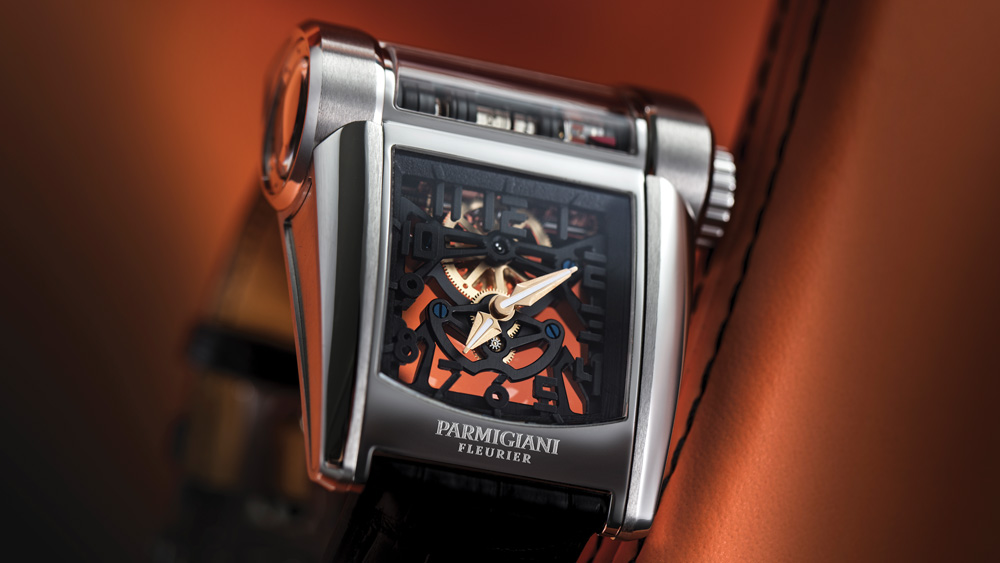 “With the Bugatti, I think we really opened a new dimension. The ability to reorient the source of energy is something completely new.”—Florin Niculescu, Parmigiani Fleurier

In 2004, Parmigiani Fleurier’s newly unveiled Bugatti Type 370 created a sensation among watch collectors with its radical rethinking of movement architecture. Instead of wheels and plates lying flat on the wrist, the Type 370 presented a construction elongated by columns that sat transversely across the wrist. It looked like a car engine, an especially apt design for a product tied to the Veyron supercar from the revived Bugatti marque. Nevertheless, while the design was revered and produced in very limited numbers for over a decade, it was also technically inflexible. Parmigiani’s engineers found they could only complete major design updates with a new, somewhat more conventional movement and a dial oriented at 90 degrees through conical gearing—a solution first shown in 2010’s sinuously curved Super Sport.

The latest Bugatti timepiece from Parmigiani, the Bugatti Type 390—shown for the first time in the fall of 2017—brings back the transverse movement architecture in a more modern and adaptable package. Housed in a cylinder, the movement stacks a flying tourbillon at one end followed by a going train in planetary gears, two winding barrels, and a conical-geared power-reserve indicator at the opposite end. Time indication is on a perpendicular plane from the cylinder, with the power transmission performed by a column of worm gearing (the action is a little like a spinning corkscrew). In fact, the whole case articulates around the movement, adding comfort for the wearer and, according to the company, taking a direct cue from the car.

“The engine in the Bugatti is attached to the cockpit in the center of the car, and the two rear wheels are supported by the engine itself,” says Florin Niculescu, vice president of product development at Parmigiani Fleurier. “We wanted to mount the movement in a similar manner.”

Also like the car, the watch is produced to the specifications of the owner in different combinations of colors and materials. But more importantly, the movement package is designed to allow far greater creative license in forthcoming versions. “The 390 opens a new dimension for the future,” says Niculescu, “because I can put the movement wherever I want around the wrist, pick up the energy, and use it for any type of time display.”

2004
Parmigiani launches its Bugatti Type 370, with a transverse movement, to great acclaim.

2010
The Bugatti Super Sport, whose dial is oriented 90 degrees from the movement plane, makes its appearance.

2012
Parmigiani dresses the Super Sport in titanium and Texalium and dubs it the Bugatti Vitesse.

2014
The brand marks a decade of its Bugatti partnership with three engraved and decorated editions of the original Type 370.

2016
An all-sapphire version of the Super Sport is introduced.