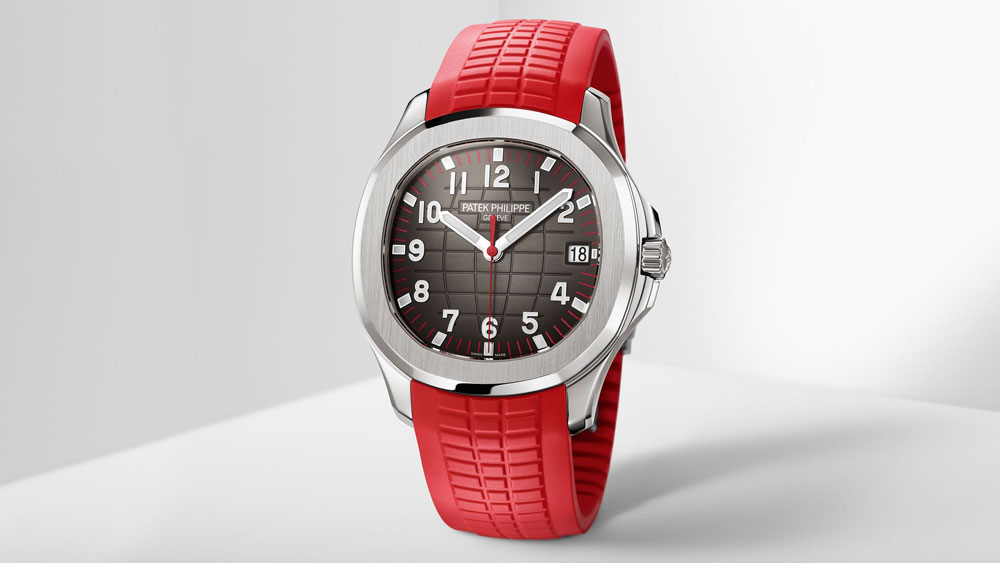 Love it or hate it, you can be assured that Patek Philippe’s new red Aquanaut is going to be hot as fire. The watchmaker unveiled the new Ref. 5167A today just ahead of its grand exhibition in Singapore, which opens to the public tomorrow and runs through October 13th. The steel watch, with the exception of the Nautilus or ultra-high complication pieces, is one of the hardest-to-get Patek Philippe models today. You will be hard pressed to find any 2019 model at retail and if you come across one on the secondary or grey market, you can expect to pay double its original price.

The new version is, forgive us, not for everyone. This baby will only be available in Singapore. You may be thinking to yourself, “No big deal. I’ll book my plane ticket now.” But even the jet-set won’t be able to get their hands on the new red Aquanaut. Why? Word has it they will only be available to residents of Singapore and other Southeast Asian countries including Malaysia, Thailand, Vietnam, the Philippines and Indonesia. But if you really, really want one then you better start working your contacts in Asia—the big spending Patek Philippe kind.

The Aquanaut was the brainchild of Patek Philippe president Thierry Stern when he stepped in, as the fourth generation, to lead his family’s business into the future in 1997 and it has increasingly been a major success for the brand. At today’s press conference prelude to the grand exhibition—the largest of its kind to date—Stern talked of his sons who will one day run the family business, both of whom were present, emphasizing that there are no plans to sell the company. “I’m starting to train one of my sons and he is already doing a watchmaking school,” Stern told press. “My other son is also here to learn, but I will have to hide him from you because he is a little bit too young.” It’s easy to imagine that the Aquanaut, thanks to its modern appeal, might be their own watch of choice but we’ll have to wait at least two or three decades to see what they will come up with when it’s their turn at the helm.

The new Aquanaut is a follow up to the olive-green version released earlier this year (the 5168G, which we personally prefer) and comes on the same tropical rubber strap in a 40 mm steel case with a time and date display. The new watch is limited to 500 pieces, and while its price has not yet been announced, you can expect that orders are already being placed as you read this.