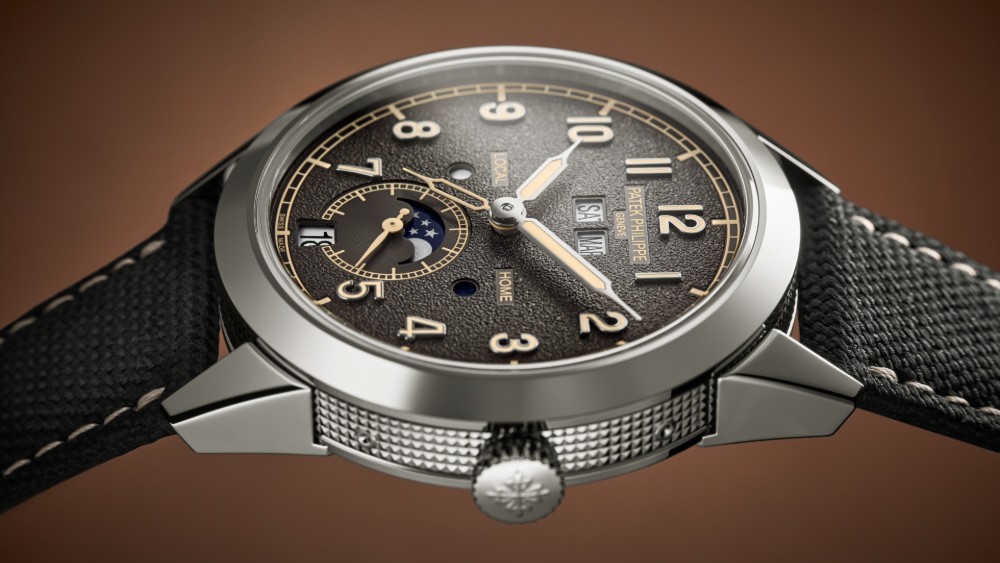 Naturally, when it came to predictions for what new offerings Patek Philippe would unveil at Watches & Wonders in Geneva this year, much talk was of a certain uber-iconic timepiece, released in 1976 and first inspired, horological folklore has it, when its creator Gerald Genta stared at the porthole of a transatlantic ocean liner whilst lunching.

Almost 50 years after its introduction, the Nautilus can be called the most prestigious sports watch in the world without fear of hyperbole. Alas, there was to be no update now, in another year that we’re creeping closer to its 50th anniversary.

The watch release Patek has talked most about to the throngs in Geneva today, though—and with which we begin our round-up below—deserves its place at the top of the billing.

You’ve got two pretty big things going on here. One, the Annual Calendar complication, came into being in the late ’90s when Patek Philippe’s engineers devised a wheels-and-pinions mechanism that could distinguish between months with 30 and 31 days, meaning it only had to be adjusted once a year.

The other, the Travel Time complication, was conceived in mid-1950s, when Patek enlisted watchmaking legend Louis Cottier with the task of creating a piece that could jump time zones without the itinerant wearer taking the watch off the wrist.

Now, the two have come together for the first time, in the form of a piece in white-gold that will adjust the date (for 11 out of 12 months of the year) when the time zone is corrected.

The home of the new self-winding caliber movement, which packs eight patents in all, is a new Calatrava case with flanks that feature a hobnail pattern in guilloche, while the dial’s white-gold applied numerals and hour/minute hands with beige luminescent coating, set against the textured charcoal-gray backdrop of the dial, complete a vintage appearance.

The moon phases complication was introduced to the world by Patek Philippe in 1925. Now, nearly a century on, this version introduces a moody, nocturnal iteration to the canon.

From shades of lush jungle vegetation to darker forest hues, green dials have been fluttering the heart of the watch world for some time—and the affair shows no sign of abating. Now, the Blue Sunburst 5205G has a new sibling with an olive-hued sunburst, making it one of several of today’s Patek drops to take on a  green shade (including arrestingly bold lacquered greens on the Ref. 5270P Perpetual Calendar Chronograph and the 5270P Chronograph Perpetual Calendar).

Once again, that one-correction-per-year moon phase mechanism, invented and patented by Patek Philippe in 1996, is working behind the scenes.

Not one for wallflowers: Patek calls this, a platinum version of a piece released in white gold with a blue enamel dial last year, its “Haute Joaillerie,” or fine jewelry, version—and with good reason. Baguette-cut diamonds circle the caseband, minute repeater slide and sloping lugs. The concave bezel has more, a double row in fact (can you imagine the intricate diamond cutting involved?), and there’s still more on the bezel’s integrated flange, broken up at intervals with blue sapphire hour markers.

It’s not one for those who like to be aurally inconspicuous, either: Patek is referring to the minute repeater’s sounding units, which have been wrapped almost twice around the movement to maximize the vibrancy and intensity of the sound, as “cathedral” gongs.

Buyers can choose a sapphire crystal case back (instead of platinum) if they want to take in the theater of a hand-finished movement with guilloched 22K gold mini-rotor. The strap is in blue Alligator leather.

One of three new world-time watches introduced by Patek this year—a triple-whammy homage to the man who invented it, the aforementioned Louis Cottier in the 1930s—this is the first Reference 5230 to come in platinum with a blue dial—with a hand-guilloched, basket-weave dial at its center—and a blue strap.

Around the edge of the dial, city names corresponding to the 24 time zones are printed in white on a blue background, a black-gradient rim boosting legibility. Its inner section sees the local time in the zone selected displayed, at 12 o’clock, by a skeletonized hour hand which was inspired by the “Southern Cross” constellation. A lozenge-shaped minute hand completes the dial’s pleasingly busy visual whole.

The bezel is thin and understated, the lugs wing-shaped and the strap is calfskin leather in navy with cream stitching, nubuck finish and platinum fold-over clasp.