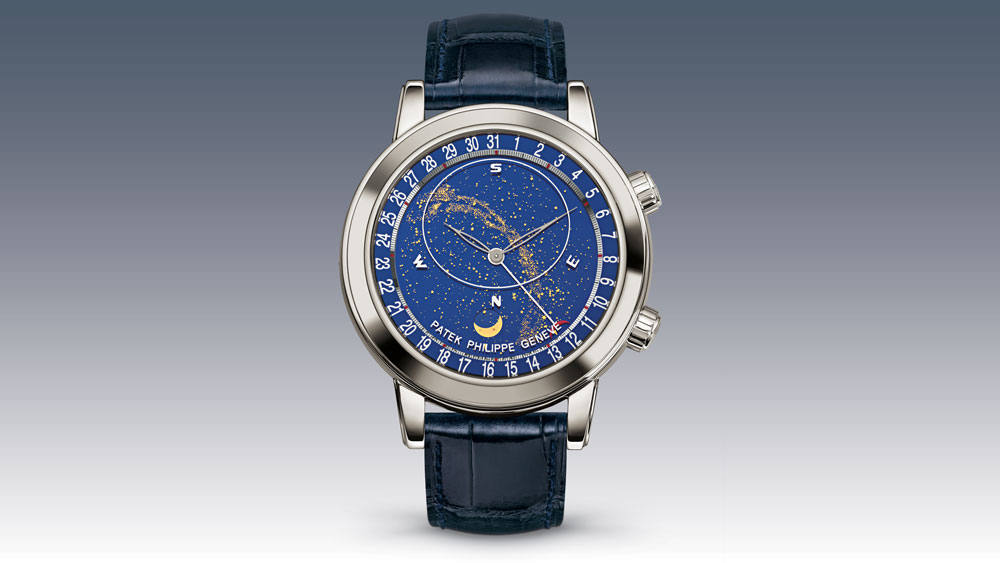 The 6102 is a stunning watch, but it may well confound its observer. To wit: What exactly is the 6102 indicating, and how is it doing it?

Let’s start by answering the first question and begin with the easiest indications. The 6102 has three centrally mounted hands. Two skeletonized feuille hands indicate the hours and minutes, and an additional white hand with a red crescent tip indicates the date on the periphery of the dial. The crown at 2 o’clock is used for winding (position 1) and setting (position 2) the time; a discreet pusher sits at 9 o’clock on the caseband and is used to set the date. That’s the simple side of the coin.

A sky chart is a reading of the night sky from a particular latitude, hemisphere, and time. It features an elliptical frame known as a “planisphere,” which represents the horizon. In other words, what sits in the frame is visible to the observer, and what sits outside is below the horizon respective to the observer. In the 6102, you have a Northern hemispheric view of the sky and a planisphere that represents the seen and unseen portion of the hemisphere from the latitude of Geneva. The sky chart will often feature inverted cardinal points.

Imagine you are standing on a hill in Geneva at midnight. You take a look at your compass, turn to face north, carefully remove your 6102, and hold it dial-down above your head. From this inverted position, the cardinal points now indicate their respective directions and will help you to identify your desired stars.

A meridian is an imaginary line of longitude. Imagine this line running right out in front of you, due north, down the hill and to the horizon, continuing into the sky, arching over your head, returning to the southern-most point of the horizon, and then returning to you. In our example, this is your meridian line—the Genevan meridian line—and it cuts across the 6102 from 12 to 6 o’clock.

Sirius, also known as the Dog Star, is the brightest star in the visible night sky. In fact, Sirius is a binary star, consisting of Sirius A and a smaller white dwarf “pup,” Sirius B, which is not independently visible to the naked eye. The pup orbits the Dog Star, which is extremely unusual in our observable universe; it completes this elliptical orbit once every 50 years and rotates on its own axis a staggering 23 times per minute. As a consequence, it is said that one teaspoon of Sirius B would weigh 5 tons on Earth.

But all that is beside the point. The role that Sirius plays on the 6102 is that of the reference point. If you scan the dial of the 6102, you will eventually see a star toward the periphery that is larger than any of the others. Adjacent to Sirius, on the edge of the dial and in line with the central pinion, is a small arrow. It indicates against a thin chapter ring that has 24 large and 288 small divisions, which we shall come to shortly.

So Sirius is the reference star for your view of the Genevan sky at night; you can reference it on the sky chart of the 6102 as you track its passage to and from the meridian line. Sirius will cross the meridian once every 23 hours, 56 minutes, and a fraction over 4 seconds. This is known as a sidereal day. Why is this not the same length as a 24-hour mean solar day? Because the Earth is orbiting the Sun, it has to rotate more than 360 degrees for the Sun to appear to cross the meridian. As a result, it takes a little longer, 24 hours, for a mean solar day to occur.

Passage and Orbital Position of the Moon

As with Sirius, the Moon will make its way across the same meridian line. However, as the Moon is not a fixed star in the night sky, it doesn’t pass once every 23 hours and 56 minutes. Instead, the Moon will pass the meridian once every 24 hours and 50 minutes. This occurs because the Moon is orbiting us in the same direction that the Earth is rotating, so yet again the Earth needs to rotate even more than a solar day for the Moon to cross the meridian.

What makes the 6102 stand out from almost all other wristwatches with sky chart complications is the fact that this passage of the Moon has been mapped to the sky chart. So not only can you track the movement of the stars in the sky but the position of the Moon, as well. Like Sirius, the Moon has a small arrow adjacent to it, also indicating the chapter ring.

The astronomical complexity of the 6102 does not stop there; in addition to the position of the Moon in the sky, the 6102 can simultaneously depict the phase. This is the proportion of the Moon that reflects the Sun when viewed from Earth. It takes 29.53 days to complete the full cycle from New Moon to Full Moon and back again.

How Does It Work?

Now that you have your head around the “what,” the “how” can be better appreciated. It should already be apparent that little short of horological mastery could depict three astronomical cycles on the same dial with three incompatible divisions, none of which are compatible with the 24-hour solar day. Yet somehow Patek Philippe has managed exactly that, and kept it within the 6.81-mm headroom of the 240 LU CL C caliber.

To understand the impressive movement of the 6102, you need to appreciate that the dial displaying the sky chart and the Moon is not a single dial. It is composed of a blue sapphire-crystal disk with a Moon aperture (disk A), a small moon-phase disk beneath that aperture (disk B), and a transparent sapphire crystal over the top of disk A decorated with the sky chart on the front and a depiction of the Milky Way on the underside (disk C). All three disks are no more than 0.2 mm thick.

Disk A has 279 teeth, additional planetary (reduction) gearing drives disk B, and disk C has 356 teeth. Such excessive quantities of teeth allowed Patek Philippe to leverage some extraordinary gearing ratios so that these celestial disks can be driven by the same 3-Hz-regulated mainspring barrel as the timekeeping gear train. If you turn over the watch—and if you can take your eyes off the micro-rotor and Spiromax® balance—with some careful inspection you might notice a small wheel almost concealed by the back bezel below the last engraved “E” of “GENEVE.” This is the intermediary gear for the celestial complications and the beginning of an extremely impressive chain of ratios, delivering astronomical indications no less bewitching than their real-world phenomena.

How Is It Set?

The crown at 4 o’clock is pulled to position 2 in order to adjust the Moon (by turning clockwise) and the sky chart (by turning counterclockwise). The Patek Philippe website has a guide for entering the desired date and time; the moon and sky complications are given respective instructions for setting. The start position and phase of the Moon is full, with its adjacent arrow to the S cardinal point (12 o’clock); the start position for the sky chart, like the moon, is the arrow of Sirius pointing to S at 12 o’clock. It then comes down to a series of large and small divisions on the chapter ring as per the instructions.

With patience and diligent adjustment, the 6102 will eventually ignite with a set of profoundly accurate and equally heavenly readings. Now its owner must find a way to a quiet clearing in Geneva and wait for the Sun to set.