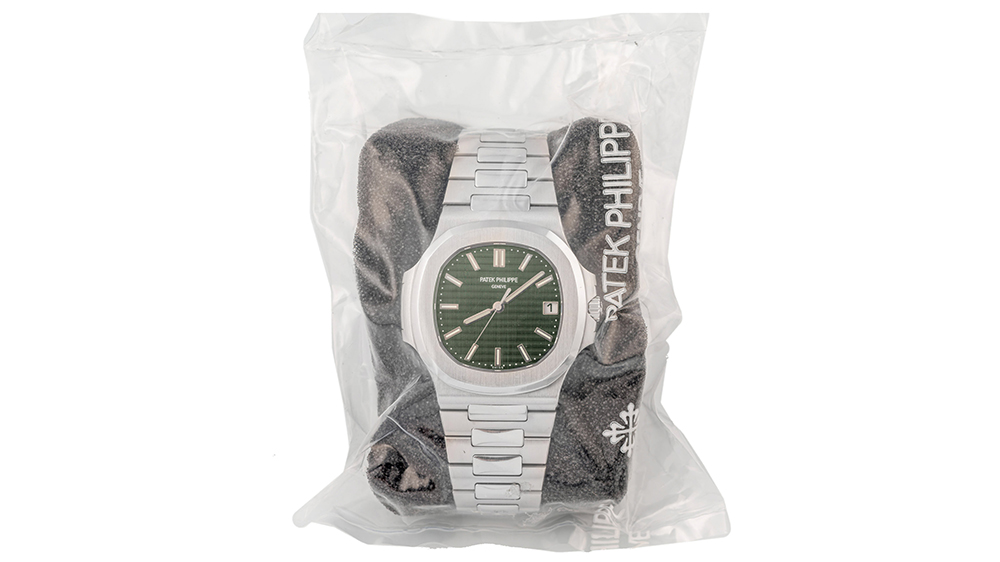 Earlier this month, this magazine spotlighted a new Patek Philippe Nautilus with an olive-green dial. We called it the hottest watch release of 2021. Now, a never-before-worn example of the watch has sold at auction, but not before shattering pre-sale estimates.

On Wednesday, the first green dialed Nautilus piece to reach auction from the Swiss watchmaker sold for $376,000 in Monaco. Sealed in plastic factory wrapping, Ref. 5711/1A-014 Nautilus was presented to bidders in Antiquorum’s Important Modern & Vintage Timepieces sale. The stainless-steel timepiece, which showcases a three-hand automatic movement, sold for 11 times its original $34,893 price tag. The watch’s final price is estimated to be $470,000, including the auction house’s 25 percent premium.

Introduced by Patek Philippe in April, the timepiece was released as a replacement for the watchmaker’s now discontinued Ref.5711/1A-010. The blue-dialed watch was met with high-demand before being discontinued, even though clients had been reportedly waitlisted for years to acquire the reference. To offset overwhelmingly high resell prices for the coveted Nautilus, the manufacturer released the olive green dialed version.

Like its predecessor, the new watch has become so popular that it is almost impossible to find. In fact, the piece is so sought-after that the sons of Patek Philippe president Theirry Stern couldn’t snag one for themselves. “Even my sons are asking, ‘Can I have one?’,” Stern told WatchPro in an interview. “But the answer is no. On the positive side, though, it’s part of the beauty and myth of Patek Philippe.”

Accented by luminescent hands and white gold hour markers, the eye-catching green dial delivers a striking contrast with the figure’s stainless-steel case and bracelet (both featuring satin brushing and polishing). The self-winding timepiece is also powered by a 26-330 S C mechanical movement and is water-resistant for up to 120 meters. However, perhaps what makes this watch such a hot commodity is the packaging that keeps it in mint condition.

In 2017, Patek Authorized Dealers were ordered to cease the supply of sealed watches to customers to prevent inflated resale prices. A retailer ignored this rule, and it’s reported that the watchmaker will likely take action once the dealer is confirmed. Pre-sale estimates for Ref.5711/1A-014 ranged from $60,000 to $180,000. Now that the timepiece has hammered down for more than double its high estimate, Patek Philippe may well have a new classic on its hands.