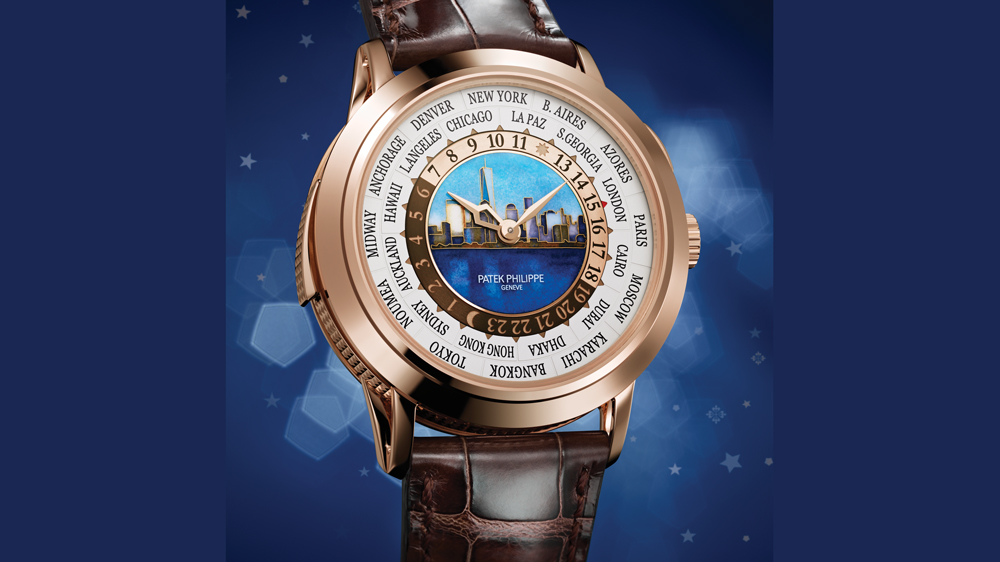 The modifications inside Patek Philippe’s new Reference 5531 World Time Minute Repeater may not seem terribly revolutionary to the many watch collectors who have become numb to the frantic pace of technical development in the industry. But when considered within the context of Patek Philippe’s highly traditional—and highly sought-after—minute-repeater program, the introduction of the Ref. 5531 represents a notable change in the way the company makes the prized complication.

The Ref. 5531 (price upon request) is derived from the tried-and-true movement of Patek Philippe’s R 27 automatic minute repeater. The world-time mechanism, which allows the user to change time zones at the push of a button, is added on top of the repeater base movement. But unlike previous extra complications the house has attached to (but not integrated with) the R 27, the world-time mechanism is connected directly via a pinion to the hour snail, a part of the repeater that allows it to recognize the correct time. The snail can now rotate freely, allowing the chime to reflect the local time in the selected city. Once the chime has been engaged, an isolator and a modified all-or-nothing system prevent potential damage from further operation of the pusher.

The updated R 27 movement’s gongs are anchored to the side of the case to better propagate their chimes. The world-time mechanism (left) is added on top of the base movement and integrates directly with the repeater function.  Photo: Courtesy Fabien Cruchon

The most interesting change, however, may be inside the repeater itself. The base plate of the movement has been expanded by 2 mm, and for the first time, Patek Philippe has anchored the resonant gongs to the sides of the case rather than to the main plate of the movement. These changes were made primarily for acoustic reasons. “This minute repeater has all the qualities of our other minute repeaters,” says Barat. “The sound is very warm and long, but with the addition of the power, it is much louder.”

When it was introduced in 1989, the Patek Philippe R 27 was a state-of-the-art repeater movement with an automatic winder and an inertial flywheel to govern the tempo of its strikes. And while the company did release a tourbillon-repeater movement three years later, the original R 27 is at the heart of most of the more than two dozen repeater references it has debuted since.

This consistency has its advantages. Over the years, Patek Philippe’s makers of complicated watches have mastered the art of tuning the repeater, which is widely acknowledged to produce the best-sounding chime in the industry. The brand’s clear, supple signature tone can be matched with a number of different alloys of gold and platinum, as well as a variety of movement and case masses. A library of over 20 different lengths and calibers of gongs assists the watchmakers in fine-tuning the sound via traditional techniques.

Although Patek Philippe repeaters are subjectively pleasing to the ears of many collectors, a more empirical measurement—loudness—reiterates the original R 27 movement’s age. Designed to be small and svelte, the movement does not possess the powerful springs of other larger, more modern repeater calibers. Some of these newer watches are specifically designed to project higher-intensity sound, making the chime a much more shareable experience.

The new gong arrangement inside the Ref. 5531 addresses this lack of forcefulness by directly engaging an outside surface to propagate sound waves. Barat and his team also solved another problem inherent in the conventional design of the R 27. The ceramic ball bearings in its winding system had always required careful adjustment to prevent errant vibrations during the strike. The additional moving plates of the world-time display threatened to create an entirely new set of acoustic difficulties. “We built two prototypes for this reference, one with the gongs secured to the plate, as before, and another with the gongs secured to the case,” says Barat. “In the [conventional] prototype, everything was vibrating. We realized two things when we compared the sound. Because the gongs are disconnected from the plate, there is no more bad vibration coming from the automatic winding-system bearings. The sound is purer and stronger.”

Patek Philippe’s makers of complicated watches have mastered the art of tuning the repeater, which is widely acknowledged to produce the best-sounding chime in the industry.  Photo: Courtesy Patek Phillipe

With skeletonized lugs and a belt of Clous de Paris guilloche around its mid-case, the rose-gold Ref. 5531’s decoration is just as inspired as its technical achievements. Although the model’s production run is limited to just 10 examples—five with a cloisonné enamel rendering of the Manhattan skyline by day and five with the same motif by night—the company clearly plans to release subsequent editions of the World Time Minute Repeater in years to come. If previous acoustic references from Patek Philippe are any indication, collectors should quickly snap up these watches. When lessons learned from the Ref. 5531 begin to be incorporated into future repeaters from the brand, interest only stands to increase.