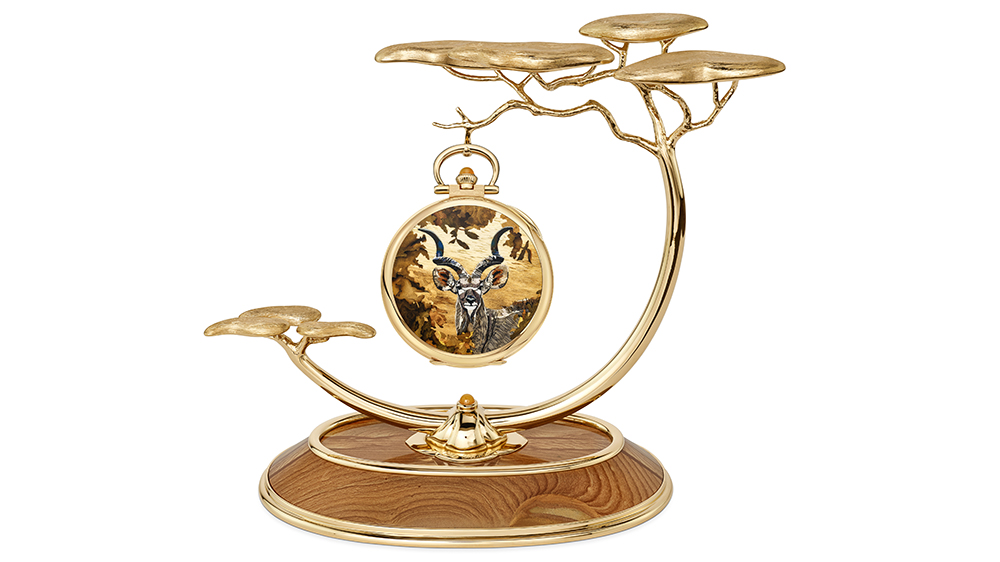 Patek Philippe is bringing its horological masterpieces to your home.

The Swiss watchmaker launched a new digital tour recently that gives collectors a chance to peruse the wonders of the Rare Handcrafts exhibition entirely online. The show debuted back in April at the Patek Philippe Salons in Geneva, before moving to Paris the following month. As its title suggests, the retrospective showcases some of Patek’s most coveted handcrafted designs of all time.

Housed in two distinct “rooms,” the collection comprises 59 pieces in total, including 24 dome table clocks, 10 pocket watches and 25 wristwatches. During your virtual visit, you’ll be provided with detailed information about each rarity and learn precisely how it was created by Patek’s skilled artisans.

The tour’s “zoom” feature also makes it easier for you to admire the painstaking details of each piece; intricacies you may not have noticed in a crowded gallery IRL. The “Dom Robert” Calatrava wristwatch, for example, sports a traditional grisaille enameling technique on the dial known as Blanc de Limoges. Details on exactly how the white enamel was sculpted over the black enamel and then etched away to create a peacock motif are explained via the tour’s expert commentary. There is also a selection of dome table clocks with Grand Feu cloisonné enameling on display. French for “large fire,” Grand Feu is a complex oven-baked enameling process that Patek is evidently committed to preserving. Another standout is the zebra pocket watch that is embellished with a staggering 6.5 feet of 24-karat gold wire.

“We also hope to catch the interest of younger generations for the artisans’ rare métiers, inspire them to learn about them and maybe one day work in this artistic field.”

Patek isn’t the only luxury watchmaker going digital, either. IWC also introduced a virtual tour of its timepieces shortly after it opened a new Swiss factory in 2018. There are more shows on the horizon, too.

“This first experience is the start of a series of exhibitions that will offer the virtual tour experience to all who are interested,” Steel added.

What a time to be online.