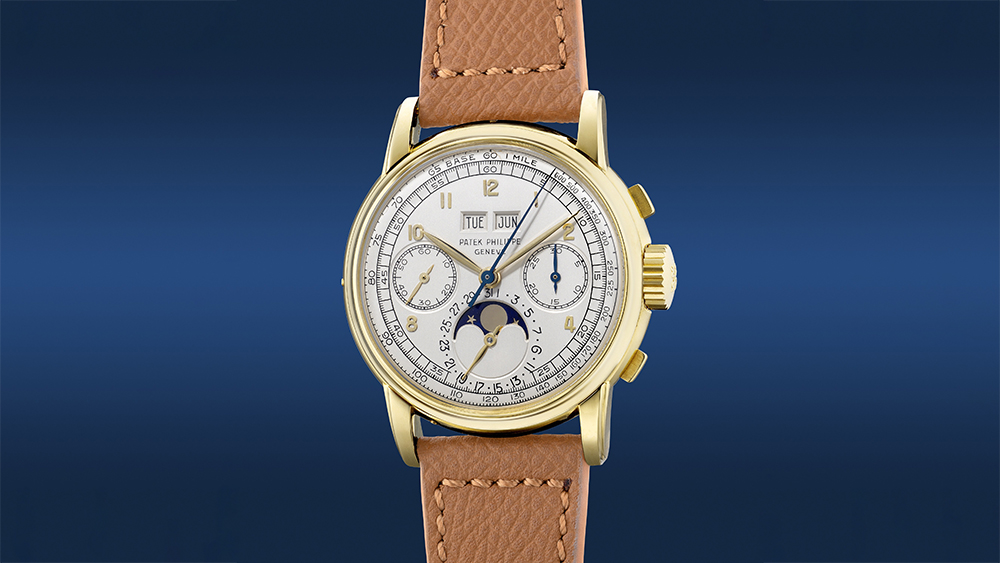 The Ref. 2499 in question is considered a holy grail timepiece among top-tier collectors—and for good reason. The perpetual calendar chronograph was introduced in 1951 as the successor to the groundbreaking reference 1518. The watch had all the complex mechanics and elegance of its predecessor but was equipped with a new case inspired by the industrial aesthetic of the ‘50s.

During the model’s 35-year production run, Patek Philippe produced 349 examples and created four separate but almost identical models that collectors refer to as “series.” This particular yellow-gold timepiece is a coveted first series that was manufactured in 1953. According to Phillips, the rarity has been in private hands for the past 25 years and was last seen in public at an auction in 1997.

“Praised by many and yet rarely seen by most, the Patek Philippe reference 2499 is with no doubt an absolute treasure in the rich heritage of the firm,” Thomas Perazzi, head of watches at Phillips Asia, told Robb Report via email. “To many collectors, it is perhaps one of the most impressive wristwatches ever made by any manufacturer.”

This example is reportedly in good nick, too. The auction house says the watch has been preserved in the same condition as it was last offered. It also comes with official paperwork from the Swiss watchmaker confirming the date it was manufactured and the subsequent date of sale on October 1, 1956. How’s that for history? Suffice it to say, the gold grail is likely to fetch a pretty penny. Phillips expects the watch to sell for between $1 million and $2 million. For context: a Ref. 2499 first series with a dial signed by both Patek Philippe and Asprey hammered down for $3.9 million back in 2018.

“The present example manufactured in 1953 housed in a Wengermade 37.5mm diameter case is truly a rare and momentous occasion for vintage connoisseurs and collectors of the highest caliber to have the chance to acquire such an example,” Perazzi added.

Naturally, the Patek will be in good company at the Hong Kong sale. The auction includes a range of highly important timepieces from industry powerhouses, such as Rolex, Audemars Piguet, Philippe Dufour, Roger Smith, F. P. Journe and Cartier, to name but a few. There will also be a number of other notable Patek Philippe references going under the gavel, too.

The Hong Kong Watch Auction: XV will take place at the JW Marriott in Hong Kong on November 28 and 29. Starting September 30, highlights from the sale will embark on a world tour in New York, Hong Kong, Bangkok, Singapore, London, Taichung, Taipei and Geneva.