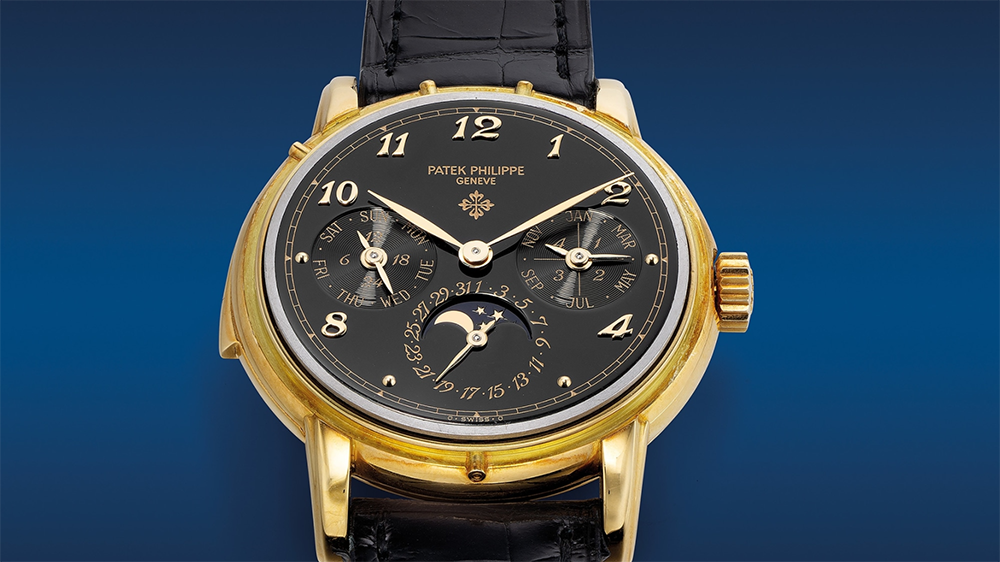 The timepiece in question, known as Ref. 3974, sparked a bidding war between 20 collectors at the Phillips Hong Kong watch auction over the weekend, before hammering for a hefty $2.5 million. That’s three times the pre-sale high estimate of $829,000 and a new world record for the reference.

Launched in 1989, Ref. 3974 was considered the most technically sophisticated watch of the time. The self-winding wristwatch is equipped with a minute repeater, a perpetual calendar, 24-hour indication and phases of the moon. It’s exceedingly rare, too, with only around 16 made in total.

Rarer still is this particular example. Billed as “possibly” one-of-a-kind by the auction house, it sports a yellow-gold case crafted by legendary casemaker Jean-Pierre Hagmann. It’s also been extensively customized by the Swiss watchmaker. The black lacquer dial, for instance, features a Calatrava Cross, italicized calendar indications and gold Breguet numerals to match the case.

This wasn’t the only record-breaking Patek at the auction, either. A Nautilus Ref. 5723 with the prestigious double stamp by Tiffany & Co. and 4 carats worth of rubies sold for $1.45 million to set a new world record for the model in gold. It’s also the second-highest price ever paid for any Nautilus. (Top place, of course, belongs to a Nautilus Ref. 5711 with the coveted Tiffany Blue dial, which sold for $5.35 million at Phillips New York last December.)

A number of pieces by independent watchmakers also exceeded their high estimates. The singular Vingt-8 Hisui by Kari Voutilainen, for example, achieved $561,834. That’s more than double what was expected and the highest price paid for a Voutilainen timepiece without complications.

The sale itself, which attracted some 1,900 bidders from across 62 different countries, pulled in a record $33.6 million across May 27 and 28.

“The two-day auction achieved the highest result for a various owner watches auction in Asia in history, and once again reaffirms collectors’ appetite and enthusiasm for seeking top-quality timepieces,” Thomas Perazzi, head of watches, Asia, said in a statement.