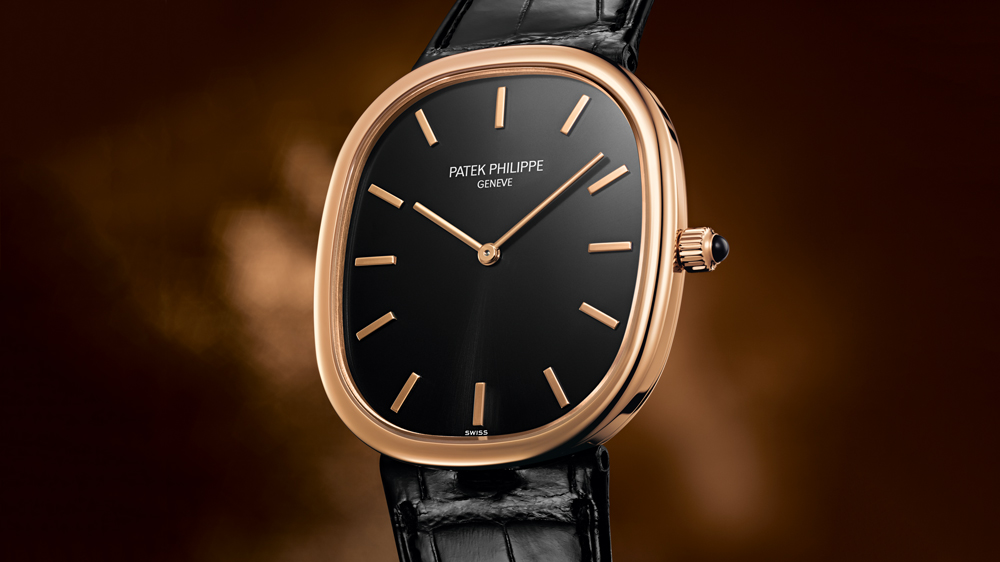 The Golden Ellipse has been around since 1968, a time when top brands were experimenting with out-of-round proportions, but the modern shape was actually inspired by a formula worked out by ancient Greek mathematicians. This year, Patek Philippe is once again focusing on its out-of-round watches, including the Nautilus, Aquanaut, and the new 50th anniversary edition of the Golden Ellipse Ref. 5738R. First introduced as a yellow gold dress watch, the Golden Ellipse was followed by both white and rose gold models, but all gold pieces in the collection were discontinued recently, leaving only a platinum model that was introduced in 2008.

This year, the Golden Ellipse returns in rose gold. The name is derived not from the case metal, however, but from the shape. Its proportions reflect the golden section, a length-to-width ratio of 1:16181 often referred to by ancient Greek mathematicians and modern architects and designers as the divine proportion—the one most pleasing to the eye. The platinum version was the first to debut in the “jumbo” size. Its proportions, 34.5 x 39.5 mm, don’t seem very jumbo unless compared with the original, which was 27 x 32 mm, or the smallest Golden Ellipse ever made, a 23.2 x 29.2 mm jewelry watch.

Jumbo or not, the Golden Ellipse carries the distinction of being the thinnest watch in Patek Philippe’s current collection, with a case thickness of just 5.9 mm. It contains the ultra-thin automatic Caliber 240, a movement developed by Patek in 1976 when watches were much smaller due to the dominance of quartz technology. The caliber has been optimized over the years, and liberally redeployed recently with the return to thinner, vintage designs. The original Caliber 240 debuted in the Golden Ellipse at Baselworld in 1977.

The anniversary edition Golden Ellipse is made from 18-karat rose gold. The dial, which has always been starkly minimalist, has not changed significantly since it was introduced. The 18-karat rose gold hands and markers are applied to a sunburst dial in either black or the original blue color. A black onyx cabochon is set into the winding crown of the black model. The strap is black alligator. The Golden Ellipse Ref. 5738R is priced at $30,846 and the platinum model, Ref. 5738P, is $50,464.