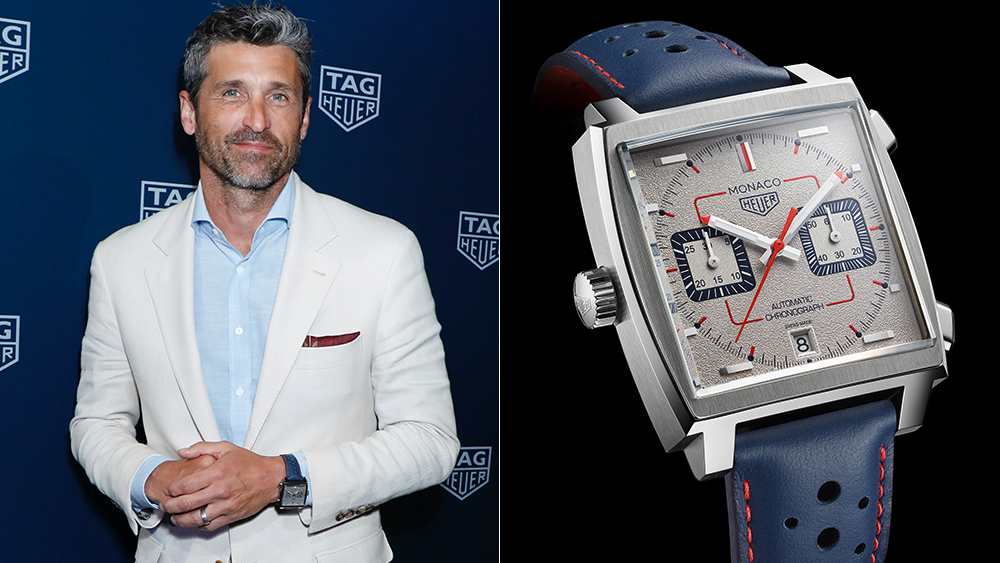 For Patrick Dempsey, collecting watches isn’t just about a fascination with mechanisms and craftsmanship. Each one of the timepieces he owns carries an emotional significance that makes it even more valuable than the metal it’s made from and the movement whirring away inside.

Take for example the new TAG Heuer Monaco 1989–1999 Limited-Edition Timepiece, unveiled on Wednesday night in New York City. The watch is the third of five limited-edition timepieces designed to celebrate 50 years of the model’s history in the automotive realm. And while he hasn’t raced in a few years, as a TAG Heuer brand ambassador, Dempsey was already wearing one when we spoke to him at the event, held on the same day as (and, at Cipriani, a stone’s throw away from) the US Women’s Soccer Team’s triumphant parade in Downtown New York.

“This one represents New York and the World Cup and the women winning and being here on Wall Street,” he said. “It’s so New York: a ticker-tape parade on Wall Street.”

He also scored a major win this year, when he was elected as the winner of The Spirit of Le Mans award at the 24 Hours of Le Mans. It’s the kind of accomplishment that makes his relationship with TAG Heuer, a sponsor of the Dempsey Proton Racing team, which he co-owns, that much more meaningful.

“There’s been an incredibly collaborative experience, creatively,” he said. “I’ve learned a lot from this experience and very proud to be a part of that.”

Of course, watches (and cars) both play a much bigger role in Dempsey’s life than simply marking the time and getting from point A to point B. Which is why we asked him for his thoughts on everything from his favorite road trip destinations (and who he’d want in the car for the long haul) to what stands out about TAG Heuer’s long history of making watches built for adventure.

As a watch wearer, how does TAG Heuer figure into your personal collection? What about the brand initially attracted you?

Oh, it’s my biggest collection, the Monaco watch in particular, and I’m starting to get into the older timepieces as well. You know, when you look at the history of when it started, with skiing, certainly Jack Heuer with flying with adventure, even the tide watch that was done for Abercrombie and Fitch very early on. It was always geared towards adventure and activity. And certainly, motorsports, without question. And I like skiing. I like cycling. I like to be outside, like to be active.

You also like driving. If you could be driving anywhere in the world right now, on a road trip, where would you be going?

You know, there’s a great event and in Austria called the Ennstock Classic, and I got a chance to do that a few times in a 550 spider, and I was down a country lane and it was like I stepped back in time. I felt I was in the 1950s. And being on a country road in a convertible this time of year is really a lot of fun.

If you could invite any person, alive or dead, on a road trip, who would it be?

Westinghouse. I think if you look at the gilded period and you look at what he did for his workers—you know, he ended up losing his company money, sure, but…he allowed the people who worked for him to keep his patents, which is, I think, remarkable.

Who else would you want in that party?

Gandhi would be cool. I think, between him and a capitalist, it’d be fascinating. I wonder who would be talking and who would be listening.

I wonder who would be driving?

Depends on the size of the car. I’d be happy just driving and listening to the two of them speak.

What are you actually listening to when you’re on the road these days? Is it a radio station or a podcast?

I listen to public radio. Morning Becomes Eclectic from 9 am to noon, and then I’ll listen to the news or books on tape. Someone turned me onto The Seat of the Soul. I highly recommend it. It’s sort of about—I guess it would be Buddhist—why are we here? And what are we here to learn?

What’s the most interesting thing you’ve learned about TAG Heuer since you started working with the brand?

The Monaco watch was not a success initially and the only reason it made it the movie [Le Mans] is that they were looking for stopwatches, and Jack Heuer got a call from the property master and he had the Monaco watches in stock. Now it’s become this iconic design. People didn’t quite understand it at first. And I think it was the first automatic coronagraph too, so there’s a lot of firsts there that people didn’t know how to embrace initially. So, that in itself I think is fascinating and something to think about.