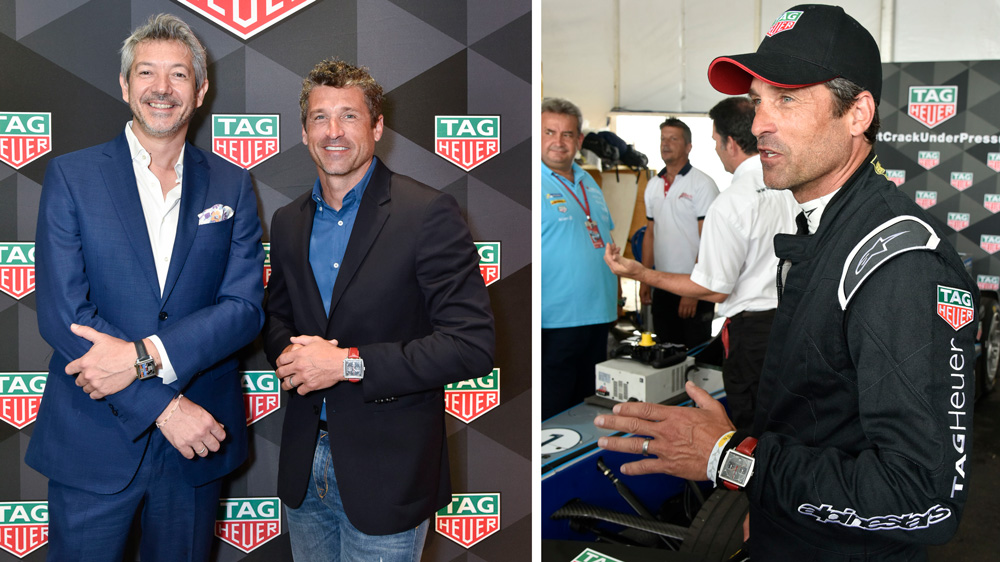 Dempsey, meanwhile, no longer competitively races, but his interest in the sport, the cars, and the watches that go along with it remains a passion. We caught up with Dempsey at the race to find out what accelerated his interest in the sport and how he became a collector of vintage Porsches and Heuer timepieces. Plus, the actor—forever known for the iconic TV series Grey’s Anatomy—has just ventured into directing and producing and has two new projects in the lineup tied to automotive racing. Here he fills us in on what drives his passions.

Were you interested in watches before becoming a Tag Heuer brand ambassador?

Yes—because racing and watches always go hand in hand—but not to the level that I’m at now. I have a much greater appreciation for the heritage of the brand because I work a lot with Jack Heuer. So I’m really fascinated by the history, and that’s the direction right now—I’m really a brand ambassador for the heritage aspect of the brand and how that’s really informing the future. It’s quite fascinating.

What are you wearing today?

I’m wearing a ’72 Monaco. I picked this up when I raced in Spa [Circuit de Spa-Francorchamps] for the first time. I was a brand ambassador for Tag Heuer at the time, but I actually purchased this watch myself. Most of the vintage watches I get from auction. When I went to visit the Tag Heuer factory in Switzerland, it was nice because they took my watch apart and fixed everything right in front of me. It was really a magical experience. I was just coming off the show [Grey’s Anatomy], and I wanted something to commemorate the completion of that and also something that would start my new relationship with Tag Heuer and racing. The watch really symbolized for me the ending of one period of my life and the beginning of a new one.

Do you collect watches?

I have a good collection now of diverse brands, but most of the vintage stuff I have is focused on Heuer timepieces. I really want to work with Jack Heuer on a watch, and we’ve been talking about that. I was in Monaco for the launch of the golf watch right before Le Mans, and we were talking about several ideas there. I would really love to work with him in that capacity with the technology that we have today, and he’s a technical engineer by nature.

Do you collect cars outside of racing?

Yes. I don’t really have any race cars because I sold those off to buy really interesting street cars. My first one was a 1963 356 Porsche Cabriolet, which I bought when I was really young after I did a film called Can’t Buy Me Love and I still have to this day. It was my daily driver for many years. I have a ’72 Porsche 911 T and an ’82 Porsche 911 SC that I souped up and dropped a 3.6 liter in it—it’s super-fast and more of an outlaw car. I have a 2015 Porsche 911 R, which is a contemporary car, and I also have a Porsche tractor from the ’60s which I just used last week on my farm in Maine.

I always loved it since I was a little kid. I always loved cars. My father was a big fan of it, and it’s the atmosphere, the excitement, the energy, and the mental and physical discipline of it. I think the fellowship of it is something that really appeals to me and how small the community is. I can go to an event and see people I know from around the world. We travel in this sort of nomadic community of motorsports.

What was it like the first time you got behind a car to race?

It’s funny, I thought about this recently. It was at Petit Le Mans, and I was doing a parade lap right before the race started, and I realized at that very moment that this was what I wanted to be doing. It was a passion that I didn’t realize moved me so deeply. That’s when it really started to accelerate. It’s been transformative all my life on a creative level, on a personal level, and being in the community has really changed me profoundly.

Why did you choose acting over racing initially?

It was just a natural progression of the way my life has worked out. But I actually started out ski racing—that was my real first love. But then I took up unicycling because of Ingemar Stenmark [Swedish former World Cup alpine ski racer], which got me into performing oddly enough. So to get back into motorsports is actually going full circle from being an athlete and being competitive. I’m now transitioning into producing and directing and creating. Life is about change, which is another reason why we’re here—to see extreme motorsports change and evolve. Certainly, with Formula E there is a lot of innovation, and you’re seeing more and more manufactures coming to the sport because of the opportunity and the way they promote their brand and what their ideology is moving forward. It’s about the consciousness of our environment and what we’re doing to protect that. I don’t think motorsport will go away. I think we’ll just keep refining it so it has less of an impact on the planet.

Do you have any plans to do any films with racing themes?

I just finished one last week. It’s called The Art of Racing in the Rain based on the book by Garth Stein, which is about a journeyman driver who eventually makes it to F1 but he has to overcome all of these personal hardships in order to get there, and it’s told from the point of view of his dog—Kevin Costner is the voice of the dog. Milo Ventimiglia also stars in it, and we just finished it a week ago. I don’t know the release date at the moment, but soon. It was 10 years in development, but we’re hoping it will be out by the end of this year, but we’ll see. I also did a documentary on Hurley Haywood, who was a very famous American endurance driver from the ’60s through the ’80s. I’ve been incorporating both passions, which I really enjoy.