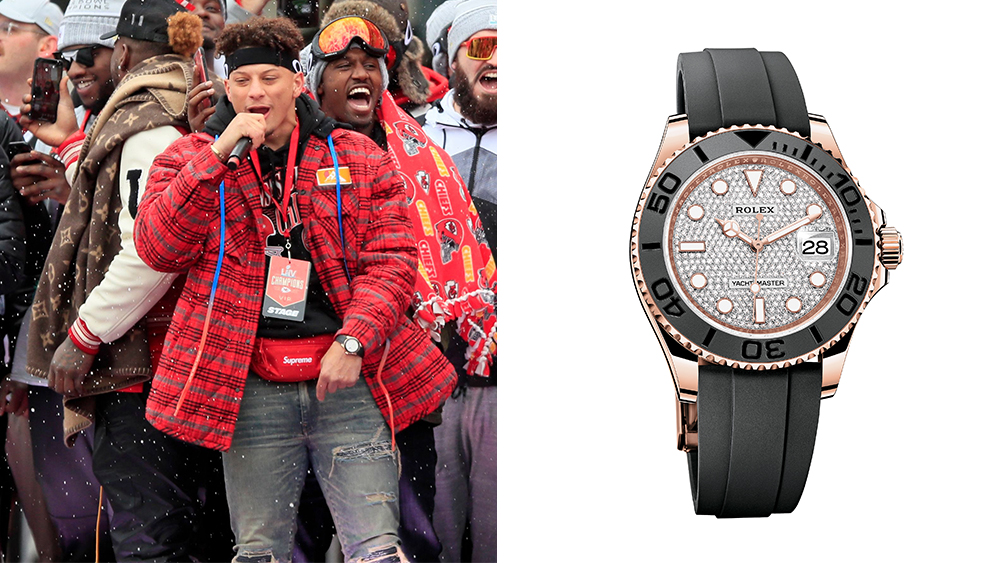 It looks like Patrick Mahomes walked away from the Super Bowl with more than just the Pete Rozelle trophy and a lifetime worth of bragging rights.

The Kansas City Chiefs quarterback joined his teammates for their impressive victory parade in Kansas City, Missouri earlier this week. Bundled in a red plaid jacket and large goggles (to protect his eyes from sprays of champagne) for most of the festivities, Mahomes was spotted wearing a very special Rolex Yacht-Master 40—in a configuration that retails for $47,150.

Attached to a handsome matte Oysterflex bracelet, its 40mm case is crafted from in the brand’s signature Everose gold. A true dive watch, its Cerachrom bezel is bi-directional. For an added touch of luxury, the watch’s dial is set with pave diamond. But it’s as functional as it is glittery: the Yacht-Master is water-resistant up to 100 meters and equipped with 70 hours of power reserve. Its Chromalight display has a long-lasting blue luminescence to help maintain visibility at night or in less-than-desirable conditions.

When it was introduced in 1992, the Yacht-Master was the first new model the venerable Swiss watchmaker had launched in 25 years. It was a crucial period for the brand as the leadership had recently changed from hands father to son and the business was keen to position itself for longevity. The watch’s design took elements of the by-then iconic Daytonas and Submariners that preceded it to produce something which felt fresh but well within Rolex’s well-known aesthetic. Its somewhat minimalist design has allowed it to age remarkably well, even among its classic peers.

Its sophisticated yet sporty vibe makes it a prime choice for Mahomes given his athletic abilities. The Super Bowl LIV game saw the Kansas City Chiefs making a strong comeback in the fourth quarter. The team was able to score an incredible 21 points during the last 15 minutes of play to best the San Francisco 49ers 31 to 20.