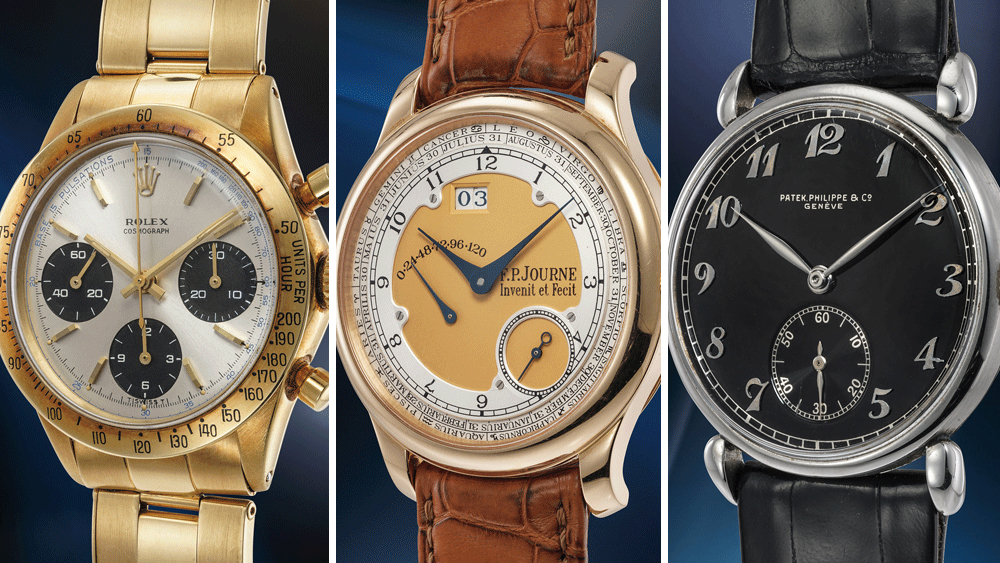 Phillips had a blockbuster weekend with two major watch sales, the Royal Oak 50th Anniversary Auction and the Geneva Watch Auction: XV, which collectively took in over $61.6 million.

The Royal Oak sale took place on May 6. Out of 88 lots offered, the top lot was the Royal Oak Ref. 5402ST known as “The A2”. It earned this nickname for being the second Royal Oak ever made and was presented to the world in 1972 at the opening of the Basel Watch Fair in Switzerland. It hammered for $1,073,319, five times its low pre-sale estimate, and set a world record for the most expensive vintage Royal Oak ever sold at auction.

The star lot wasn’t the only one to break records: the next highest lot broke the vaunted $1 million barrier. The Ref. 25654PT perpetual calendar in platinum sports a copper-brown dial and is double signed by Asprey. It managed to sell for double its pre-sale high estimate at a whopping $1,036,511 and now holds the world record for any perpetual calendar Royal Oak sold at auction. Fans of the late designer Karl Lagerfeld may be pleased to know a Royal Oak Jumbo, Ref. 5402ST once worn by the Chanel creative director also sold at the anniversary sale for $950,625.

Phillips then began the two-day auction period for its heavily anticipated Geneva Watch Auction: XV on May 7 and 8. The sale presented more than 600 in-person collectors and 1,800 online bidders with 196 coveted watches at La Réserve Hotel in the Swiss luxury capital. Its star lot was a Patek Phillipe Ref. 1518 perpetual calendar, known as the “Pink on Pink.” The model houses a pink chronograph atop a pink dial, hence the name, and “can only be found at the highest echelons of fine watch collecting,” according to the auction house. It sold for a staggering $3,333,926.

But it wasn’t the only lot from the sale to break records. The only known yellow gold Rolex with the reference number 6239—nicknamed “The Crazy Doc”—sold for $1,743,308 and set a new world record for its reference in yellow gold.

Another Patek Philippe also set a new selling standard. The Ref. 1503 dubbed “The Simon Wiesenthal” was once owned by the human rights champion and Holocaust survivor of the same name. It’s one of just two Ref. 1503s made with a black lacquered dial and Breguet numerals that are known of. Selling for $1,376,243, it holds the new world record for the reference.

“Once again, collectors’ appetite for rare and collectible timepieces of the highest quality, utmost rarity or of historical relevance and original designs has been demonstrated,” says Alexandre Ghotbi, head of watches, continental Europe and Middle East in a statement. “All of these elements resulted in yet another record-breaking sale at Phillips.”