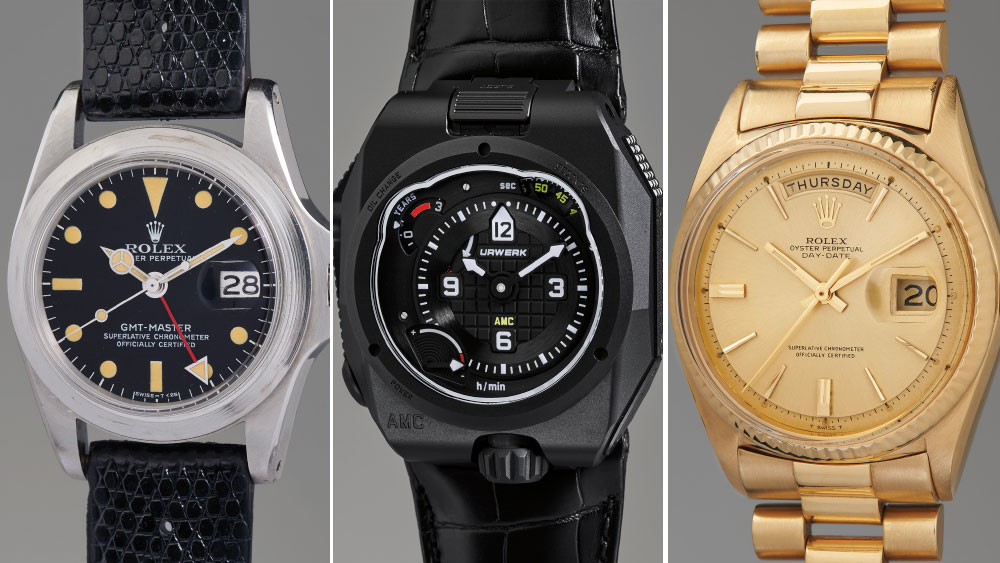 Last night Phillips auction house set yet another record for a watch sale with five watches that each sold for over $1 million. You might be surprised to hear that the top lot was neither Marlon Brando or Jack Nicklaus’ Rolex, but the Urwerk AMC, which went for $2.9 million. The watch, which looks (at least by modern standards) to be a normal wristwatch on its own, also comes in a pelican-style case that looks like it might detonate at any moment. And it is, in fact, atomic.

The AMC (Atomic Master Clock) is a very futuristic take on an ancient invention by Abraham-Louis Breguet known as a “Sympathique Clock.” Made in the 18th and 19th centuries, this type of clock had a system that could regulate, synchronize and wind a watch. Urwerk’s 81-pound modern interpretation took over 10 years to create. While it may sound like a glorified watch winder, the AMC is, in fact, a very complex mechanism—only two or three can be made per year—and is all about precision. According to Dominique Buser, head of Urwerk’s R&D department, the rubidium element built into the AMC is so precise that it will only gain or lose a second every 317 years. This is a piece for a serious lover of precision timekeeping…or someone with multi-millions of expendable income looking for the ultimate showpiece.

But the actual headliners leading up to the auction, which realized a total of $20,169,875 in sales, were Marlon Brando and Jack Nicklaus’ Rolexes. Brando’s Rolex GMT-Master ref. 1675 sold for $1,952,000 (final prices include buyer’s premiums and taxes), but not before an arduous round of bidding from collectors across three continents that lasted for 20 minutes.

Bids went up in relatively small increments of $10,000 after the price went up to $1,310,000 (before premiums and taxes). When one bidder, who phoned into a Phillips representative suggested the first price raise of just $10,000, auctioneer Aurel Bacs gingerly leaned over the podium and, in the vein of Brando in The Godfather, quipped, “What have I ever done for you to treat me so disrespectfully?” The crowd erupted in laughter, but bidding continued in this manner for some time until Bacs dropped a dose of auction psychology on the bidder. He pointed out to the bidder that if he or she had originally come out swinging with a $1.5 million bid in the beginning, it would have discouraged other competitors straight out of the gate without the price rising to its ultimate high price of $1.95 million. One online bidder in Japan raised the price to $1,560,000 (again this is without premiums and other fees factored in), which was the highest bid ever received by the auction house online. Ultimately, however, the hammer fell at $1,610,000 to a bidder on the phone with Alexandre Ghotbi, head of watches for Continental Europe and the Middle East at Phillips. “Maybe we just beat the record, not for a Rolex, but for the longest bidding,” joked Bacs.

Legendary golfer Jack Nicklaus’ watch had a more straightforward bidding process, resulting in a hammer price of $1.22 million—way above its low estimate of $100,000 and with the first bidder kicking it off at $500,000. The watch was given to Nicklaus in 1967 and he has worn it every single day since. It saw him through 12 of his 18 professional championship titles. “In 2017, it occurred to me that it has been 50 years that I’ve had this watch and I thought, ‘You know, why don’t we do something good with this watch?'” said Nicklaus at a panel discussion at Phillips the night before the auction. “We’re just getting ready to start a legacy fund, which is basically an endowment, and we’ll be putting this money into it so that we can not only just take care of kids, but take care of them forever.”

The money will be put towards helping children that cannot afford their care at Miami’s Nicklaus Children’s Hospital. Nicklaus was brought to tears during the panel discussion when talking about how much this moment and its cause meant to him and he even wrote a personal letter to the future buyer in Phillips auction catalog. An excerpt reads, “I will always have the memories that came with this very special watch—a companion of sorts that traveled the world with me for all these years. I honestly did not think any more memories would come my way in a life already so richly blessed, but when you raised that paddle one last time, you provided me one more memory that after today, we both can share!” Nicklaus and several members of his family watched the auction from above in a secluded room when he finally parted with his sentimental watch.

The other two watches that sold for over $1 million included a rare Patek Philippe “pink-on-pink” reference 1518, consigned from the original owner, which hammered in at $2.3 million and a Patek Philippe reference 2499 with rare round pushers, which sold for $2,024,000. Both are considered holy grail timepieces in watch collecting’s elite circles.