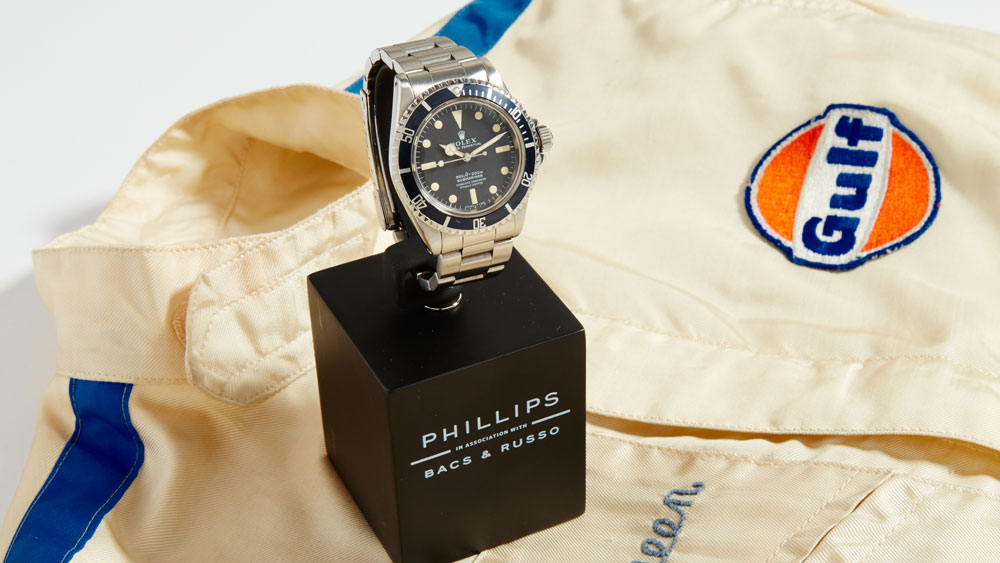 It was big news in the watch world when Phillips announced this past June that it would be putting Steve McQueen’s Rolex Submariner—the one gifted to his famed stuntman Loren Janes—up for auction on October 25th. It was almost, but not quite, as big as Paul Newman’s own Paul Newman Rolex Daytona that went up for sale at the auction house and ultimately ended selling for record-breaking $17.8 million.

But speculation about the provenance soon followed—the problem was that the timepiece could not be verified to have ever been worn by Steve McQueen himself. That’s a small matter to some, but a big problem for collectors planning shell out millions. Just last night the auction house took to Instagram to announce it would no longer be offering the timepiece.

“After careful consideration, Phillips has decided not to offer at auction the Rolex Submariner watch given by actor Steve McQueen to his friend and former stuntman, Loren Janes. We planned to offer the watch in good faith following extensive research by us and the larger watch community into the Submariner’s provenance. Since our initial announcement, however, the estate of Steve McQueen has disputed the watch’s provenance. While new information arose regarding the timing of McQueen’s gift and whether he wore the watch, we remain confident Steve McQueen gave the watch to Loren Janes based on further evidence and testimonials from people close to Steve McQueen and Loren Janes. Despite numerous attempts to engage in discussions with the McQueen family making clear that Phillips was committed to offering the watch with the corrected information, the family remains unsupportive of the sale. Phillips hoped the sale of this watch would celebrate the lives of two great men, but without the McQueen family’s support we are unable to proceed.”

When Loren Janes passed away at the age of 85 last June, Phillips had pounced. The story the auction house told about the watch was that the Rolex Submariner reference 5513 was the earliest McQueen-owned Submariner known, and was reportedly purchased by the actor in the ‘60s. As the story goes, it was later given to Loren Janes as a gift in the mid-to-late ‘70s with the engraving in all caps on the back of the timepiece: “TO LOREN, THE BEST DAMN STUNTMAN IN THE WORLD. STEVE”

The watch was to come with a letter signed by Janes on February 22, 2017 attesting to its provenance along with photos from Rolex documenting its restoration and the book Steve McQueen: A Life in Pictures, which supposedly shows McQueen wearing the watch. However, Janes passed away from Alzheimer’s disease on June 24, 2017.

The Steve McQueen Rolex Submariner was previously thought to be lost in the 2016 wildfire outside of Los Angeles that destroyed 40,000 acres of land, including the home of Loren Janes and his wife. Nearly all of Janes’s personal belongings and film memorabilia were lost, but the family was urged to search for the Rolex due to its durability. It was found a few days later and was sent to be restored by Rolex. Even so, a small bit of soot residue is still present on the Rolex bracelet clasp and the caseback.

The watch, as a result of restoration, has a matte, four-line 5512 dial even though the timepiece is a 5513 from the mid-‘60s. The questions of provenance lie in whether or not the watch has been further tampered with since Rolex restored it—watch restoration is a tricky minefield in the world of auctions and collection—and whether or not this was Steve McQueen’s watch that he gifted to a friend or whether this was a watch he purchased solely to be worn by Janes.

Regardless, what’s clear is that the McQueen family does not want the watch sold, some information from Phillips may have been inaccurate, and for those collectors who don’t give a damn whether McQueen wore it or not, it will likely never be available again.