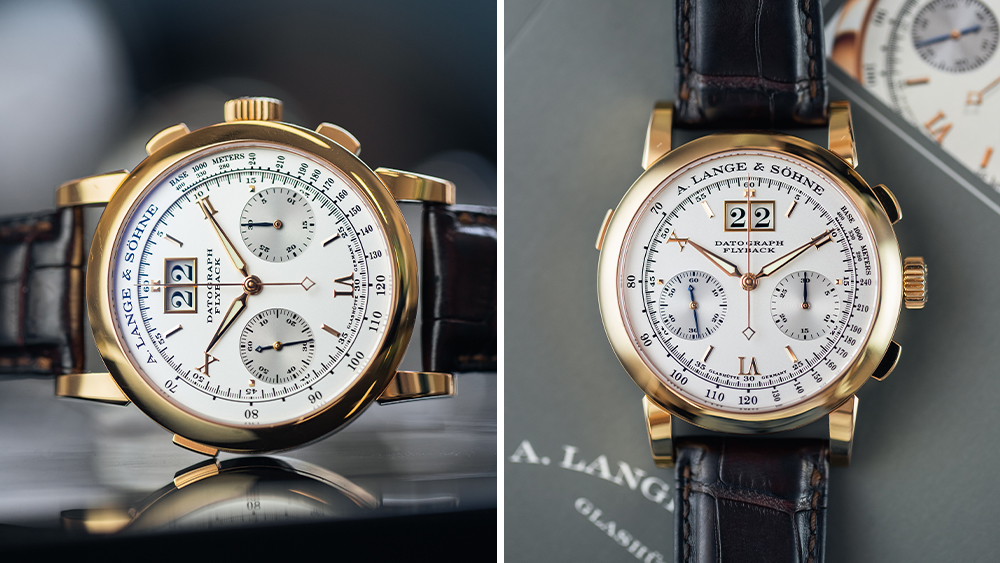 It’s raining Langes in London—or at least that’s what the forecast calls for next week.

From March 9 to 14, Phillips Perpetual—the auction house’s private selling space for watches in the U.K. at 30 Berkeley Square—will host an exhibition focused solely on early A. Lange & Söhne Datograph and Lange 1 timepieces from 1994 to 2008. The assortment included in the show took 18 months to curate and comes directly from the hands of collectors around the globe. That means they are not for sale. Instead, they are meant to offer a deep dive into the scholarship of the Datograph and Lange 1 models.

“A lot of what we’ve been working on really hasn’t been spoken about before,” James Marks, international head and director of Phillips Perpetual, told Robb Report. “We’ve gone into great details, to go as far as studying hallmarks on the casebacks of very early solid caseback watches from the mid-nineties or the first production watches that Lange released following the relaunch of the brand.” The idea is to educate both newcomers curious about the watchmaker, as well as current fans who want to beef up on their knowledge. The exhibition will strive to show Lange enthusiasts the details and differences in everything from dial nuances and cases to references and limited-production models, so that, according to Marks, “people that want to go to auction in the future, or want to buy a Lange in the future, have that confidence to know what they’re looking at.”

To that end, the boutique will also have Lange pieces on view that will be part of Phillips’ upcoming auction season in Geneva, Hong Kong and New York. “It’s very much a global exhibition for Phillips, including all of our sale locations for the lovers of Lange,” said Marks. “It encapsulates everything you’re going to see from Phillips in the next six months.” One of the highlights? A mid-’90s platinum, black-dial Lange 1 reference 101.035, which will hit the block at Phillips Hong Kong watch auction.

Looking to walk out with some wrist candy from the German watchmaker? The good news is Phillips Perpetual will also have 20 timepieces from the brand available for private sale. They include everything from a gem-set platinum Datograph reference 815.036 and a blue-dial Lange 1 reference 191.028 to modern examples such as a first-generation steel Odysseus (Lange’s dressed-up stab at a sportier-looking timepiece).

The fanfare over the elite German watchmaking house was solely a passion project for Marks. He says the company was not involved in sponsoring the exhibition. “It’s a brand that I personally love,” says Marks. “I love the quality of the watches they produce. They have a very unique design aesthetic.”